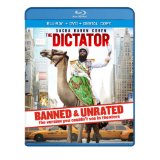 There’s obviously nothing funny about the atrocities committed by some of history’s most notorious tyrants. So why have these men proven to be such a surprisingly fertile source of comedy? Whether it’s (Puppet) Kim Jong-il crooning forlornly about being lonely (actually “ronery”) in Team America: World Police or Adolf Hitler being saluted by a chorus line of high-stepping stormtroopers in The Producers, there’s certainly a precedent for mocking these reviled figures. With The Dictator, Sacha Baron Cohen appears to be taking his patented inappropriateness to a new level. END_OF_DOCUMENT_TOKEN_TO_BE_REPLACED

Posted in Disc Reviews by Gino Sassani on December 31st, 2008

There are a ton of parallels between the Chris Farley/David Spade comedy team and that of John Belushi/Dan Aykroyd. Both teams began in the Saturday Night Live arena. It was that physical big/little guy combination that has its roots with Laurel and Hardy, and Abbott and Costello. Both teams were at the height of their careers when a drug overdose would claim the wilder member of the team. Both of the deceased comedians left behind at least one successful brother to carry on the name in show business. Tommy Boy was by far the best of the films this duo made before Farley’s tragic overdose in 1997. END_OF_DOCUMENT_TOKEN_TO_BE_REPLACED