Posted in Disc Reviews by Michael Durr on February 18th, 2020 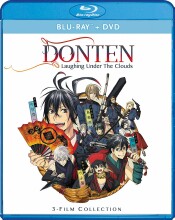 Getting thrown into the middle of a film or television series is a daunting task, especially when you can’t just reach out and grab the source material.  For example, today’s review are three films that are set after a manga book collection as well as a 13-episode television series that is available on Blu-ray, but by another production house and would cost me thirty bucks.  Hardly an ideal situation, but one I wasn’t going to back down from.  Donten: Laughing Under the Clouds – Gaiden is our review today and tries to tell us in nearly three hours what happens after the Yamainu take down the Orochi and the struggle to lead normal lives in the wake of such a cataclysmic event.