Posted in Disc Reviews by Michael Durr on September 13th, 2022 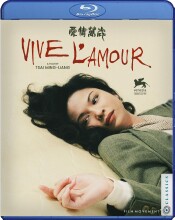 The people of Taiwan have been searching for an identity for a long time.  When martial law was lifted over the People’s Republic of China in the 1980’s and shifted to a more democratic form, the people have increasingly wanted their own identity and no longer to be known as a part of China.  Sure, they might maintain the status quo and appear to work with China (which hasn’t been exactly the case lately), but they strive to be known as Taiwanese, separate from the mainland influence.  Our film today, Vive L’Amour, takes place in the 1990’s Taiwan, where life was extremely hard for the average young adult.   So hard that many of them didn’t even have a permanent residence.
END_OF_DOCUMENT_TOKEN_TO_BE_REPLACED