Posted in Disc Reviews by Brent Lorentson on September 3rd, 2014 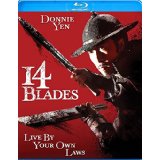 Right now in the martial arts world I don’t believe there is a bigger star than Donnie Yen.  From his work in Iron Monkey to his modern classic Ip Man, Yen shows he is nearly an unstoppable force in the martial arts world, and when his name is involved with a project, you should be ready for a spectacle.  His fight choreography is stunning to say the least, and despite the genre of film, he’s able to keep his fight scenes grounded in reality.  Now teamed with director Daniel Lee who brought us Black Mask, 14 Blades is on first glance the kind of movie martial arts fans should get excited about. END_OF_DOCUMENT_TOKEN_TO_BE_REPLACED

Retelling of classic tales has been a fodder for movie scripts for years. Take something that has worked for ages, spin it just so and you got a movie that might be gold. They have been doing this with Romeo & Juliet for years. The results can be great or sometimes they are one step of having the creator roll around in his grave with pain and anguish. Take Hamlet for example, the classic Shakespearian tale about a prince who takes revenge on his uncle Claudius who has murdered his father the King and taken the throne and the king’s wife too. It has treachery, corruption and a little good ole fashioned incest to wet the palette. Now take that piece of journalistic tragedy and set it after the fall of the Tang Dynasty in China. Insert popular Asian actors like Ziyi Zhang & Daniel Wu and you might just have something.
END_OF_DOCUMENT_TOKEN_TO_BE_REPLACED