That Obscure Object of Desire (Blu-ray) 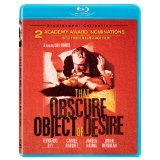 Early on in Luis Buñuel’s surrealist gem, a mild-mannered older gentleman named Mathieu douses a beautiful, battered woman with a bucket of water as she desperately attempts to board the train he’s riding. His fellow passengers are stunned, but also understandably intrigued. What possible sequence of events could’ve led Mathieu to this cold and cartoonish gesture? It’s an irresistible hook, and Mathieu proceeds to regale the other travelers — END_OF_DOCUMENT_TOKEN_TO_BE_REPLACED 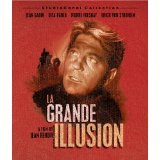 You know how Citizen Kane is considered by some to be the greatest film of all time? Well, I’m the kind of curious movie nerd who subsequently wonders which film was atop Kane auteur Orson Welles’ personal list. Unfortunately, I can’t ask him, but there’s evidence suggesting the answer was Jean Renoir’s La Grande Illusion/Grand Illusion. END_OF_DOCUMENT_TOKEN_TO_BE_REPLACED