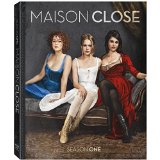 “No woman dreams of entering this profession. But it is a real profession…”

In fact, it’s commonly referred to as “the world’s oldest profession.” We’re talking, of course, about practice prostitution. The profession also happens to be the focus of the soapy, serialized Maison Close, which is set in a 19th century Parisian brothel. And thanks to Music Box Films, Season 1 of the French prostitution drama is now making its U.S. Blu-ray debut. END_OF_DOCUMENT_TOKEN_TO_BE_REPLACED