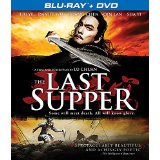 “Kings are made, not born.”

It’s a provocative thesis for any story, especially since the same debate about kings has played out over centuries’ worth of world history. Unfortunately, filmmaker Lu Chuan largely decided to take a “tell, don’t show” approach with The Last Supper, which depicts the last gasp of China’s Qin dynasty and the rise of the Han dynasty and its commoner-turned-emperor. END_OF_DOCUMENT_TOKEN_TO_BE_REPLACED