Posted in Blog Posts, Phil on Film by Archive Authors on November 13th, 2007 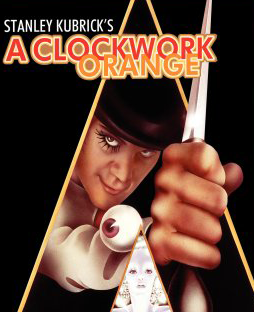 [Editor’s Note: Phil emailed us an impassioned commentary on the recent HD DVD release of “A Clockwork Orange” – which seemed like it should be shared with the world. I asked Phil if he wanted to re-work as a guest post, which he did, and here we are – Welcome aboard, Phil!]

Hello, and who am I?

I’m Phil Smoot, born and live in North Carolina, will be 57 a few days before Christmas of this year (2007), and I have been invited to be an occasional contributor to UpcomingDiscs.com.

Well, maybe Geritol is a potential sponsor for the site [Not yet, but we’d be happy to take their money – ed], but I hope it has more to do with my background and passion of film (and video and electronic media and tomorrow land—the real one, not just the Disney park rides).

Background? What’s some guy from Asheboro, NC, got to offer? (Yeah, Asheboro, where the only thing of note is that the state has one of the few natural habitat zoo’s in the world. I live close enough to apes, lions, polar bears and other predators that make me feel right at home in the film industry).

Okay, I love new technology, and I’m excited about the future, and I have some history in film. I’ve worked on some 65 to 70 feature length motion pictures —And continue to do so and hope to do so for many years to come–plus some 3,000 commercials, short films, industrials and TV productions. In 1973, I graduated from The University of North Carolina at Chapel Hill (UNC-CH) with a double major in Radio-TV-Motion Pictures (RTVMP, a department that is no longer there but combined with Communications) and Dramatic Art (whatever that means, I just had enough credits to add it to my diploma).
END_OF_DOCUMENT_TOKEN_TO_BE_REPLACED