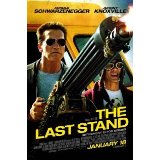 “You don’t want to take the silver, you take the lead”.

He always told us he’d be back. After spending some years in the real world in the California governor’s mansion, Arnold Schwarzenegger is indeed back…back in the reel world where he belongs. And if The Last Stand is any indication, it appears Arnie hasn’t missed a beat. In fact, he’s showing a bit of maturity in his acting that I honestly never would have believed possible back in the early days. Here Arnie’s more Dirty Harry than Terminator. Throw in a little modern Spaghetti Western and more than a little help from Korean director Jee-woon Kim and you have a pretty tasty treat. It might not be all that nutritional or filling, but as guilty pleasures go, you can do a lot worse than The Last Stand.

Gabriel Cortez (Noriega) is one of the world’s biggest drug kingpins, and he’s in Federal custody. Federal Agent John Bannister (Whitaker) is in charge of getting him to death row. We know there’s going to be trouble as soon as he tells his team they can’t do anything conspicuous and then proceed in a caravan of obviously government vehicles. Of course, Cortez has a crew waiting and he gets sprung in a scene out of The Brinks Job. He’s been racing cars since he was a kid, so you can expect a lot of fast and furious driving as he attempts to get to Mexico before the feds can stop him.. He’s got everything he needs. He’s got a sweet ride that does 200mph. He’s got an army of people who have more equipment than most small countries. Whoever he can’t run over, he can pay off. He’s got everything going for him, except for one thing.

Enter Sheriff Ray Owens (Schwarzenegger). He was once an L.A. narcotics detective who has settled down as sheriff of the small Arizona border town. It’s the quiet life. One of his deputies, Gerry (Gilford) is introduced trying to shoot a Dirty Harry-style handgun. He appears as competent as Don Knotts. It’s a young and inexperienced team, but there’s really no need for anything more. But now Cortez has chosen this sleepy town to get across the border. Ray’s team is the only thing standing in the way of an army. We’re talking Ray, Barney Fife, Deputy Sarah (Alexander) and Mike (Guzman), a jailbird fresh from Iraq and a crazy survivalist gun-nut that happens to have some “legally ambiguous” firepower in his barn.

The result is more entertaining than you might think. No one really gave this film much of a chance at being very good. It was Arnie’s first time back at bat, and the release time would seem to indicate anything but a good effort. If you were in that category you didn’t give enough credit to director Kim, and that was your first mistake. Kim might not have a large resume here in the States, but that’s all about to change. It’s obvious from the start that he has a grasp of the formula needed to make this a lot of fun. There’s just the right amount of humor to keep the film light and to remind us that we’re all just having fun here. The amount of firepower and destruction might appear counter to that idea, but I can promise you a good time all the same. Kim manages to turn this into more than just the farce the trailers make it appear like. This is old-school all the way. What you have is a good old-fashioned Western last stand, just as the title would indicate. Arnie does his best Clint Eastwood imitation and doesn’t try to play against the years his body has seen since he was at his prime. Instead Kim allows this to become a personality-driven film where the action is the three-ring-circus platform for the performances. Certainly, there are stunts that will make you roll your eyes, and some of the action is downright silly. This is the kind of film where the biggest cheer in our screening went to a little old lady who deals with an intruder. It’s the common man defending his town kind of film that answers Uncle Joe Biden’s question about why we need more than 10 rounds in a magazine. The last half hour is non-stop demolition and firefight.

You forgive the silliness because the cast gives keeps our attention away from the man behind the curtain. Forest Whitaker is always a strong presence and is frankly underused here. Luis Guzman is one of the best at comic relief, and he doesn’t disappoint here. You might remember Jamie Alexander from Thor. She’s an emerging young actress who works quite nicely here. There’s a reason why her part has been expanded in the forthcoming sequel. Eduardo Noriega is a wickedly fun bad guy. Most of the film he spends behind the wheel, but he leaves us in tantalizing anticipation of the expected showdown with Arnie. This is a solid performance by Arnold. He knows his limitations and plays to them. This is the kind of film that can extend his career another decade or more into the future.

Most of all I love the angle of a modern Spaghetti Western, with plenty of red sauce. Kim pays wonderful tribute to Leone. The influence is obvious to even the most casual filmgoer. There are magnificent homage moments to the talents of composer Ennio Morricone. Everything from the staging to the pacing borrows from that genre. The film is the missing link between The Man With No Name and Harry Callahan, only it’s Arnold Schwarzenegger who provides the missing link. It’s no surprise that Kim’s most praised films is The Good The Bad And The Weird. He doesn’t take any pains to hide his influences. Yet he borrows with originality that makes this film a bit of fresh air quite honestly. It might be his first American film, but it won’t be his last. I’m not at all sure we’ve even seen the last of Sheriff Ray Owens. I’m up for another round. Let’s get rolling on that “before I change my mind“.

Gino Sassani is a member of the Southeastern Film Critic's Association (SEFCA). He is a film and television critic based in Tampa, Florida. He's also the Senior Editor here at Upcomingdiscs. Gino started reviewing films in the early 1990's as a segment of his local television show Focus. He's an award-winning recording artist for Omega Records. Gino is currently working on his 8th album Merchants & Mercenaries. Gino took over Upcomingdiscs Dec 1, 2008. He works out of a home theater he calls The Reel World. Favorite films: The Godfather, The Godfather Part II, The Body Snatcher (Val Lewton film with Karloff and Lugosi, not the pod people film), Unforgiven, Gladiator, The Lion King, Jaws, Son Of Frankenstein, The Good, The Bad And The Ugly, and Monsters, Inc.
Broken City Chris Hardwick – Mandroid