Posted in: Disc Reviews by William O'Donnell on January 19th, 2013 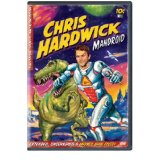 Chris Hardwick is a card carrying, flag-waving nerd. He is very proud of said nerdiness and has devoted the lion’s share of his career expressing this. Probably best known for his various hosting duties, especially for the Nerdist podcasts, Hardwick gets to display his stand-up chops in his first, full-length DVD special and he does not disappoint.

Mandroid (if the title was the first hint) is certainly for the nerds. There are references throughout that may not be fully understood by those who have not been initiated into nerd kingdom. Though if you are a part of said kingdom, Hardwick may well be the leading jester. Also, if you a “nerd” (by nature or by choice) you could set up a pretty nice drinking game for every time he uses a Harry Potter reference..just sayin’…

Though his nerdiness is unavoidable, you do not actually need to be one to see that Hardwick is still a talented and endearing comedian. This special runs the standard hour that Comedy Central allots for stand-ups, and Hardwick sets a nice pace throughout.

And you’ve got to respect a man who only wishes to leave us with one important message: “don’t have sex with animals.”

Dolby Digital 2.0 Stereo. The stereo setup means it’s not the most immersive experience but then again, we’re looking at the show just as a live audience would so the sound may as well remain in the front speakerss.

Abraham Lincoln: The banter between these two best friends (Hardick and his music partner Mike Phirman) is charming and amusing. This song is crass while offering some chuckles. Short and to the point with their gag.

El Corazon: A very funny song that’s performed completely in Spanish. It sounds like a sensual love song (it really does) but the lyrics are literally about how the heart works. Aorta’s have never sounded sexier.

Totally Hidden Easter Egg: A technical difficulty forces the first song by Hard n’ Phirm to be delayed. The lads amuse themselves and the audience as things get sorted out. A rare treat that normally only live audiences get to see.

Very funny stuff, but this will likely be strictly for the nerds I mentioned a million times in this review, though that shouldn’t be a worry if sales are a concern as there are PLENTY of nerds out there willing to spend their dough…I mean…just look at how much money the makers of Halo, Harry Potter and people like George Lucas seem to be making every year.