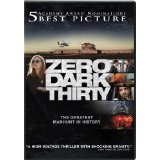 I remember the exact moment I learned about this film. I was at the movies; it was the first trailer on the film, and I immediately felt my intrigue build. The trailer didn’t give much away; at the time it felt like a disassembled puzzle joined together by multiple voiceovers, and then the question that tied it altogether was asked: “When was the last time you saw Bin Laden?” After that everything became clear, and I had my first inkling of how important this film was going to be. Once I learned that Kathryn Bigelow would be in the driver seat, I was certain of the film’s importance.

The film starts off with a solid opening, possibly the most fitting opening for the film: black screen and a 911 transmission from a woman trapped inside the World Trade Center on September 11th shortly after the plane crashed into the building. Cut to 2003; we are introduced to Dan (Jason Clarke, Lawless), a veteran C.I.A. interrogator and Maya (Jessica Chastain, Lawless), a newly assigned rookie agent. At a C.I.A. black site (a C.I.A. controlled holding facility for the detainment of enemy combatants), the two interrogate a low-level Al-Qaeda operative for information that will ultimately help bring them closer to their primary target, Osama Bin Laden.

Maya is a brazen yet dedicated officer who has committed every waking hour of her day to hunting down the man who caused the most devastating attack ever on U.S. soil. She has no friends outside of work, no family that she keeps in touch with (at least none that is shown); her whole life is rooted in this pursuit.

Her journey spans different countries and many years. She watches friends leave or die and has attempts made on her life, but she never loses focus on her goal, a goal that she ultimately saw achieved on May 1, 2011 (or technically May 2 given what the title of the film means) with Operation Neptune Spear.

I have been waiting over a year for the release of this film, and usually when you wait that long for a film it turns out to be not all you were expecting it to be. I didn’t have that problem with Zero Dark Thirty, because I ultimately had no idea what to expect. Intentionally I denied myself all the details about the raid and the process leading up to it, because I wanted to see it here. And because I chose to handle it that way, I got to be taken on the ride. It was an unpredictable thriller that took me by surprise with several spontaneous events.

Chastain made the movie for me; she truly commits. In the beginning, she starts out conveying the necessary vulnerability for a rookie agent in a hostile environment, and gradually as the years go on, she grows tougher until she becomes a seasoned vet unafraid to openly express her opinion to her superiors. Jason Clarke makes his presence known early on in the movie, but sadly he becomes insignificant midway through. His interrogation scenes brought him to the forefront of the film; he becomes a vital character and then is relegated to a second-tier character who only appears sporadically, a true underutilization of his talents.

Perhaps the most important part of the film would be the human component. Bigelow does an excellent job of focusing the film on the people waging the war. She manages to capture the strain that this ten year manhunt caused on the men and women over there, some of whom gave their lives in this pursuit. She brought their sacrifice to light.

Lastly I’d like to address all the controversy around the film for its depiction of the use of enhanced interrogation techniques on enemy combatants. It’s been said that the film goes too far, and that Bigelow is milking it to add extra drama to the film. After watching it I have only one question for these people: “Are you serious?” What I saw was in no way bad enough for this kind of uprising. Compared to such films as Unthinkable, what is depicted in Zero Dark Thirty is actually quite tame. Clearly people are out to make it seem worse than it is, and that is nonsense. That portion of the film is brief, it’s not lingered on, and truthfully nothing shown will damage the credibility of this great nation in my opinion. I mean, come on people, it’s just a movie.

Jeremy Butler is a film school graduate of the International Academy of Design and Technology. He is been writing for Upcomingdiscs since 2012; however, movies have played a big part of his life for much longer. Favorite genres include horror, science fiction/fantasy, and comedy. Favorite movies are V for Vendetta, Boondocks Saints, Kiss Kiss Bang Bang, and The Godfather.
The Mob Doctor: The Complete Series Cirque Du Soleil – Worlds Away (Blu-Ray)