Posted in: Disc Reviews by William O'Donnell on March 18th, 2013 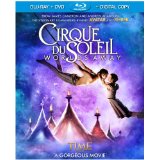 Worlds Away is the tale of a young woman named Mia who happens across a debilitated circus, where she is enchanted by the performance of an Aerialist. Mid-performance, both she and the aerialist are sucked into a parallel universe that is littered with strange, seemingly supernatural circuses. Both are lead from performance to performance in an attempt to escape, or at least find each other.

Each performance we see is taken from a pre-existing Cirque Du Soleil show (most of which a part of their Las Vegas lineup). Only the portions featuring Mia and the aerialist traveling to, through and from them are unique to this film. The story is not new to the Cirque world as I have seen the story of someone brought into the magical/surreal world of amazing acrobats many a time before. The idea is to have the audience identify with that character and share in their awe of these uncanny performers.

There is a significant amount of segments borrowed from the popular Beatles LOVE show. While the widely recognizable Beatles songs that accompany these acts make them, perhaps, the most universally accessible parts of this film, I find them to be the most non sequitur (which says a lot coming from a Cirque Du Soleil story) and least entertaining portions. I suppose this is due to my person preference for the outstanding acrobatics and feats of physical ability, and the Beatles segments are largely theatrical in that there are more clowns and interpretive dance than anything else. Because of this I suspect that they are included simply to gain that aforementioned accessibility by grabbing audience members with popular/familiar music.

The true highlights for me were the segments taken from the show KA. Firstly, their characters add great elements of conflict for our two lead characters to be sucked into. KA is a classic good vs evil scenario and our hero Aerialist is placed in, what seems like, a circus underworld by sinister looking characters. Without any dialogue, they easily convey moments of struggle, thrilling combat, and opposing powers who are each attempting to claim our heroes. While all the others segments taken from various Cirque shows seem like spectacles for our main characters to experience, KA immerses them into a their story and moves the film’s plot along.

Secondly, the stunts performed by the KA acrobats are truly stunning. I would rewatch their portions at least three times before moving onto the rest of the film. I could not look away as a demonic acrobat risked his life to move within a gigantic spinning wheel; or when a group of villains chased innocent folks up a vertical plain while dodging arrows in a combat scene that evolved into a gigantic game of Plinko, if you can imagine that game if humans were the descending ball. My heart races just by recalling it in my head.

Writer/Director Andrew Adamson, with the aid of James Cameron, has a great eye for capturing the dynamics of these circus acts. Cirque du Soleil has been capture on film many a time before but this time around, 3D cameras were used. While the copy I viewed was not a 3D presentation, there is a certain style that goes with filming 3D action, meaning there were some unique choices for angles and closeups, choices that may not have been made had it been shot in strictly 2D film, that ended up matching the action extremely well.

1080p HD Widescreen 1.85:1. Though it often has well-crafted music, Cirque Du Soleil is very much a visual experience. There were only a couple of slow-motion shots during the first KA sequence where the picture quality was slightly fuzzy. Other than that, the picture looks very clean, be it acrobatic action taken from the stage show, or scenes that only exist in the film and contain a touch of CGI.

When a Blu Ray wishes to showcase how pristine its picture quality can be, they often display scenes with water since water is one of the few tangible objects that, by nature, can display transparent clarity along with sparkling reflections. Worlds Away has many sequences from the live show “O” which is melds acrobatics and dance with water, sometimes in a Busby Berkley sort of way, and certainly makes for a lovely display of picture clarity.

Enlgish 5.1 DTS-HD Master Audio is the main track with the options of Dolby Digital 5.1 available in French, Spanish, Portuguese. Subtitles are available in the same languages.

There is barely any dialogue but there is music throughout and it is deftly mixed through all the speakers. No errors and nice clarity of sound.

A Day in the Life with Erica Linz: A backstage look at the many rehearsals that Linz and three of her fellow performers go through for a new piece. These strong performers, even in the mildest of practices are spectacular to behold. AS well, we see a tiny bit of Worlds Away directors Andrew Adamson and James Cameron at work for one of the shoots.

Making Worlds Away: Could have been a great opportunity to see some fascinating behind the scenes footage, and some insight by the director(s) but this winds up being little more than a bloated trailer for the film you’ve already watched.

Las Vegas Trailers: A quick-cutting trailer for the many Cirque du Soleil shows that are happening in Las Vegas.

This film is like a highlight reel of the last few Cirque Du Soleil productions. It is a same buy for longtime fans and newcomers, since you get a decently eclectic sampling of what these performers are capable of. I personally would have opted for more stunts and acrobatic performances than the clowning (except the one on fire…that was fantastic) or dances, but that’s just my bias.