The Mob Doctor: The Complete Series 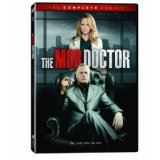 If the last few decades are any indication, TV viewers can’t get enough medical shows, while mob dramas seem to develop some of the most fervent followings. The Mob Doctor — the Fox drama canceled shortly after its debut last fall — suggests those two great tastes don’t necessarily taste great together. The network wound up airing all 13 episodes, and now Sony has released every installment of the watchable, uneven drama on DVD.

To help settle a debt accrued by her loser brother Nate (Jesse Lee Sofer), Grace has agreed to perform medical services for the mob. When we meet her, Grace is working for volatile gangster Paul Moretti (Michael Rapaport) and Moretti’s right-hand man Franco (James Carpinello), who Grace used to date. Eventually, her services are transferred to legendary mobster Constantine Alexander (William Forsythe). The Mob Doctor is based on the book “Il Dottore: The Double Life of a Mafia Doctor” by Ron Felber. And if you think the show’s title is silly — the network’s top dog clearly wasn’t a fan — just be glad they didn’t go with the original working title: Dirty Medicine. (Yikes!)

Despite announcing its cancellation after eight episodes, Fox aired five more installments, which allowed producers to bring the story to something resembling a conclusion. Sure, Ep. 13/“Life and Death” played more like a season finale than a series finale, but at least fans got their finale. I realize the goal of pretty much every TV series is to run forever — or at least last long enough to be sold into syndication — but The Mob Doctor began straining credulity even in its abbreviated run. (For example, we see Grace yank a screwdriver out of a low-level stooge’s head in the pilot, but by Ep. 11/“Sibling Rivalry” she’s already treating a mafioso’s thoroughbred for an erection that won’t go away. You read that right.) The procedural template established by creators Josh Berman and Rob Wright was barely believable for 13 episodes, so I don’t see how everyone in Grace’s life could’ve been kept in the dark for six or seven seasons. In other words, all TV stories aren’t created equal and some just aren’t meant to be told over 100 episodes.

Spiro shouldn’t be out of work for very long after her impressive work in the title role. The actress brings the same Chicago-style toughness we saw in her starring role on TBS’s My Boys without coming across as harsh. Grace is a little all-over-the-place as a character — she’s a tough chick from the south side of Chicago (where the show also filmed) with a thing for bad boys, but she’s also a softie who overempathizes with all of her patients — yet Spiro’s vulnerable performance helps keep the show somewhat grounded. Meanwhile, Forsythe draws on a resume stuffed with tough-guy roles to play Constantine. The actor is scary and slick while rarely raising his voice above a weary rumble. The show establishes early on that Constantine has a long-standing connection to Grace’s family, and Spiro and Forsythe sell their characters’ easy familiarity even though they usually meet up under dire circumstances.

The rest of the cast is a mixed bag. Ivanek (Damages, Oz, Heroes) has been a professional — and Emmy winning — bad guy on TV for a long time, so I enjoyed seeing him as someone who actually supported our protagonist. Gilford is fine in his generic boyfriend role, but only gets interesting as Brett gets increasingly and understandably impatient with Grace’s frequent absences. (Then again, I admit to having a strong bias toward anyone involved with Friday Night Lights.) The writers seemed to be going places with Nurse Ro and Olivia, but their characters’ development was a casualty of the show’s cancellation, so Lima and Kirchner wound up playing just one dimension. On the mob side, I liked Carpinello as the conflicted Franco — which probably made him a better match for Grace — but Nate’s stupidity was often so infuriating, the show could’ve also been called My Idiot Brother. (Sofer did the best he could.) Besides Rapaport’s wildly over-the-top performance, the show featured guest appearances by Michael Madsen and Jennifer Beals as members of the criminal underworld.

The biggest problem with The Mob Doctor is that it tried to be both a full-service medical drama and mob saga, and ultimately came up short on both counts. In my opinion, the show would’ve been better off as a straight-up medical drama with a mob twist. Instead, the mafia side of things is beefed up to the point where we get a prolonged storyline about gambling ordinances and video poker machines in bars that is exactly as exciting as it sounds. As a result, Constantine’s plan to unite Chicago’s entire criminal element feels puny and underdeveloped. (Especially when people have astronomically high mob standards thanks to The Sopranos and Boardwalk Empire.) Meanwhile, the unconventional medical stories in the hospital — a priest who claims to be possessed by a demon; a woman with prostrate cancer — only make the show feel like a poor man’s version of House (which, coincidentally, The Mob Doctor replaced on Monday nights).

The Mob Doctor had an uphill climb from the beginning — replacing a long-standing hit; its comically blunt title — so it’s not hard to see why it ultimately faltered. Since most people aren’t in a hurry to discuss a failed show, the lack of special features on this DVD set is understandable. (However, the decision to stack all three discs on top of each other inside the case is unforgivable.) On the other hand, I don’t think it’s the worst thing in the world that The Mob Doctor only lasted 13 episodes; fans can think of this DVD set as a tight, engaging miniseries.