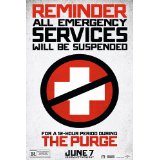 “Commencing at the siren, any and all crime — up to and including murder — will be legal for 12 continuous hours. Blessed be our new Founding Fathers and America, a nation reborn.”

You know writer-director James DeMonaco has a killer concept on his hands because the plot for this movie is simultaneously outlandish and thought-provoking. Unfortunately, The Purge ends up being a prime example of when bad movies happen to great ideas.

It’s 2022 in America. Unemployment is down to one percent and crime is at an all-time low. The cause of these too-good-to-be true statistics is the annual ritual known as the Purge, a 12-hour time period where any and all crime is legal, allowing people to indulge the violent impulses they keep bottled up inside. James Sandin (Ethan Hawke) has made quite a bit of money selling suburban security systems for Purge Day. Unfortunately, his wife Mary (Lena Headey) is the one who receives most of the dirty looks from their envious neighbors. We catch up with the well-off Sandin family, which also includes surly teenage daughter Zoey (Adelaide Kane) and kind-hearted son Charlie (Max Burkholder), a little more than an hour before latest Purge.

After the family settles in to ride out the lawless evening, the arrival of a desperate, intrusive stranger (Edwin Hodge) threatens their safety. The Sandin family is eventually torn apart as they try to decide whether to hand over their uninvited guest to the gang of preppy killers outside their door.

The Purge is the latest effort from Blumhouse Productions, which specializes in micro-budget horror films like Sinister (also starring Hawke) and Insidious. The film follows the familiar template, confining the majority of the action to a single location and keeping the number of speaking parts relatively low.

As I mentioned earlier, I really like everything about the set-up for this movie. I like how DeMonaco set his film less than 10 years from now, which makes the far-out concept of a Purge Day seem like it could be right around the corner if the dissatisfaction many Americans currently feel were to reach its most extreme boiling point. I like the pairing of Debussy’s “Claire de Lune” with brutal footage from previous Purge Days over the opening credits. (You can imagine some of the more upscale members of society holing up and listening to some classical music as the violence plays out on their screens.) I like the suggestion that the Purge is secretly a way to wipe out the lower class; or at least those who can’t afford fancy security systems. I like the perverse notion that the most compassionate Sandin (Charlie) is also the one audiences will yell at the loudest. I even like the little details, including the fact that certain federal employees are exempt from Purge Day. (So don’t get any ideas about storming the White House.)

So while the set-up is stellar, the execution is a crushing disappointment. Everything about the way DeMonaco presents his story is predictable, clichéd and feels totally telegraphed. The director squanders an exciting premise by obsessively hitting every horror movie beat he could think of. A character closing a refrigerator and being startled by someone suddenly standing there? Check. Someone getting dangerously close to a body that may or may not be dead? Check! A character “surprisingly” being saved a moment before a killer is about to execute them? Triple check! (I’m not kidding; this happens about three times.)

Hawke does some subtly interesting, smarmy rich guy things with his character — who is unapologetic about the fact that his family is in a better position than most to survive Purge Day — before he eventually falls into action hero mode. Headey, so good on Game of Thrones, is completely squandered in another protective mom role that utilizes almost none of her talents. They’re both upstaged by Rhys Wakefield, channeling Christian Bale’s Patrick Bateman from American Psycho, as the polite leader of the gang of masked killers camped outside the Sandin house. Wakefield’s chilling performance is a hoot, but his presence also marks the moment when The Purge goes from “promising bloody satire” to “poor man’s Straw Dogs or Assault on Precinct 13.” (It’s probably no coincidence DeMonaco wrote the 2005 Precinct 13 remake, also starring Hawke.)

The Purge could’ve stayed on the road to being a razor sharp satire. (There’s a passing reference to Purge parties, and it’s easy to imagine people cranking up their music to drown out the sound of gunfire outside their doors.) The movie could’ve also gone all-in on the shocking mayhem, instead of slavishly aping decades-old horror movies or having its bad guys borrow their masks from the creeps in The Strangers. In other words, the filmmakers played it as safe as the people who barricade themselves in their homes during Purge Day.

Al Madrigal Why Is the Rabbit Crying? Dead Mine