Posted in: The Reel World by Brent Lorentson on August 9th, 2013 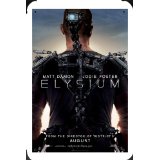 Walking out of District 9 I knew I had just watched something special; it was more than a simple sci-fi film, it was a technical achievement that would make writer/director Neill Blomkamp a guy to look out for.  It’s been four years since District 9’s release and Blomkamp steps up to the plate with an even more ambitious project with Elysium.  For those who have seen the trailers, I’m sure like myself you were chomping at the bit as the visuals gave us hope for a film that would not only equal what District 9 did but surpass it in quality and scope.

In the late 21st century the world becomes overrun with sickness.  The world’s wealthiest and influential come together to create a safe haven from disease.  Elysium is the end result.  A place nestled in space where everything is near perfect, a society without sickness and where citizens can simply lie in a machine and be healed by it no matter how serious the injury or sickness.  It’s these very machines that those back on Earth will do whatever it takes and risk (near) certain death to place their loved ones inside to be healed.

The contrast of these two worlds is beautifully realized, and both equally seem possible realities for what is to come if we continue to evolve as we have.  Make no mistake, though this is heavily touted as a sci-fi/action blockbuster, it is still a film with a message that it wants to hammer into the audience’s minds whether they like it or not.

Max (Matt Damon), is a young man who has survived in the slums of Los Angeles.  Time and sickness have managed to make LA more closely resemble a third world country than the city that it is today.  Though brought up by nuns who have done what they can to help the sick and dying, even at a young age he had a penchant for a life of crime, not that he aspires to be a criminal but simply as a means to survive.  After serving time in prison, Max gets by doing what he can and works at a mechanical plant.

It’s on the way to work where Max is confronted by the “police” (men in uniform no longer are the enforcers of the law; instead there are robots that patrol the streets.) who with excessive force end up injuring him and results in a trip to the hospital.  At the hospital he encounters his childhood friend Frey (Alice Braga, a breakout actress from the Brazilian masterpiece City of God) who is now a nurse at the hospital.  Max wants to reestablish the friendship they once had, trying to reassure her that his life of crime is behind him, but Frey is hesitant considering her life is complicated as she tries to care for her daughter who is dying of leukemia.

Things unfortunately take a turn for the worse after Max suffers an accident at work that exposes him to a lethal dose of radiation and he is given only days to survive.  His body is quickly deteriating, and the only thing that can save him is a ticket to Elysium, and the only man who can help him is Spider (Wagner Moura).  Spider runs an organization that attempts to get illegal passengers onto Elysium, though with all of his attempts he continues to manage success.

It’s Secretary of Defense Delacourt (Jodie Foster) who is in charge of keeping Elysium safe from anyone daring to enter illegally and will use deadly force when necessary.  I was excited to see her step into this role, and my hopes for what she could have done with this role were high, but for me the role simply fell flat.  There was a chance to make this character someone to fear, but instead that role goes to Sharlto Copley (District 9), who plays Krugar, her enforcer back on Earth.  Krugar is ruthless and not afraid to do what it takes to complete the mission, whether it’s to retrieve data from an individual’s head or to kill helpless passengers trying to make it to Elysium to be healed.

As for that exoskeleton Max is geared up with for his journey to Elysium…It’s primitive in this future world, and the surgeons who apply it look more like the types you’d find in a tattoo shop than attaching devices to a nervous system that give the ability for superhuman strength.  So much could have been done with the suit, but once it’s on Max, there is no period of adjustment, the two simply are one.  In the sequence where we see Max put his suit to the test, it is in a one-shot opportunity where they have to take out his former employer, Carlyle (William Fichtner) and obtain his DNA data to gain access to Elysium.  This sequence goes down as one of the high points of the year for me.  It’s methodical, it’s bloody and relentless.  Seeing Max rip through the robot guards then move on to fight Krugar and his gang as they come to Carlye’s rescue…it’s a sequence that is so ambitious and executed so well it got me excited for the possibility of what would follow.

Sadly, though, from here on the film continued on the predictable path that many movies like it have gone before.  Going in I had a feeling how this movie was going to end, and it comes as no surprise when it does come to its conclusion.  That’s not to say it’s not a good movie; it’s still entertaining, and I believe audiences are going to eat this up, but I still can’t help but feel let down.  The effects are stunning and believable, that this technology could possibly be at our fingertips; the film does wonders on making this convincing.

Elysium is a film with a message about the division between the rich and the poor and how the right money and the right influence can keep you alive when the poor have no other choice but to suffer.  But it’s the film’s final act that becomes its undoing.  Does it ruin the film?  No, but it still left me hanging my head as I exited the auditorium.  Sure, people will feel I’m being hard and that I let expectations get in the way, but why shouldn’t I when the trailers seemed to promise so much more?  I still believe Neill Blomkamp is the best thing to happen to science fiction in the past decade, and everything he does in the future I’m sure will continue to excite me for what could be.

Brent Lorentson is a horror writer and film critic based out of Tampa, Florida. With a BA in Digital Film, he co-wrote and co-directed Scavenger Hunt. His short stories have appeared in various horror anthologies. In 2019 his short script Fertile Blood will be a part of the anthology horror film Slumber Party. He is currently working on his first novel A Dark and Secret Place set to be released in late 2019. Favorite Films: Taxi Driver, Fight Club, I Saw the Devil, The Wild Bunch, Dawn of the Dead, A Clockwork Orange, Pulp Fiction, Heathers, The Monster Squad, and High Fidelity.
Strike Back: The Complete Second Season (Blu-ray) Body Double (Blu-Ray)