Posted in: Disc Reviews by Michael Durr on August 10th, 2013 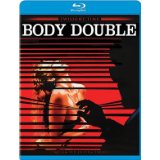 Plenty of movie critics out there like to praise the artsy movies like they are the second coming. We see it all too often. Critically acclaimed, revolutionary, captivating, all over used words to described the latest movie that often is nothing more than a good reason to sleep for two hours. For me, I love a different type of movie, in a generic term, the cult classic. A movie that is so awful, it is often fantastic in its own way. A frequent subsection of this is the campy erotic thriller. One of those films is on the docket today, and that film is the DePalma classic: Body Double.

Let’s cue the scary music! Bring in the fog! As we roll back from the very fake graveyard, we see a rock and roll vampire (played by Craig Wasson) laying in his coffin. As he is about to hit his moment and rise from the grave, he gets an unfortunate case of claustrophobia. Cut! Cut! It appears the actor, Jake Scully is having issues on set. Director Rubin (played by Dennis Franz) wants to know what happened out there and Jake does his best to explain it away. They almost go back for a second shot but not before the graveyard catches on fire thus calling it quits for the day.

Being a struggling actor is rough for Jake but he is usually all smiles regardless of the lack of work in front of him. He comes home with his groceries straight from the Farmer’s market and hears his girlfriend, Carol (played by Barbara Crampton) making those special sounds all men like to hear back in the bedroom. No, not the sound of the vacuum cleaner or the dinner bell, those OTHER sounds. So he decides to sneak up on her, only to find that she’s cheating on him with another man. I think I recognized my pool boy there. No wonder my wife left me.

Anyway, Jake decides to run for the nearest bar and drink away his troubles in a bottle of Jack Daniels. Afterwards, he stays at the Hollywood Tower but unfortunately he cannot sleep. He scans the sheets looking for auditions and while looking meets another struggling actor named Sam Bouchard (played by Gregg Henry). Wait cue the failing audition montage! I am pretty sure somewhere in that montage he was up for the role of Mr. Clean, but he had way too much hair. Jake then decides to go to his weekly acting class where Sam also happens to be.

As Jake and the teacher, Will (played by David Haskell) act out what it is like to be a sardine in a can, Sam watches on quite disgusted. Maybe he wanted to be the sardine? No in fact, he is just disgusted with the whole thing and calls out the teacher for being a fraud. Sam decides to take Jake away from all of this and talk to him mano o mano. Or perhaps he is interested in casting Jake as Charlie the Tuna, we cannot be too sure. At some point in the conversation, Sam asks Jake rather intently if he is good with watering plants.

That leads to Sam convincing Jake to do some house sitting. At the Space Needle, no wait that’s actually the Chemosphere in Los Angeles. All he has to do is stay there until Sam gets back and do a little bit of plant watering. It even has a rotating bed. Oh, and one more thing. It also has a very high powered telescope. That telescope is not just for watching the stars above, it is for watching neighbors below. That is when Sam introduces Jake to one Gloria Revelle (played by Deborah Shelton) who puts on one very special show. But as Jake soon finds out, voyeurism is not always innocent fun.

Honestly, I would be lying if I said the movie at first glance is some Oscar contender. It is clearly not, but in the same breath it can be appreciated more and more on multiple viewings. I have seen the movie about four times now (first time on blu-ray though) and as the layers get exposed of this movie, it makes me love it that much more. Sure, Craig Wasson is basically a bungling idiot through much of this film but the actors and especially actresses around him more than make up for that.

Melanie Griffith and Deborah Shelton are both stunning in looks and how much they bring to each of their characters. Both played their role to a tee, Melanie as a sarcastic porno queen and Deborah as a troubled wife on the verge of a breakdown. Gregg Henry also turns in a decent hand in his two-handed role. Even Dennis Franz was a load of fun in this film despite the fact he was just playing DePalma in his directorial depiction. There is so much to like here in the camp of the film but one has to really unravel the layers to get there.

I would be remiss if I did not mention that this film also has a full scale music video inside of it. That’s right, ever hear of a band called Frankie Goes to Hollywood? Are you familiar with the song, Relax which is probably the most sexual song of the 1980’s? In Body Double we get Frankie and a whole lot of Relax in a scene that can be best described as you have to see it to believe it. I won’t spoil the scene but if you have tapped your foot or sang along to this defining song of the 80’s, you will deeply enjoy these precious minutes contained here.

The video is presented in 1.85:1 widescreen at 1080P. DVD and VHS were not always kind to this movie. I remember my special edition dvd not having the greatest picture. This blu-ray from Twilight Time certainly cranked up the color, cranked up the sharpness and provided fantastic clarity to this fun film. This is a fine job of restoration and it does not look DNR’ed to death either. It is completely natural with grain in the right place and details in the other. This is the way the film should look, now and forever.

The audio is presented in 5.1 English DTS-HD Master Audio. Audio is also right on spot, dialog is strong and the wonderful score by Pino Donaggio takes its rightful center stage. This movie was not really destined for frequent surrounds but the entire film has a good soundstage and it comes out rather well. The film never drops out or goes too high during the heavy music and score scenes. Though, I do have to admit turning up the Frankie Goes to Hollywood bit to eleven. Subtitles are included in English SDH.

As of the writing of this review, Twilight Time’s limited edition pressing of 3000 copies has already sold out. If you go on Amazon, copies are running $90-$100 bucks. (I pre-ordered mine at www.screenarchives.com for the record) There is always the chance that down the road Sony could pick back up the rights and make their own blu-ray, especially considering how well this one sold. That aside, it was great fun to watch this film again and see why this is one of my favorite guilty pleasures. Some would dismiss this movie as smut, but in my opinion it is far more.

The video and audio is top notch as Twilight Time has shown careful attention to detail here. The only new extra is the Isolated Score and the four featurettes come from the older Special Edition DVD. If you can find a copy of this blu-ray at a reasonable price, I highly recommend it. There is enough here to warrant multiple viewings and we might never see another blu-ray pressing of this title. Heck, if you need one more reason to buy this…just think young Melanie Griffith in the nude. Okay, I see the opening of internet browsers now. Enjoy.

Michael Durr has been reviewing movies for the better part of fifteen years now. He primarily enjoys thrillers, sci-fi, animation and even a little courtroom drama. His favorite films include Escape from New York, the Goonies and anything with Alyssa Milano. When he’s not praising Kurt Russell as the greatest actor of our time or scratching his head over a David Lynch flick, he’s spending time at home in Texas with his lovely wife, Lori and his amazing son. How they put up with him is a mystery, but even Basil Rathbone doesn’t have the time to solve that one.
Elysium Killing Season (Blu-Ray)