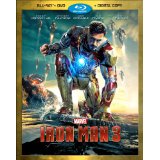 It’s easy to forget how important it was for 2008’s Iron Man to be great. After all, the film was only asked to A) properly introduce a B-list comic hero to the movie-going masses and B) successfully kick off what turned out to be Phase One of Marvel’s March Toward Global Domination Cinematic Universe. “Good” would’ve been a letdown; Iron Man needed to be great. Fortunately, it delivered in spades; its critical and commercial success paved the way for an unprecedented run of films that culminated with The Avengers last summer. With a release date for the Avengers sequel already on the horizon, Tony Stark and Co. have once again been asked to set the tone.

Iron Man 3 takes the bulk of its story from “Extremis”, the influential six-issue comic book arc published in 2005-06 and written by Warren Ellis. (Iron Man’s origins in the first film also borrowed heavily from “Extremis.”) The movie starts with an amusing scene set at the dawn of the new millennium. The New Year’s Eve sequence in Switzerland allows star Robert Downey Jr. to play up Stark’s “genius, billionaire, playboy” persona before he started focusing on the “philanthropist” part, and it gives new director Shane Black an excuse to saddle some of his cast with hilariously bad wigs. (A familiar face from the franchise’s past — and Stark’s future — also pops up.)

When we catch up with him in the present, Stark is an anxiety-ridden “pipin’ hot mess” consumed with building Iron Man suits — we see him tinkering with the Mark 42(!) near the start of the film — because he is haunted by the events of The Avengers. I can’t tell you how much I loved this turn of events. It would’ve been easy (and totally understandable) for Iron Man 3 to jump into its own plot and mostly disregard what happened in the Marvel movie universe last summer. So I was delighted that the film allowed Stark to react to the appearance of aliens and alternate dimensions as if it were a big deal.

“You know who I am. You don’t know where I am, and you’ll never see me coming.”

Tony’s distressed state of mind is putting a strain on his relationship with Pepper Potts (Gwyneth Paltrow), while best friend Rhodey/War Machine (Don Cheadle) is too busy being re-branded as the “Iron Patriot” to provide much comfort. As if Stark didn’t have enough on his plate, he’s got to deal with a brash terrorist known as the Mandarin (Ben Kingsley) and yet another Tony Stark-wannabe in the form of Aldrich Killian (Guy Pearce.) If Sam Rockwell’s Justin Hammer was a goofier, incompetent doppelganger for Stark in Iron Man 2, then Killian — founder of Advanced Idea Mechanics (A.I.M), which developed the game-changing Extremis process — is a sinister version of our hero. One of the Mandarin’s attacks hits someone close to Tony, who vows revenge in a very public, Stark-ian way.

As you can tell, this is somewhat darker stuff than we’re used to from the Marvel movies. Jon Favreau — who sees a boost in his screen time as Stark ally Happy Hogan — displayed a wonderfully light touch as the director of the first two Iron Man films. His movies brought fun to the genre without resorting to camp, and proved a superhero could have substance even if he wasn’t brooding all the time. The films in Phase Two — 2014’s Guardians of the Galaxy, plus sequels to the hugely successful Iron Man, Thor and Captain America — each have directors who are new to the Marvel Cinematic Universe as they lead up to the second Avengers. This tells me the powers that be aren’t interested in merely cloning their past triumphs.

“That all you got? A cheap trick and a cheesy one-liner?”

The way most people seem to remember it, Robert Downey Jr. returned from movie purgatory after he crushed the role of Tony Stark. While Iron Man undoubtedly gave the actor an express ticket back to the A-list, the movie that made Downey a star again after a string of personal problems was actually 2005’s Kiss Kiss Bang Bang, the directorial debut of Shane Black. Black may not be a household name to many moviegoers, but — having written or co-written the original Lethal Weapon, The Last Boy Scout, Last Action Hero and The Long Kiss Goodnight — he’s a rock star for fans of late ‘80s/early-to-mid ‘90s quippy action comedies (as well as fans of the letter “L”, apparently). When he was hired to direct and co-write (with Drew Pearce) Iron Man 3, a part of me worried his sensibility might get buried under the crushing weight of the Marvel machine.

Thankfully, Black’s personality is allowed to shine through the same way Joss Whedon (Buffy, Firefly) brought his ragtag/dysfunctional family of characters mojo to The Avengers. Iron Man 3 is a huge undertaking for a guy who is only directing his second film, but it manages to remain a Shane Black film through and through. It’s set during Christmas (like Lethal Weapon, The Long Kiss Goodnight and Kiss Kiss Bang Bang), there’s a spectacular sequence where our hero’s waterfront home is decimated by helicopters (Lethal Weapon 2) and the house on stilts collapses in a heap (Lethal Weapon 2 again). In fact, the film’s shipyard climax is so reminiscent of the Lethal Weapon 2 finale, I kept expecting Cheadle’s Rhodey to revoke someone’s diplomatic immunity.

The problem is a lot of this stuff may be too inside-baseball for people who aren’t action movie nerds and simply want more of the same from their big summer blockbusters. Tony spends more time out of his various Iron Man suits than ever before, but I don’t think that’s a bad thing when you’ve got a star as witty as Downey. Besides, there’s plenty of action involving the suits — including a thrilling, barrel-of-monkeys aerial rescue and the film’s delirious climax — and their surprising occupants. Iron Man 3 also gives us voiceover narration from Stark for the first time. I found it a bit out of place until it paid off nicely in the funny post-credits sequence. (You know the drill by now with these Marvel movies; stay in the theater until the very end.)

Kingsley has fun playing the Mandarin — a more earthbound villain than the one from the comics; we mostly see him in grainy terrorist videos — as a man who loves putting on a performance. Pearce, slick and formidable after an inauspicious start for his character, is also impressive as Killian. (James Badge Dale also deserves a mention as Savin, Killian’s nasty main henchman.) As Stark investigates the Mandarin’s bombings, he winds up in Rose Hill, TN, where he’s almost as out-of-his-element as he was in the Afghan cave from the original film. He meets an impossibly precocious and handy boy named Harley (Ty Simpkins). The scenes where they bond aren’t nearly as cringe-worthy as they should’ve been thanks to a nice performance from Simpkins and the fact that Downey could probably riff with a hat rack, but I’m still not crazy about the fact that Harley gets roughly as much screen time as Rhodey.

The extras on the Blu-ray include a generous supply of deleted/extended scenes and outtakes. There are three very brief features that include a behind the scenes look, scene deconstruction and a look at the upcoming Thor: The Dark World film. It’s really an extended trailer. You get a gag reel and an audio commentary on top of it all.

There are lots of things about Iron Man 3 that don’t play out the way audiences might expect them to based on the previous films. Some people might find this a bit jarring and even unpleasant, but I think it’s a provocative and exciting direction for the most lucrative property in all of moviedom. Either way, “the whole world’s gonna be watching.”