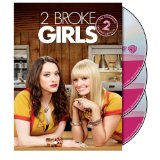 Everyone on TV has nicer clothes and a bigger house than you do. And I’m not just talking about fictional doctors or lawyers. Even small-screen characters with relatively modest incomes manage to live in palatial apartments. Need proof? The 2 Allegedly Broke Girls in CBS’s hit sitcom live in an apartment that is literally big enough to fit a horse. (Hi, Chestnut.) Of course, the show isn’t exactly going for gritty realism. The most important thing here is the terrific comedic chemistry between stars Kat Dennings and Beth Behrs, which continues to carry this uneven show.

Max Black (Dennings) and Caroline Channing (Behrs) are best friends, despite the fact that they appear to be polar opposites. Caroline is blonde, skinny and sweet, while Max is dark haired, busty and sour. (Or, as one character put it during the second season, “That’s your brand…the Double D’s and the Ditz.”) Last season, Caroline (the disgraced daughter of a Ponzi schemer) convinced Max (a talented baker) to start a cupcake business together.

To support that dream, Max and Caroline work at the Williamsburg Diner in Brooklyn with their wacky, warped surrogate family. There’s diminutive diner owner Han (Matthew Moy), who has been the butt of more short jokes than anyone since Carlton Banks. There’s also paternal cashier/lovable ex-drug addict Earl (Garrett Morris) and pervy cook Oleg (Jonathan Kite), who can turn anything into some sort of sexual innuendo. (For example, he’d probably make an “in-your-end-o” joke about my previous sentence.) There’s also larger-than-life diner regular Sophie Kaczynski (Jennifer Coolidge), who consistently shows up to support Max and Caroline’s dreams, snack on some cupcakes or hook up with Oleg.

Season 1 ended with a fortuitous restroom run-in with Martha Stewart, who gave Max and Caroline’s Homemade Cupcakes her seal of approval. The second season follows our broke girls as they attempt to capitalize on that momentum by opening their own cupcake shop. Though I’d stop well short of describing this sitcom as “realistic,” the other best thing about 2 Broke Girls — besides the chemistry between the two leads — is how its characters actually worry about money. The show still keeps a running tally of the Girls’ finances after each episode, and I was pleased to see the season-long arc to launch their business play out in a surprisingly levelheaded way. Put it this way: it doesn’t look like Max and Caroline are going to be quitting their day jobs just yet.

It’s a good thing too, because season 2 saw Max and Caroline spend way too much time out of their hideous, mustard-and-ketchup-colored diner uniforms, which have become one of the show’s trademarks. Another one of the show’s trademarks — the raunchy, groan-worthy punchlines — remain intact. There are jokes about broken hymens, golden showers and public breast feeding…and that’s just in the season premiere!

To be clear, I often roll my eyes at this stuff because it’s corny, not because I find it offensive. Some of the punchlines do stick the comedic landing, but that has more to do with the sheer volume of jokes rather than the quality of the material. Some of my favorite moments of the season came from what seemed like tossed-off lines or throwaway moments. (Like Caroline’s hilariously weird “Guy Voice.”) I think it would be wise for creators Michael Patrick King (Sex and the City) and Whitney Cummings (Whitney) to let the actors continue to explore their own comedic groove rather than having their writers twist themselves into pretzels to telegraph the show’s dirty jokes.

Dennings and Behrs have actually become real-life best friends due to their time working on the show, and you can definitely see it. The two actresses complement each other extremely well. Dennings has grown nicely into Max’s odd combination of aggressive and deadpan humor, while still conveying the character’s insecurities. (Including Max’s refusal to boss around an unpaid intern in Ep. 9/“And the New Boss” out of fear of being disliked.) Meanwhile, Behrs continues to be a gifted physical comedienne, even as Caroline threatens to become grating and endures constant humiliation.

I was also pleased to see Moy’s Han grow a backbone — most notably in Ep. 3/“And the Hold Up” — and snap back at Max’s endless stream of short jokes. (“The only thing you have in common with that guy on Hawaii Five-0 is that you ARE 5-foot-0.”) Coolidge, who joined the show in Ep. 14 of the first season, is now a series regular and is often met with the same uproarious studio audience applause Kramer got on Seinfeld whenever he first entered a room. Obviously, Coolidge isn’t quite that funny, but the actress has an uncanny way of selling ridiculous bits, like Sophie talking about how she fell asleep watching a movie and believed for a year that she was the one who framed Roger Rabbit.

2 Broke Girls works best when it’s somewhat relatable. As a result, the show doesn’t lend itself to big-time guest stars. And when they do pop up — like a painful guest spot from rapper 2 Chainz that was a thinly-veiled plug for the network’s Grammy telecast — it doesn’t work. (Talk show host Piers Morgan fared slightly better as himself in the season’s penultimate episode/“And the Tip Slip.”) Cedric the Entertainer (as Earl’s favorite son) and Andy Dick (as a demented puppeteer) also drop by, while Steven Weber (Wings) is underused as Caroline’s dad. The season’s most effective guest was recurring performer Ryan Hansen. Hansen played “Candy” Andy, a fellow small business owner and a love interest for Caroline; the show was generous enough to give him dialogue that was as funny as Max and Caroline’s instead of making him a bland love interest. This three-disc DVD set includes unaired scenes, a gag reel, and three featurettes, including the show’s panel at PaleyFest 2013.

The up-and-down season surprisingly ended with the most substantial scene in the show’s run. The finale also devised a clever way to keep Max and Caroline’s dreams alive while having them close to the diner. CBS comedy audiences are on the verge of finding out How I Met Your Mother, so it appears 2 Broke Girls will soon become the cornerstone of the network’s vaunted Monday night comedy block. (The show airs at 9 p.m.) Unlike some of its more ambitious, artistic-minded comedy brethren, 2 Broke Girls doesn’t appear to be interested in sitcom greatness. To be honest, I’d happily settle for more consistent sitcom “pretty good-ness.”