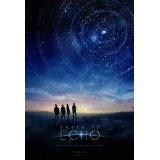 “Missed it by that much.” Never before was that Don Adams/Maxwell Smart catchphrase more appropriate to a movie. Sometimes there is a very thin line between instant classic and near miss. Earth To Echo is the best example in decades of a film that could have, should have, would have been so much more if not for just one bad decision. The film has all of those coming-of-age moments that exist in those 1980’s classics like Goonies, Explorers and, of course, ET. The film sports a wonderful cast with plenty of nuance in characters. There’s a cute alien and that mission that binds friends’ lives together forever even if they never see each other again. It’s a story of catching a magical moment in the waning moments of childhood. And it would have worked, if only director Dave Green hadn’t tried to hedge his bet just a little over the line, reverting to the “found-footage” style of filmmaking. It’s one of those choices that allowed Green to snatch defeat from the hands of victory.

The story is near perfect. A group of friends have been neighbors all of their lives. But a highway is going through their block, and they all have to move now. It’s the very last night they will spend together when something strange happens. Cell phones and other electronic screens begin to “barf” up an odd kind of static. One of the boys discovers that it’s a map of the surrounding desert, and the friends decide that they will use this final night to follow the map and have one last adventure together.

The adventure leads them to a strange alien creature/machine that appears to be broken. They end up going on a scavenger hunt of sorts as the “map” leads them to parts that help the alien become whole. But it’s so much more than that. It’s a key to a spaceship, and the kids aren’t the only ones tracking it. Government agents disguised as road construction guys are also on the trail of this ship, and the guys will have to avoid capture if they’re going to help their alien friend find his way home among the stars.

Yeah, if this all sounds familiar, that’s because it is. But that’s OK. The formula works, and there are enough clever angles here to make it its own thing.

The cast of kids is a good one. They share wonderful chemistry, and I completely bought the camaraderie they shared. It’s a group relationship that transcends an era. You’ll recognize the bond no matter how old you happen to be. It’s obvious that Green shares the references of those 1980’s gems. This scavenger hunt includes plenty of Goonies references and some scenes that could have been lifted directly from ET.

Alex is played by Teo Halm, and is kind of the leader of this group. His home appears to be the center of the disturbance, and it’s his passion that brings the group together for the adventure. Tuck, played by Astro, is the “cool” kid in the group. He plays a little at being “street”, but we’re not talking thug here. It’s a cute version of street. He brags a bit, and his stories involving the girl Emma, played by Ella Wahlestedt, end up backfiring when she becomes an accidental part of the team. Munch is the “fat” kid with a heart of gold that all of these films have. He’s played by Reese Hartwig and provides the charming laughs throughout. The government bad guys are represented by Monk’s Jason Gray-Stanford. Their encounters with this character lead to much of the film’s tension. Then there’s Echo, the creature that looks like Bobo from the original Clash Of The Titans. It’s all a winning combination until Green outsmarts himself and loses half of his audience with the “found footage” style. The cast does a great job, and it’s a crime that their effort is constantly undermined by the shooting style.

First of all, this isn’t even good found footage. We’re going back to the nausea days of Blair Witch with this one. Naturally, it’s filmed by kids, so it would be badly filmed. Unfortunately, it means that the style distracts from all of that charm and chemistry to the point of completely removing you from the emotional attachment that a film like this absolutely requires. Add jumbled images because Echo is messing with their equipment, and you end up with a production design that is almost unwatchable.

The second problem deals with the target audience. In the preview screening I attended there were plenty of children. I’ve never seen a more restless child audience. Green severely underestimates their patience and ability to roll with the unfriendly images. Kids were taken out by parents because they just couldn’t quietly watch this entire film. There’s a reason why this style hasn’t been used on a grand scale for a kids’ film. It’s hard enough to keep kids engaged, and this film fails miserably at keeping them in the story. You can have all the cute effects you want. You can have wonderful kid actors and charm, but this film squanders all of it on a concept lost to his target audience. Explain to your kids that he was just being stylish. Green missed out on a wonderful marketing gimmick. In the 70’s they were giving barf bags out at horror films like The Exorcist. Earth To Echo would have been the perfect film to bring back that golden oldie marketing technique.

If I sound angry, it’s because I am. The found-footage angle was so unnecessary. Green had all of the elements of a great film. If only he had had the confidence to let these actors tell this magical story. I really believe it would have been one of those films today’s kids would still be talking fondly about in 30 years. Green, you missed it by that much. The wasted resources here are enough to make you cry.

Sure, there are wonderful f/x here. It might be a little too derivative of Transformers. Echo gathers these pieces in a Transformer-like assemblage, and many of the sound effects also sound as if they could have come from that franchise. It doesn’t help that the big spaceship payoff scene looks exactly like a Transformers bit. Still, all of that would have been easily forgiven. There was magic here, and it was all discarded for the cheapest trick in the box.

There is an end credit scene, so you might want to stick around. This one took everyone by surprise at the screening, and Brent and I were the only ones still there to see it. I’m a notorious credit-watcher anyway.

The best thing that could happen here is for someone else to take note of the missed opportunity. If someone like Joe Dante looks at this film and understands what it almost was, there’s hope that we might get that special film again someday soon. The formula still works, and it transcends time. We’re overdue for that coming of age/buddy classic film. An entire generation is waiting. Let’s hope someone out there is listening. Obviously Dave Green doesn’t get it. But someone will. Joe Dante is an Upcomingdiscs fan. Are you out there, Joe? “We need your help.”

Gino Sassani is a member of the Southeastern Film Critic's Association (SEFCA). He is a film and television critic based in Tampa, Florida. He's also the Senior Editor here at Upcomingdiscs. Gino started reviewing films in the early 1990's as a segment of his local television show Focus. He's an award-winning recording artist for Omega Records. Gino is currently working on his 8th album Merchants & Mercenaries. Gino took over Upcomingdiscs Dec 1, 2008. He works out of a home theater he calls The Reel World. Favorite films: The Godfather, The Godfather Part II, The Body Snatcher (Val Lewton film with Karloff and Lugosi, not the pod people film), Unforgiven, Gladiator, The Lion King, Jaws, Son Of Frankenstein, The Good, The Bad And The Ugly, and Monsters, Inc.
Begin Again Sinbad: Make Me Wanna Holla