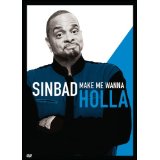 For a good portion of his latest stand-up special, Sinbad playfully berates a 15-year-old audience member named Cory. It’s mostly standard-issue, old man, “back in my day” ribbing. But the most incisive observation comes when Sinbad points out that Cory would probably much rather be in the audience for a Kevin Hart show. The feeling that Sinbad is no longer the hot comic of the moment — and hasn’t been for a while — informs much of this inoffensive, baby boomer-friendly set.

“I could’ve made a billion dollars just being a dirty comic, man.”

Sinbad is now 57 years old. The comedian is also close to 20 years removed from a mid-1990s run — 1995’s Houseguest, along with 1996’s First Kid and Jingle All the Way — that saw him come as close to becoming a movie star as he would ever get. In the two ensuing decades, audience sensibilities about what’s funny have shifted too many times to count. Given that Sinbad was never considered to be a cutting-edge comic, it’s not surprising to find that his shtick remains virtually unchanged. In fact, Sinbad’s throwback material seems like a more natural fit now that he’s actually old enough to be credibly called “old school.”

Make Me Wanna Holla was taped in Detroit and marked a return to Sinbad’s home state. (The comedian was born in Benton Harbor, Mich., and the show is dedicated to his late father, Donald Beckley Adkins.) So it wasn’t surprising to hear a fair amount of material centered around the region’s economic hardships. Sinbad’s comedy has consistently blended observational humor with race relations, so his take on “Stand Your Ground” or the Paula Deen and Riley Cooper controversies wasn’t as incendiary (or exciting) as it might’ve been in the hands of another comic. To be fair, Sinbad’s non-controversial take on these subjects seemed to delight his fans in the live audience. But I wonder: what’s the point of bringing them up if you’re not really going to say anything interesting?

Sinbad similarly brings very little that’s innovative or earth-shattering to well-worn topics, including teachers dating students (“Where were these teachers when I was in school?!”), the way reality TV celebrates the craziest personalities (feels like he’s about a decade too late on this one) and “men and women sure are different” jokes. Make Me Wanna Holla opens with a fairly painful skit where Sinbad (as himself) argues with his musician alter ego “Memphis Red”, who proceeds to take the stage for an overlong song. The 90-minute show closes with another extended musical number that doubles as riff on the differences between non-denominational churches and “black churches.”

The reason any of this is remotely entertaining comes down to Sinbad’s antic, conversational style that really does seem like he’s having a spirited chat with his audience. (The ones watching him live, as well as those of us watching at home.) It worked much better during his stand-up routine than it did throughout the musical interludes. Sinbad’s constant interjections during the songs were more irritating than entertaining. It made me wonder why he decided to open and close the show with music given that his own musical chops appear to be pretty limited.

Of course, Sinbad has forgotten more about what it takes to please and entertain large crowds than I’ll ever know. At this point in his career, the comedian comes off like that loud, genial uncle who rants about the same stuff over and over again and always seems to trap you into a conversation at a family function. You’ve heard his shtick before, some of it might even a little funny, but it’s not offensive enough to cut him off right away.

Earth To Echo No Vacancy