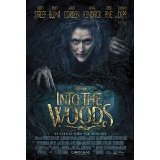 It took a while for Hollywood to finally venture Into the Woods. On one hand, the delay isn’t surprising given that the popularity of live-action musicals at the box office has ebbed and flowed many times since Woods made its Broadway debut in 1987. Then again, the story’s free-wheeling mash-up of Grimms’ fairy tale characters fits perfectly with the current obsession with shared cinematic universes. As a result, Disney — which has a storied past with fairy tales, and a lucrative present with cross-platforming popular characters — seems like the perfect landing spot for an Into the Woods movie.

“Be careful what you wish for.”

Of course, anyone who’s seen Into the Woods knows it’s much more than a whimsical, musical forebear to ABC’s Once Upon a Time. (Which is also owned by Disney, naturally.) It’s the story of a familiar fair maiden named Cinderella (Anna Kendrick), a down-on-his luck boy named Jack (Daniel Huttlestone) who acquires a handful of magic beans, and their encounters with Sincere Charming Princes (Chris Pine, Billy Magnussen), Little Red Riding Hood (Lilla Crawford) and her ravenous Wolf (Johnny Depp), Rapunzel (Mackenzie Mauzy), and others.

Their paths intersect thanks in large part to the efforts of a childless Baker (James Corden) and his Wife (Emily Blunt). To reverse a curse placed on his family tree by a vengeful Witch (Meryl Streep), the Baker — begrudgingly joined by his Wife — marches into the woods to retrieve the ingredients needed for a magical potion: “the cow as white as milk, the cape as red as blood, the hair as yellow as corn, and the slipper as pure as gold.”

On stage, Into the Woods boasted music and lyrics by Stephen Sondheim and a book by frequent collaborator James Lapine. Both men were also involved with shepherding Woods onto the big screen: Lapine wrote the screenplay, and Sondheim wrote a new song for Streep. (Which was subsequently cut.) Even with the musical’s creative godfathers on board, some alterations were inevitable. Earlier this year, Sondheim incited panic among theater geeks throughout the land when he discussed some stage-to-screen changes that didn’t end up being that big of a deal after all. The biggest changes are the absence of the stage show’s visible narrator, and a somewhat lower body count.

The director here is Rob Marshall, who razzle-dazzled with his Chicago directorial debut before helming another Broadway adaptation (Nine) and making his own transition to the Mouse House (Pirates of the Caribbean: On Stranger Tides). Marshall is a theater director by trade, and he did little to hide the source material’s stage origins with his work on Chicago and Nine. In fact, he went the other way and aggressively incorporated theatrical elements into each of his two previous musical adaptations.

Into the Woods presented a somewhat trickier challenge. Even with a relatively modest $50 million budget — “modest” by blockbuster standards, at least — this is still a lavish, Disney production with big stars debuting on one of the year’s most visible movie-going days. In other words, the pressure was on Marshall to deliver a spectacle that could enchant audiences of all ages. For the most part, he does just that by hitting the musical’s funny, irreverent sweet spot. One of my favorite numbers is the intentionally over-the-top “Agony” in which Pine and Magnussen (both channeling the world’s cheesiest power balladeer) hilariously compete to see which clown prince is more conceited.

Marshall does manage to work a bit of stagecraft into the movie to go along with the comically destructive hurricane of witchcraft Streep’s Witch leaves behind whenever she exits a scene. The original production of Woods was cleverly staged but intentionally shabby. The movie is obviously loaded with special effects, but there’s an appealing lo-fi quality to the presentation. For example, Depp’s Wolf makeup looks only slightly more complex than what you’d get at a state fair face-painting station, and the scenes in the “woods” don’t ever totally look like they were shot anywhere other than a studio. (Filming took place in London’s famous Shepperton Studios.)

The director even shows some restraint in presenting the movie’s biggest (literally) character. A vengeful giantess (Frances de la Tour) terrorizes the characters for much of the film’s final act. She’s never seen in the stage show; the movie offers glimpses, but mostly uses the same tactic as the play of having its actors gather close together and yell at the sky.

That somber final act is really where Into the Woods falters. The movie clocks in at 124 minutes, which feels slightly bloated but is still about 30 minutes shorter than the stage show. Woods partly feels overlong here because the point at which most movies roll credits — the “happy ending” — comes at the 75-minute mark. I think the show will always feel drawn-out to me for that reason, but the movie is missing a deeper exploration of the story’s melancholy themes. Instead of delving into what happens when each of these characters — and people in general — get everything they wished for, the conflict is mostly condensed into the Baker’s anxiety about being a father. So instead of having complacency and emotional unrest as the biggest threats to the character’s happiness, the movie more clearly (and less subtly) shifts that burden over to the giantess.

It’s a bit disappointing, but not nearly enough to undo all the good work Marshall and his cast deliver in this film. The director has favored more frenetic cutting in his previous big-screen musicals, but here the camera glides along and calmly captures the rapid dexterity of Sondheim’s trickier songs, like the bickering “Your Fault” and “The Witch’s Rap.” Streep appears to relish every last bit of her screen time — and shows off an impressive belting voice that wasn’t in her Mamma Mia repertoire — as the lonely, possessive Witch who has a penchant for popping up out of nowhere. It wouldn’t be surprising at all to see the actress pick up her 32nd Oscar nomination. (I know it’s not quite that high, but I’m pretty sure we’ve all lost count by now.)

I was also impressed by Blunt, who has really shown tremendous range this year by going from playing a total badass in Edge of Tomorrow to the plucky heroine in Woods. (The role won Joanna Gleason a Tony on Broadway.)  Corden — the Brit whose profile will soon be raised in the U.S. when he takes over for Craig Ferguson on The Late Late Show — is an appealing match for Blunt as the harmless, hapless Baker. Kendrick doesn’t have much to play beyond Cinderella’s indecisiveness. It doesn’t really matter because Pine mostly swipes all of their scenes together; he’s better at playing buffoons — think of the parts in Star Trek where his Jim Kirk is most full of himself — than straight-up good guys. Both lesser-known performers in prominent parts (Crawford’s gluttonous Red Riding Hood; Huttlestone’s trusting Jack) and better-known performers in smaller roles (Christine Baranski as Cinderella’s Wicked Stepmother; Tracey Ullman as Jack’s Mother) find moments to shine. Meanwhile, Depp’s performance amounts to little more than an amusing, extended cameo.

I wouldn’t put Into the Woods alongside the great movie musicals of all time, but it’s certainly one of the better offerings in recent years and the superior option this holiday season. (*Ahem*) So, by all means…“go to the wood!”