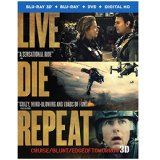 It started when a meteor hit Germany some years before. Suddenly Earth was under attack from a horde of tentacled aliens bent on mankind’s extermination. They’re called mimics for reasons I never quite caught. The war hasn’t been going so well. Television propaganda attempts to make things look better than they really are, and the united Earth forces are about to launch their final thrust offensive. It’s called Operation: Downfall, and it’s D-Day for Earth’s chances. It is no accident that the film releases in America on the 70th anniversary of the real D-Day.

It’s been a long time since I’ve felt I could say this, but credit Tom Cruise with one of the best performances of his career. It’s not so much his action work but the transformation of the character that makes or breaks this film. The supporting cast with the exception of Emily Blunt are really only background noise. The focus is on Cruise and his many resets. But the fine accomplishment here is that he takes Cage from the cocky coward to a man willing to lay down his life to save the human race, and eventually without hesitation. Honestly, the beautiful part is that you don’t even know that it’s happening. Director Doug Liman uses the resets to perform some sleight of hand. These resets can be humorous and even annoying at times, but all the while, just beneath the surface in subtle ways you don’t even notice at first, Cage is evolving into someone else completely. Cruise handles the transformation with a subtlety I haven’t seen from the actor before.

The action sequences and battle scenes are some of the best that modern f/x can provide. This is Saving Private Ryan intensity here. These are the most realistic futuristic battle scenes I’ve ever seen. I’m not in love with the alien design at all. We’ve seen this kind of creature too much of late. It’s easily forgiven, because the environments and action will keep you immersed in the film at all times.

Edge Of Tomorrow is presented in its original aspect ratio of 2.39:1. The high-definition 3D image is arrived at using the standard duel MVC codec at an average 20/12 mbps. The 3D elements are as natural as they get. No fancy gimmick provided here. It’s all part of a larger landscape that pulls you in deeper with each passing frame. (Can I use that term any more, I wonder?) This feels like D-Day, and it feels like the turning point of a global war. The battle scenes are pretty much devoid of color. In fact that describes most of the film. It’s a gritty world where brightness would appear terribly out of place. Much of this film is practical effects with a seamless blend into the computer-generated images of the aliens and landscape extensions. Detail allows for great texture. You actually can feel this dirty world. It gets in your shoes and on your floors. Black levels deliver deep inky blacks that provide wonderful shadow definition.

The DTS-HD Master Audio 7.1 is another wall-shaker. Your sub will dominate these battle scenes. Tons of credit go to the sound production folks who deliver such pulse-pounding sound without sacrificing dialog and other subtle sounds that combine to form quite an intense atmosphere here. The battles will remind you of Saving Private Ryan. Weapons fire, ping and explode all over the sound field. The aliens themselves actually sound better than they look. It’s a subtle slither and rubbing sound along with just an almost inaudible screech.

Operation Downfall – Alternate Cut: (2:54) Nothing interesting here, just an alternate version of some of the beach battles.

Storming The Beach: (8:59) Cast and crew take us behind the scenes for the beach invasion. We get a look at concept art, pre-production meetings and working in the incredible mud.

Weapons Of The Future: (8:55) Of course we’re talking about the suits. They weighed 80 pounds, and the actors had to go through a lot of training to be able to move smoothly in them. We get to see them from the design phase through building them.

Creatures Not Of This World: (5:38) The focus here is on the f/x of the aliens. Plenty of conceptual art and pre-viz work to be shared here.

On The Edge With Doug Liman: (42:36) This is the meat of the behind-the-scenes stuff. There’s a lot of fly-on-the-wall stuff, and it’s absent a lot of the hype that drives me crazy on these features. This is raw production footage that actually shows you things. They talk candidly about shooting with a script that was never locked down.

Deleted Scenes: (7:55) There are eight with no individual play option. Some include pre-viz material.

Gino Sassani is a member of the Southeastern Film Critic's Association (SEFCA). He is a film and television critic based in Tampa, Florida. He's also the Senior Editor here at Upcomingdiscs. Gino started reviewing films in the early 1990's as a segment of his local television show Focus. He's an award-winning recording artist for Omega Records. Gino is currently working on his 8th album Merchants & Mercenaries. Gino took over Upcomingdiscs Dec 1, 2008. He works out of a home theater he calls The Reel World. Favorite films: The Godfather, The Godfather Part II, The Body Snatcher (Val Lewton film with Karloff and Lugosi, not the pod people film), Unforgiven, Gladiator, The Lion King, Jaws, Son Of Frankenstein, The Good, The Bad And The Ugly, and Monsters, Inc.
Transformers: Age of Extinction (Blu-ray) “31 Nights Of Terror” Werewolf Rising