Posted in: The Reel World by Gino Sassani on April 7th, 2015 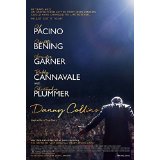 “The following is kind of based on a true story, a little bit.”

In 2005 British folk singer/songwriter Steve Tilston found out something amazing had happened to him but he never knew it. John Lennon had written a letter to him in 1971 providing him with some career encouragement and his home phone number. It was after an interview with the musician in ZigZag Magazine revealed that Lennon was one of Tilston’s idols that got the attention of the former Beatle. Of course, Lennon didn’t know how to reach the musician, so he sent it to the offices of the magazine where it was intercepted by someone who saw some value in the letter and sold it instead of passing it along. It sounds like one of those stories that’s just too wild to be true. The event provides the inspiration for the latest Al Pacino film Danny Collins.

“What do you think of that, Danny Collins?”

Danny Collins (Pacino) has had an incredible 40+ year career as a rock legend. He’s ridden the familiar path of drugs, booze and sex. It’s led him to a place where he takes the stage to find women in their 70’s moving to the beats of his hit Hey Baby Doll. Tonight things are going to change. It’s his birthday and his friend and manager Frank (Plummer) has a special gift for him. He presents a letter John Lennon wrote to him 40 years earlier that he never got. The letter offered him advice on how to remain true to his art and a standing offer to get together. The letter closed with Lennon’s home phone number. The letter leaves Danny to start looking at his pitiful life and ask the tremendous question of “What if” he had gotten the letter back in the 70’s. He cancels the remaining tour, leaves his young fiancé with her “busywork” and travels across the country to look up his son.

He first meets Samantha (Garner), his daughter-in-law and their precious young daughter Hope (Eisenberg). While they might be delighted to meet him, the sentiment isn’t shared by his estranged son Tom (Cannavale). He’s also staying in a local Hilton where he attempts to woo the reluctant hotel manager Mary Sinclair (Bening). He hasn’t written a song in 30 years and wants to write something from the heart instead of the candy pop he’s known for. Of course, he finds that none of these tasks will be simple or easy.

The letter is the only aspect of the film that really happened. The character of Danny Collins and his life are not at all connected to Tiston’s. Tilston was a moderate success with many albums but no real hits to speak of. Of course, these connections are what create the human part of the story. The letter is a clever start, but it takes us nowhere if we can’t see it have some impact on Danny’s life. And that’s exactly the motivation Al Pacino was looking for in taking the part. He’s allowed to move through these attempts to change his life and give us all something compelling to watch.

When I first heard that Pacino was playing a washed-up rocker, I was more than a little worried. As Danny Collins opens, those worries appeared to be justified. Pacino looks quite awkward as Collins on a rock stage. It’s actually almost painful to watch. If this had been the focus of the film, we can be pretty sure it would have been a complete disaster. Fortunately, writer/director Dan Fogelman is smart enough to quickly pull us back from those kinds of scenes. This movie is completely about what happens next. Now Pacino has the kind of material that he just eats up. If there is one thing he can do well it’s the character study, and ultimately, that’s what Danny Collins is all about. You’re going to love the 1970’s album covers using young Al Pacino shots. It’s all making me feel as old as Danny feels.

The cast is solid. Jennifer Garner has stated it’s time to get her career back on track after being a mom and supporting the needs of husband Ben “I’m Batman” Affleck. This is a pretty good start. She isn’t quite the focus of the material, but she injects more than a little heart into the movie. Bobby Cannavale doesn’t appear to be the first choice for a part like this, but he gives a powerful performance that evolves throughout. He puts together some solid moments with Pacino. Annette Bening is terribly underused here, and I’m disappointed that we really don’t get to see that relationship develop. It’s used too much as a device and abandoned altogether by the time the film comes to an end. Christopher Plummer gets some of the more delicious scenes as Danny’s friend and manager, depending on which hat he’s wearing.

Finally, I can’t say enough about young actress Giselle Eisenberg, who steals every second she’s in this movie. She’s bright and has incredible screen presence for an actress so young. She’s playing a girl who gets a bit too excited, and she nailed it perfectly. This little girl is going places, and I can’t wait to see her again.

Fogelman does a great job of building emotional beats in the film. There’s a generous use of Lennon songs that quite literally burst with emotion. The movie’s as much a tribute and love letter to John Lennon, and it does it in the most subtle ways. Sure, there are some holes that needed repair here. All in all, it’s a rather sweet film with some pretty moving moments. “It just turns me on.”

Gino Sassani is a member of the Southeastern Film Critic's Association (SEFCA). He is a film and television critic based in Tampa, Florida. He's also the Senior Editor here at Upcomingdiscs. Gino started reviewing films in the early 1990's as a segment of his local television show Focus. He's an award-winning recording artist for Omega Records. Gino is currently working on his 8th album Merchants & Mercenaries. Gino took over Upcomingdiscs Dec 1, 2008. He works out of a home theater he calls The Reel World. Favorite films: The Godfather, The Godfather Part II, The Body Snatcher (Val Lewton film with Karloff and Lugosi, not the pod people film), Unforgiven, Gladiator, The Lion King, Jaws, Son Of Frankenstein, The Good, The Bad And The Ugly, and Monsters, Inc.
An Act of War Fantail