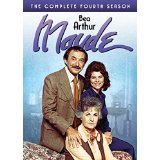 Long before she was a Golden Girl, Bea Arthur was Maude. Maude Findlay had been widowed and divorced over the years. She had a daughter by one of those previous marriages named Carol, played by Adrienne Barbeau. Carol had a son Phillip (Morrison). Carol was also divorced, and she and Phillip lived with Maude and her current husband Walter, played by Bill Macy. Their best friends and neighbors were Dr. Arthur Harmon (Bain) and Vivian, played by future fellow Golden Girl Rue McClanahan. These two eventually got together in this second season and became a couple. They owned an appliance store that Walter ran. For all of her women’s lib talk, Maude was mostly a housewife. There are episodes that find her wanting more, of course. The housework wasn’t really an issue, because they had a maid named Florida Evans. If that name sounds at all familiar, it should. This was to be her last season on Maude, because she would start keepin’ her head above water in the spinoff Good Times. Her husband would make an appearance, this time played by John Amos, who played him in Good Times; however, his name is Henry here but would be changed to James on the new show.

The season would begin with a foreshadowing of Maude’s final season where she would get into politics. The Split has her courted for the New York State Senate. Of course Walter doesn’t like it and gives Maude an ultimatum. Things don’t get any better, and it starts to look like the couple’s marriage is on the skids. In Consenting Adults, Walter moves out and appears to be having a swinging good time, and the idea of divorce comes up. Rumpus In The Rumpus Room continues the story when Maude thinks Walter has a sleeping partner, but it’s really not what she thinks. Walter also falls off the wagon. It’s a pretty serious opening group of episodes to start the season. The Analyst has Maude confronting turning 50. It’s Walter’s birthday in Walter’s Stigma. His party turns interesting when he matches the description of a flasher and has an alibi he doesn’t want to use. Henry Fonda guest starts as himself in Maude’s Mood. Her friends and family worry about her state of mind when she becomes obsessed with running Henry Fonda as president, against the iconic actor’s wishes. This is a two-part episode that again covers some serious issues in a humorous way. In Maude’s Ex-Convict Maude hires a temp housekeeper while Mrs. Naugatuck vacations in England. However, she’s proud of the liberal gesture until she finds out he was in prison for killing his previous employers.

Gino Sassani is a member of the Southeastern Film Critic's Association (SEFCA). He is a film and television critic based in Tampa, Florida. He's also the Senior Editor here at Upcomingdiscs. Gino started reviewing films in the early 1990's as a segment of his local television show Focus. He's an award-winning recording artist for Omega Records. Gino is currently working on his 8th album Merchants & Mercenaries. Gino took over Upcomingdiscs Dec 1, 2008. He works out of a home theater he calls The Reel World. Favorite films: The Godfather, The Godfather Part II, The Body Snatcher (Val Lewton film with Karloff and Lugosi, not the pod people film), Unforgiven, Gladiator, The Lion King, Jaws, Son Of Frankenstein, The Good, The Bad And The Ugly, and Monsters, Inc.
Steve Jobs: The Man in the Machine (Blu-ray) Turn: Washington’s Spies Season 2