Steve Jobs: The Man in the Machine (Blu-ray) 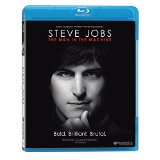 “How much of an a–hole do you have to be to be successful?”

Over the last couple of years, a grand total of three movies — 2013’s Jobs, along with 2015’s Steve Jobs and now Steve Jobs: The Man in the Machine — have applied that very question to Apple’s late co-founder. Each film has approached the issue from different angles, but this Alex Gibney documentary is easily the most comprehensive, even if it’s not the exactly the most entertaining or satisfying.

Like the Aaron Sorkin/Danny Boyle version, Gibney seems to have little interest in telling a traditional cradle-to-grave account of Jobs’ life. The Man in the Machine actually begins in the “grave” by showing us the tremendous outpouring of grief and affection following Jobs’ death in 2011. That passionate reaction is actually what inspired Gibney — the Oscar-winning documentarian behind Taxi to the Dark Side and Enron: The Smartest Guys in the Room — to make this film, which makes for a nice companion piece to his Scientology-takedown Going Clear.

Both films were released last year and pretty openly painted their subjects in an unflattering light. In Going Clear, Gibney kept more of a distance between himself and Scientology, letting the more outlandish and unbelievable parts of the pseudo-religion speak for themselves. In contrast, Gibney narrates The Man in the Machine and even refers to the film as a “mystery story.” The documentary essentially consists of Gibney slowly building a case that Jobs simply wasn’t a very nice person.

The movie covers everything from Jobs’ upstart days in the late 1970s to his nasty breakup with Apple in the mid-‘80s. It continues through his triumphant return to the company a decade later followed by the tech giant’s 21st century prosperity. Some of the material has been well covered by the recent biopics, including Jobs’ fierce denial that he fathered a daughter named Lisa with Chrisann Brennan. That segment of the film is pretty good microcosm for the things Man in the Machine does right and wrong.

On one hand, hearing from the real-life Brennan makes Jobs’ response to her pregnancy feel even crueler and more callous. On the other hand, Gibney leads into the whole segment via an extended anecdote from Kobun Chino Otagwa, a Zen priest who served as a spiritual advisor to Jobs. In its zeal to build the argument that Jobs wasn’t such a nice guy after all, the movie — which clocks in at 128 minutes — routinely takes this sort of digression.

This is especially true in the last act of the film, which travels to China to examine the suicides at the Foxconn factories that manufactured iPhones (and saw a rash of suicides) and chronicles Apple’s questionable backdating of stock options. Gibney wants to show the hypocrisy of these shady corporate practices when they’re coupled with the hippy-dippy, counterculture image cultivated by Apple. It’s a good point, but the director returns to that well a little too often.

To be fair, The Man in the Machine also goes out of its way to show that Jobs was more than a heartless huckster. There’s an overriding sense that Jobs truly believed in his “technology as artform” philosophy, and his maniacal drive to emphasize the “personal” in personal computers was genuine. (That “maniacal drive” to destroy his enemies, by the way, is a lot less endearing once Jobs has reached the mountaintop versus his early days as an up and comer.) Gibney’s greatest coup is the extensive amount of footage of Jobs himself he was able to acquire, which has been assembled into a multi-faceted portrait of the man. He also scored impactful interviews with everyone from Bob Belleville (Apple’s director of engineering during the mid-1980s seems equally traumatized and in awe of his time with Jobs) and Gizmodo editor Jason Chen (who felt the brunt of Jobs’/Apple’s bullying wrath after his website got its hands on an iPhone 4 and reviewed it prior to its release).

Nolan Bushnell, Atari’s founder, tells a story about Jobs and his future Apple co-founder Steve Wozniak doing $7,000 worth of work for the company…except that Jobs told Woz it was only $700 so he could write his “friend” a $350 check. By the time we hear stories about Jobs parking in handicap spaces and driving solo in the carpool lane, we kinda get the point.

Unfortunately, Gibney doesn’t really get any closer to understanding the intense emotion after Jobs’ death. In the end, The Man in the Machine successfully (and thoroughly) confirms Jobs’ jerkiness…which isn’t exactly news by now.

Steve Jobs: The Man in the Machine is presented in an aspect ratio of 1.78:1, although a decent chunk of the archival footage is presented in its native full screen 1.33:1 aspect ratio. The 1080p image is arrived at with an AVC MPEG-4 codec at an average of 35 mbps. Obviously, a lot of that archival footage varies in quality since it shows Jobs from the late ‘70s all the way up to his death. Those segments are presented faithfully, warts and all. (It would be weird if the heavy grain weren’t there.) The newer talking-head segments feature strong clarity and warm tones. Still, the most gorgeous parts of this visual presentation come courtesy of the colorful and earthy Japanese temples, which Gibney revisits quite often.

The DTS-HD Master Audio 5.1 track is, like most documentaries, driven by dialogue from interviews and archival footage. (Those older clips sound appropriately aged but are always intelligible.) Although it’s a low-key presentation most of the time, the track gives a nice full-bodied boost to soundtrack cuts like “Mr. Tambourine Man” by  Bob Dylan (Jobs was famously a big fan) and “She’s a Rainbow” by The Rolling Stones.

Deleted Scenes: (31:13) There are 11 chapters, and they include a longer look at the Cult of Apple during the iPhone 5s launch and Michael Hawley (who worked with Jobs during the NeXT days) recalling the day Jobs died. There’s not a lot of footage of Jobs himself here. And since the theatrical cut is already a bit bloated, these deleted scenes feel somewhat superfluous.

Interview with director Alex Gibney: (9:55) The director offers some solid insights here, including the fact that he borrowed the structure of his film from Citizen Kane. But since Gibney also narrates Man in the Machine, a lot of the stuff he says here — the filmmaker was mystified by the passionate reaction to Jobs’ death — is repeated from the documentary.

Timing was not on Alex Gibney’s side. The Man in the Machine isn’t nearly as revelatory — and simply doesn’t have the same impact — as it would had it not been preceded by two other Steve Jobs movies in as many years.

That being said, this documentary is still worth a look just for the wide range of rare Jobs footage (especially the earlier stuff).