Friday the 13th: The Series – The Complete Series

Posted in: No Huddle by Gino Sassani on September 8th, 2016 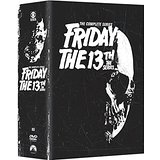 If you come to this DVD set in the hopes of discovering something to do with Jason or even his machete-wielding mama, you will be very disappointed. There is no Camp Crystal Lake, and no one’s wearing a hockey mask. The fact is that this series, syndicated from Canada, had absolutely nothing to do with the film franchise. They have no characters in common. They have no connection to the stories in the film franchise. Basically the name is the only thing they share. CBS has finally put together the entire series in one release.

It all starts with antique dealer Uncle Lewis. He made a deal with the devil to help His Evilness to distribute cursed and evil objects through his store. Objects included Jack the Ripper’s scalpel. Finally Satan comes to collect Uncle Lewis and his tattered soul, leaving his niece Micki (Robey) to clean up the mess. She and cousin Ryan (Le May) have the unenviable task of tracking down these items and sealing them safely away so they can do no more harm. They were often assisted in their task by Jack (Wiggins), who knew something of the occult. The series ran from 1987 to 1990 and never made more than a ripple in the ratings.

In Season 2 we pretty much pick up where the previous season left off. Uncle Lewis might have been defeated and killed, but Lewis had enchanted a mirror before he died, allowing him to open a portal to Hell and escape. So it’s back to tracking down the artifacts and getting them all returned. Artifacts this season included a voodoo mask, antique radio, violin bow, makeup case, handkerchief, pocket watch, World Series ring, pendant, snow globe, and snowshoes.

The final season of this bizarre series begins with a two part European jaunt episode as Jack ends up in France searching for none other than Satan’s copy of the Bible. Other artifacts in the final year include: a cursed wheelchair, a hearing aid that allows the user to hear other people’s thoughts, a coin that can bring back the dead, a car radio that does double duty as a time machine (must have come from a Delorean), a cross that burns vampires alive, a film reel that can bring the movie’s femme fatale to life, a pen that turns a writer into one of his serial killer characters, an embalmer’s tool that trades one life for another, a necklace that allows one to switch bodies with someone else, and a dog leash that lets its owner merge his dog and wife into a single creature. The series ends with Micki going through a time portal and face to face with the Marquis de Sade. And that’s all, folks. Series over.

I remember when this show first turned up on a local Tampa station. Like many folks I was sucked into the name scam and watched an episode. I wasn’t impressed then. I’m not impressed now. There are a few OK stories, and the idea is clever enough, but the two leads are absolutely horrid actors. It wasn’t alone in its attempt to cash in on the slasher trend. There was also a Nightmare on Elm Street series, but at least that had Freddy as a host. Truth be told, it is one heck of a surprise that this thing went three years. It took a ton of retooling and moving things around. Anyone could see it was hanging by a thread from the very beginning. Such is the advantage of being a first-run syndication series. There isn’t just one person or group making the decision. So long as you can find stations to cover the costs, you have a shot at staying on the air. Except that first-run syndication has all but vanished today. In 2016 this show wouldn’t have even gotten past a cheap pilot. And now you’ve got a complete set of the DVD’s. The series had its good times as well as lows. The problem, of course, was that it could “never be free of that damned movie”.

Gino Sassani is a member of the Southeastern Film Critic's Association (SEFCA). He is a film and television critic based in Tampa, Florida. He's also the Senior Editor here at Upcomingdiscs. Gino started reviewing films in the early 1990's as a segment of his local television show Focus. He's an award-winning recording artist for Omega Records. Gino is currently working on his 8th album Merchants & Mercenaries. Gino took over Upcomingdiscs Dec 1, 2008. He works out of a home theater he calls The Reel World. Favorite films: The Godfather, The Godfather Part II, The Body Snatcher (Val Lewton film with Karloff and Lugosi, not the pod people film), Unforgiven, Gladiator, The Lion King, Jaws, Son Of Frankenstein, The Good, The Bad And The Ugly, and Monsters, Inc.
The Night Manager – Uncensored Edition (Blu-ray) Grey’s Anatomy: Season 12