Posted in: No Huddle by Gino Sassani on September 27th, 2016 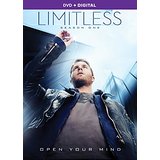 “My name is Brian Finch. I was your average 28-year-old screw-up until I took a pill called NZT. Suddenly I had access to every brain cell. And that’s why the FBI hired me. There’s just one problem. The NZT will kill you unless you have this shot.”

Brian is a guy with a lot of dreams but no ambition to actually make them work. When we find him he’s pushing an album that he hasn’t even written the songs for. Hey, don’t we all? His friends and family nod understandingly, all knowing he’ll never get around to any of it. He likes to get stoned, and there goes any real ambition he might have actually had. That is until he runs into an old bandmate who used to be just like him. Now he’s a power broker with money to burn. He offers to share his secret with Brian. It’s a clear pill he calls NZT. The pill allows you to remember everything you’ve ever seen or read in your life. The problem is that the crash is bad, and when Brian goes for more, he discovers his friend is dead, and he’s in the middle of murder and drugs and the FBI on his tail for both. Of course, on NZT he solves the problems for the FBI. They believe he is the only man they’ve ever found who is immune to the side effects of the drug which always lead to death. But Brian’s not immune.

He runs into presidential candidate Senator Eddie Mora, played by Bradley Cooper, who reprises the role from the film. He hopes to plant Brian into the FBI and to manipulate him with a shot that makes him immune to the side effects of NZT. It only last for about a month, which keeps Brian on his leash. Of course, he hides all of this from the FBI who are using him as an asset now and controlling his access to NZT for their cases. While Mora is played as the grey villain here, Bradley Cooper wasn’t going to be a regular on the show. It’s not likely his schedule would allow for that kind of thing. Instead he appears in a handful of episodes, and his right-hand man Jared Sands, played by Colin Salmon, gets to do all of the heavy lifting when it comes to interacting with Brian. He’s a mysterious ex-special-forces kind of guy who would shoot you in the head to make sure the gun was loaded. He’s absolutely a scary guy and one of the more dynamic actors/characters on the series.

Unfortunately, the same can’t be said for the rest of the cast. Jake McDorman is incredibly badly cast in the lead. When he’s trying to be cute, flippant, or charming, he’s just really annoying. He was well-cast in Greek some years ago, but that doesn’t translate at all here. He’s OK in small doses, but his act gets tired too quickly for a one-hour drama. Perhaps this would have worked better in a half-hour format. The same goes for the show’s style. It’s too often over-the-top with too many gimmicks. There’s a lot of experimenting going on here. Sometimes it works. Most times it doesn’t, and even when it does, it goes on for far too long. Again, maybe a half-hour format. An example is an episode about a serial killer. Brian’s inner child is traumatized by a crime scene, so a childhood dinosaur character in his head decides to substitute other words for “scary words”. Thus kill becomes hug, strangle becomes cuddle, stab becomes tickle, and blood becomes soda pop. Cute, right? Not when that substitution last the entire run of the episode.

Jennifer Carpenter is another terribly miscast actor. She was fine on Dexter, but it’s too early for her to be another cop, particularly on a show as annoying as this one can be. She has no chemistry with McDorman, but everybody connected with the show thinks they do. It’s actually pretty painful to watch.

There are some excellent actors in the cast. Hill Harper is badly underused as FBI Agent Spellman Boyle. He actually gives the show some limited cred as a cop show. There are times he’s obviously lost in the collapsing weight of the show’s attempts to be clever. Mary Elizabeth Mastrantonio is another excellent actor who is underused and kept in too many awkward situations. Brian’s parents are played by the very talented team of Ron Rifkin and Fringe’s Blair Brown. These are very promising characters that are once again discarded as relief from the crazy and not used nearly as often as they should have been. This is a case of completely wasted resources. Then there’s Tom Degnan and Michael James Shaw, who play Brian’s FBI bodyguards that he disrespectfully refers only to Mike & Ike. That’s not their real names, by the way. Cute, right? Not for 40 minutes.

There’s an overriding arc that deals with the people behind NZT and their attempts to control the world. Brian calls them the Legion Of Whom because they are trying to track them down. The plot appears to be stuck in the mud through most of the season with no satisfying conclusion to it all by the time it’s done.

And it is done. The show has a bit of a cult following, and Bradley Cooper has been reluctant to let it go when CBS dumped it after this one season. There have been talks of the show ending up on Netflix or Freeform, but none of that has actually happened to date. I really don’t see a future for this one, and I suspect that any future incarnation of the material will be a total retool/reboot. You get all 22 episodes along with a gag reel, a feature on transferring from film to series, and features on the show’s style. This release is strictly for members of the cult. I’m not saying the show is total trash. “I’ll explain. Mistakes were made along the way.”

Gino Sassani is a member of the Southeastern Film Critic's Association (SEFCA). He is a film and television critic based in Tampa, Florida. He's also the Senior Editor here at Upcomingdiscs. Gino started reviewing films in the early 1990's as a segment of his local television show Focus. He's an award-winning recording artist for Omega Records. Gino is currently working on his 8th album Merchants & Mercenaries. Gino took over Upcomingdiscs Dec 1, 2008. He works out of a home theater he calls The Reel World. Favorite films: The Godfather, The Godfather Part II, The Body Snatcher (Val Lewton film with Karloff and Lugosi, not the pod people film), Unforgiven, Gladiator, The Lion King, Jaws, Son Of Frankenstein, The Good, The Bad And The Ugly, and Monsters, Inc.
Warcraft (UHD Blu-ray) (4K) Empire: The Complete Second Season