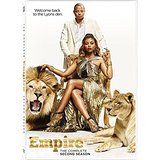 When Fox’s Empire premiered in early 2015, it became an instant sensation that re-wrote the ratings record books. The show’s mix of high drama and hip-hop obviously struck a chord with an underserved segment of TV viewers. Of course, that also means expectations were sky high for this second season. While Empire has inevitably lost some of the sizzle from its unprecedented debut, this unapologetically over-the-top soap rap-era has also managed to avoid the dreaded sophomore slump.

“This is epic. I mean a young prince paying homage to his father…very Shakespearean.”

In case you’re not familiar with Empire — essentially a hip-hop riff on “King Lear” that takes its episode titles from various Shakespearean lines — here’s a quick catch-up: Drug dealer-turned-mogul Lucious Lyon (Terrence Howard) is the head of Empire, a massively successful music and entertainment company. Lucious founded Empire with money from ex-wife Cookie Lyon (Taraji P. Henson), who demands half of the company upon being released from prison after a 17-year stint. At the start of the series, Lucious was diagnosed with ALS and had to decide which of this three sons would inherit his Empire: business-minded and bipolar Andre (Trai Byers), kindhearted gay crooner Jamal (Jussie Smollett), or immature rapper Hakeem (Bryshere Y. Gray). The season finale revealed Lucious had been misdiagnosed, but the mogul was still sent to prison for a murder committed many years before.

As a result, season 2 starts with Lucious in prison and Jamal running Empire under his father’s watchful eye. Meanwhile, Cookie, Andre and Hakeem plot a hostile takeover of Empire. They’re joined by Andre’s wife Rhonda (Kaitlin Doubleday) and Anika Calhoun (Grace Gealey), a former top executive — and main squeeze — of Lucious’ who is now involved with Hakeem.  It’s no major spoiler to say that Lucious doesn’t spend all 18 of this season’s episodes behind bars, so Cookie and her crew eventually decide to form a rival company called Lyon Dynasty. That’s just one of the many, *many* twists and turns as the Lyons fight each other for control of Empire while fending off a variety of outside threats. Those threats include an FBI investigation and the machinations of gloriously-named new power player Mimi Whiteman (Oscar winner Marisa Tomei).

Season 2 of Empire is 50 percent longer than the blockbuster first run of episodes. (18 episodes compared to 12 from season 1.) While you can’t exactly blame Fox for wanting more of a lucrative thing, the show’s wild and wacky plot swings — Empire has about five different CEO’s over the course of the season — become a little more tiresome and less impactful when they have to be stretched out over a longer period of time.

The show’s sophomore season also addresses issues of racial (bi racial singer Skye Summers, played by Alicia Keys, is chastised for being “black” only when it’s convenient) and sexual identity (Jamal puts his status as a gay superstar in danger by sleeping with a woman). The inherent loopiness of Empire sometimes makes for an awkward fit when the show decides to get super serious. (Season 2 also delves into Lucious’ tragic origin story as a boy with a mentally ill mother.) But it’s admirable that the series wants to use its massive platform — ratings may have plateaued, but it’s still a big hit for Fox — to tackle some of these topics.

Of course, the real star of Empire is often the music. And thanks to executive music producer Timbaland (who cameos in a season 2 episode), the beats on Empire are completely legit. I don’t feel like season 2 had a jam that jumped off the screen the way Hakeem’s “Drip Drop” did in season 1, but there were plenty of strong offerings, including the Jamal/Skye duet “Powerful” and Lucious’s hard-hitting “Boom, Boom, Boom, Boom.” The show’s musical cuts offers another lucrative outlet/revenue stream for Fox, the same way Glee previously did for the network and Nashville provided for ABC.

The acting on Empire is also strong across the board, which isn’t exactly a given the heightened drama and the number of musicians/inexperienced actors who pop up on the show. (Rapper Bre-Z has a prominent recurring role as a female protege of Lucious, and sometimes her line readings are a bit off.) Fortunately, the cast is led by the suave, snakelike charm of Howard, who plays Lucious as a dapper devil. The real breakout, however, is Henson, who brings just as many animal prints and one-liners as she did during the show’s initial run. The most impressive part of Henson’s portrayal is that she keeps Cookie from being a total cartoon by spotlighting the character’s driving motivation: her desire to keep her family together and preserve the Lyon name that she and Lucious built. Not surprisingly, the Hustle & Flow co-stars have terrific chemistry.

The Lyon cubs have a tougher time overcoming the show’s yo-yo storytelling — early on in the season, it looks like Jamal is about to become just like Lucious due to the stress of running Empire…but that promising story thread is quickly dropped — but Byers, Smollett and Gray largely acquit themselves well. My favorite addition, however, is The Wire‘s Andre Royo as Lucious’ thoroughly sleazy (and effective) lawyer Thirsty Rawlings.

Given that the first season of Empire was such a phenomenon, it’s not surprising to find that a bunch of people wanted to hop aboard this gravy train. The eclectic group of guest stars for season 2 includes Tomei, Keys, Chris Rock, Rosie O’Donnell, Ludacris, Kelly Rowland, Adam Rodriguez, and many more. They are joined by a gaggle of other celebrities (Al Sharpton, Pitbull, Ne-Yo, Nicole Richie, and director Lee Daniels, who co-created Empire with Emmy-winning writer Danny Strong ) who appear as themselves.

Empire: The Complete Second Season features all 18 episodes on five discs. The special features include Uncut Music Performances (Discs 2-3), along with Studio Sessions, a Freda Gatz Music video, and featurettes like “Empire Around the Globe: USO Tour” and “The Look of Empire“ (all on Disc 5).

Season 2 concluded with Lucious and Jamal competing for the same coveted award. The finale featured a wedding — though certainly not the two people you’d expect to get married — and a(n almost literal) cliffhanger where it appears one series regular fell to her death. Season 3 is already underway and I have no doubt the show will continue to simultaneously thrill and make viewers’ eyes roll on occasion. “That’s crazy how I can love your a– and hate you at the same moment.”