Posted in: Disc Reviews by Dan Holland on September 26th, 2016 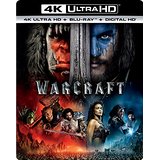 When it comes to titles from Blizzard Entertainment, I was always more into the Starcraft and Diablo franchises. I played World of Warcraft (WoW) for a small period of time when it became a popular MMORPG (Massive Multiplayer Online Role Playing Game), but my interest in the game quickly died. The aesthetics were a little too cartoony for my liking, plus, you paid for a subscription. Regardless, I am just one fan of Blizzard: WoW caught on like wildfire. I still know people who are playing the game to this day. The question, however, is whether or not this franchise would make a great cinematic adaptation. I will admit that I am not an expert on the Warcraft lore, by any means, but I know enough about popular culture and its many fandoms to look at this film objectively.

Sitting in a theater, you are always treated to interesting pre-screening conversations. More often than not, they are being led by fans of the source material. Here are samples of some of the conversations I overheard:

“So will this be like Lord of the Rings?” – Obviously someone tagging along with a friend who is more familiar with the franchise.

Man 2: “It would have to represent the story of the Warcraft games without sacrificing the fidelity of-”
I stopped listening there. Man 1 poses an excellent question, but my concern is the certainty with which Man 2 responded. Why does an adaptation need to remain faithful to a story you have already seen? Better yet, what gives Man 2 the authority to give that answer with confidence? Granted, this is not the fault of Man 2, as he is living in a society where cinematic pop culture is focuses on adaptation after adaptation, foregrounding nostalgia at every step of the way. Man 1 and Man 2 are products of this cinematic culture, but they also continue its propagation. So where does that leave me, Man 3? The movie begins.

The basic story being told in this adaptation involves a war between Orcs and Humans. An army of Orcs, or the Horde, has been taken over by Gul’dan (Daniel Wu), a sorcerer-like warlord who uses his new army to invade the human realm, Azeroth. In an effort to protect the King (Dominic Cooper), Alduin (Travis Fimmel) seeks the help of the guardian Medivh (Ben Foster). During their many run-ins with the Orc warriors, Alduin finds unlikely allies in Garona (Paula Patton), a human-like Orc used for pleasure, and Durotan (Toby Kebbell), an Orc who believes Gul’dan is poisoning the Horde with hate.

Throughout the film, you are treated to a wide array of visual effects. I applaud the choice to maintain a cartoon-like aesthetic for the Orcs, as you can clearly tell a lot of work went into their design and animation. Other aspects of animation, such as giant wolves, battle scenes, a golem, and a griffin: you could really tell they weren’t cared for as much as the Orc animation. However, the IMAX 3D glasses disguised a lot of that questionable imagery. In addition to the visual effects, we are treated to very dynamic crane shots every once in a while. I would have liked to see more of it: having my perspective of the scene pulled up and over the actors as a transition was very surprising. I understand that too much of a good thing can be tiring, but there are other ways to create dynamic camera movement without a crane, and the fact I didn’t see it was very disappointing.

So the visual effects were hit-and-miss, but that doesn’t matter. Visual effects are not the reason that I, Man 3, go to the movies. I go to the movies to watch an engaging story told through a very specific visual style. That is why I was very excited to see Warcraft. Duncan Jones, director of Moon and Source Code sits at the helm of this visual extravaganza. Typically, Jones offers the most engaging character studies I have ever seen, whether they are mysterious or action-packed. In my opinion, engaging character studies are very hard to pull off, but Jones manages to make you pay attention to the character’s changes, all while providing audiences with great entertainment. Knowing that Jones is an avid gamer, I was really looking forward to seeing his abilities as an auteur fused with the popular video game title. The issue was that there was not much to pay attention to outside of the visual effects.

Unfortunately (and perhaps it is no fault of Jones), this film is just the husk of fantasy movies that we are so used to seeing. There are similar story lines between warring races (try as they may to make it “fresh”), and above all, I saw strikingly similar visual motifs from both The Hobbit and The Lord of the Rings films, for example, Laketown from The Hobbit and Stormwind from Warcraft. Though architecturally different, they are both densely-populated towns with buildings close together, and we constantly see both cities in establishing shots throughout their respected film.

Now, I probably would have been able to overlook these recycled visual motifs had I been properly engaged in the story, but there were no interesting characters for me to pay attention to. The writing in this movie is severely disappointing. A conflict between warring races: I have seen that before. What is sad, however, is that there are attempts to bring some original drama and comedy into the fold. Over the course of the film there are characters mourning for losses they shouldn’t care about, given their relation to the loss. Also, there is way too much forced comedy, a painful amount. Jones’ directorial debut, Moon, had quite a bit of comedy and drama that I cared about. Warcraft just doesn’t seem like it fits into Jones’ oeuvre, and that might be attributed to the presence of another writer. Whatever the reason, Jones did not impress me this time around. I eagerly await his next film, as it appears that Mute is a return to his engaging, thrilling character studies.

Warcraft is presented in its original aspect ratio of 2.40:1. The ultra-high-definition  image is arrived at by an HEVC codec. The film itself may indeed be a disappointment but that can’t be said for this ultra-high-definition image presentation. This is the most impressive 4K disc I’ve encountered to date. I know we’re young into this format, but these guys got everything right. Colors are extremely vivid when they need to pop. Just as important, there is perfect color saturation. Reds don’t turn into fluorescent hunting suits. The detail in the color along with incredible textures make the computer-generated creations look as real as I’ve seen. This is an improvement in motion capture that has to be seen to be believed. The entire film builds some fantastic atmosphere from the green lightning and portal to the green flesh tones of the Orcs. Don’t buy this for the quality of the movie. Buy this because it will blow away your friends when you show off your 4K/HDR system.

The Dolby Atmos presentation defaults to a nice 7.1 track. Everything about this audio presentation is there to enhance the immersive experience we already have on the screen. The surrounds bring us the crackling of electricity or the extremely wide battle sounds. The score pushes through it all to add that emotional edge. The subs are going to move your room with every battle. Dialog pierces through it all perfectly. The subs also add some nice dynamic range to the Orc voices and movement. These guys cause just a little thunder just by walking. The sound field does a nice job of placing us in the correct environments. A lot of this was naturally ADR, so there’s the possibility that the texture of the voices and sounds won’t match. You only have the limits of your own setup to blame if it doesn’t piece together rather nicely.

Deleted/Extended Scenes: (13:56) There are 11 with a play-all option. These are also in various stages of f/x completion but mostly they’re close to finished product.

The World Of Warcraft On Film: There are six parts here and all less than 10 minutes. No play-all, so you have to keep the remote handy. The behind-the-scenes feature is split into six subjects:

The World Of Mo-Cap: (6:50) The performances in motion-capture

The Fandom Of Warcraft: (6:35) A look at the rabid fan base at a Warcraft convention. They got a little tease of the film.

Warcraft – Bonds Of Brotherhood (Action Comic): (53:46) The pages of a comic book with dialog and sound effects.

Warcraft – The Madam Tussauds Experience: (7:33) A bit of a promo and behind-the-scenes look at the waxwork exhibit in Berlin.

ILM – Behind The Magic: (2:58) This is a presentation of layers of f/x on a few scenes. It’s a montage of video set to film score.

Overall, was it a fun night at the movies? Yes. I did enjoy watching the film; I wouldn’t have turned it off if watching it at home. The bottom line is just that it was not impressive. The film is just another iteration of the fantasy genre that continues to be watered down as the years pass. The most unfortunate thing about Warcraft is that it was not great, nor was it terrible. It is a film that sits comfortably in the middle of the road, and as a result, will not be very memorable.