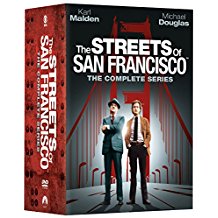 If you weren’t around in the 1970’s you might be surprised to find out that film superstar Michael Douglas was once in a television cop show. It was this influential crime drama that allowed Douglas to show off the acting chops that would earn him a spot in the Hollywood elite for decades to come. It didn’t hurt any that he was able to team up with Karl Malden, an undervalued talent in his own right. The two of them literally bring the show to life.  The series was run by Quinn Martin, himself no stranger to groundbreaking television. Martin was the same talent who created the crime drama with The Untouchables. His uncanny ability to come up with a clever premise was responsible for such milestones in television history as The Invaders and The Fugitive. Later he would continue to shape the look of television with shows like Tales Of The Unexpected, The FBI, and Most Wanted. He was the Steven Bochco of his time. Long before NYPD Blue, Martin was able to make San Francisco, the city itself, an iatrical character for Malden and Douglas to interact with. The show had tremendous style, even if the cases were purely formula. Certainly you won’t find anything in these plots you haven’t seen a hundred times before. What you will find is a unique presentation that somehow makes even the most mundane story appear quite compelling. If you enjoy the Bochco and Wolf dramas or fall in with such classics as Starsky and Hutch or Miami Vice, you owe a tremendous debt to Martin for setting the table for all of those fantastic meals that would follow.

Detective “Iron” Mike Stone (Karl Malden) is a seasoned veteran of the San Francisco Police Department. He’s an old-fashioned no-nonsense detective whose life has taken some bitter turns of late. Much to his aggravation he gets partnered with Keller (Michael Douglas), a green detective who hasn’t lost his belief that he can make a difference. Together they just might be able to teach each other something. Before long the two develop a teacher/mentor relationship that works well enough to solve the cases and get the bad guys.

There were at least a couple of standout episodes over the run. The episode I remembered most can be found in the first season. Beyond Vengeance is a breakout episode on many fronts. Stone must deal with a psycho he once put away, and the crimes touch home as his visiting daughter becomes a target after losing her best friend. The episode might be the turning point where Malden and Douglas begin to exhibit the depth of their relationship, and the chemistry just clicks. Another good one is Act Of Duty, where Keller’s cop girlfriend is killed and he has to stop her roommates from taking justice into their own hands. In Winterkill we have a modern Robin Hood story. An elderly guy steals from the rich to buy medications for old folks who can’t afford their medicine. It looks like that was a problem way back in 1972. A psychic is involved in a in a kidnapping case in Chapel Of The Damned. A cop’s snitch is killed when an angry group of citizens form a vigilante group after getting fed up with crime in their neighborhood in Rampage. The detectives investigate one of their own in One Last Shot. When a cop is killed, his partner’s story just doesn’t add up. Is it a case of a dirty cop, or is he covering up his own mistake? The Most Deadly Species has the detectives after a hit-woman. The show ventured into the then-hot topic of the Vietnam War and the protests. Keller infiltrates a group to catch the killer of a marine in I Ain’t Marchin’ No Anymore. Terrorists take Keller hostage in Flags Of Terror. Keller goes undercover at a mental hospital in shades of One Flew Over The Cuckoo’s Nest, which Michael Douglas produced. That story’s called Asylum. While Keller is in the hospital after getting shot, Stone is teamed with another young detective who might be part of the crime they’re investigating in the third season-ending episode, Solitaire. In Poisoned Snow, the duo are investigating the death of a cop but have to deal with his partner who keeps getting in the way intent on revenge. In No Place To Hide, the two go up against a gang of prison inmates who threaten to kill other inmates’ wives if the wives don’t help to smuggle contraband into the prison. Trail Of Terror has Keller trying to get past a gauntlet of bad guys to transport a witness. In Judgement Day a vigilante is going after soft judges whom he blames for destroying his father’s legal career. A teen girl is looking for her lost father, the same man Keller and Stone are trying to find, in Runaway.

CBS released this show over a couple of years in half-season sets. I never really liked that idea. I don’t like these overlapping cases much either, but I would rather have it all in one place. No extras, but you get the entire series run.

I don’t think I ever appreciated this series until years later when I began to see the effect it had on the landscape of prime time drama. Certainly there have been many shows that left their mark on what followed, and The Streets Of San Francisco is merely just one of them. It was unmistakably Quinn Martin, from the separation into acts to the hard-boiled dialog. There’s nothing flashy about this series, and I think that’s what I love best. Like many of the shows it spawned, Streets was a down-to-earth drama. No fancy gimmicks and no flashy cars. The two leads worked well together, and by season two got into a nice rhythm with each other. When they made enemies, boy, did they make enemies. “I don’t mean people who hate your guts. I mean people who wanna kill ya.”

Gino Sassani is a member of the Southeastern Film Critic's Association (SEFCA). He is a film and television critic based in Tampa, Florida. He's also the Senior Editor here at Upcomingdiscs. Gino started reviewing films in the early 1990's as a segment of his local television show Focus. He's an award-winning recording artist for Omega Records. Gino is currently working on his 8th album Merchants & Mercenaries. Gino took over Upcomingdiscs Dec 1, 2008. He works out of a home theater he calls The Reel World. Favorite films: The Godfather, The Godfather Part II, The Body Snatcher (Val Lewton film with Karloff and Lugosi, not the pod people film), Unforgiven, Gladiator, The Lion King, Jaws, Son Of Frankenstein, The Good, The Bad And The Ugly, and Monsters, Inc.
Guardians Of The Galaxy Vol. 2 Rings (Blu-ray)