Posted in: Disc Reviews by Brent Lorentson on May 8th, 2017 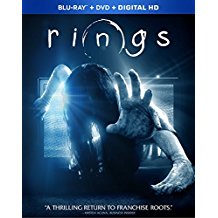 When The Ring (2002) first came out, if you looked hard enough you could still find movies on VHS, so the thought of a mysterious tape that kills you seven days after watching it wasn’t so entirely farfetched.  Now that we are in 2017, if someone were to find a mysterious VHS tape, well, they’d be out of luck for the most part, since I’d wager most of the US population no longer has a VCR.  But Hollywood won’t let this stop their successful franchise from moving forward, even though it’s been 12 years since The Ring Two, this weekend is the release of the third film in the series, and quite frankly, I have to wonder if anyone really wanted this.

Samara is back, and she is hungry to take the lives of anyone foolish enough to watch the video, and as the film opens we’re in a plane along with a passenger who has seen the film and only has minutes to go before his seven days are up.  While this is a fun scene that gave me hope for what would continue, I couldn’t help but feel that the scene was perhaps a throwaway sequence from Final Destination. Then, oddly enough, the film seems to start again, two years later when we see Gabriel (Johnny Galecki), a college professor, purchasing an old VCR.  Once Gabriel gets to his apartment, he gets a surprise when he discovers a tape with the words “Watch Me” written on it.  Just like all foolish characters in horror films, he watches the film and immediately gets the phone call.

The film then introduces us to Julia (Matilda Lutz) and her boyfriend, Holt (Alex Roe). They are a couple who are going to try to survive a long distance relationship while he goes off to college.  It doesn’t take long before things get a little strange, and Holt stops returning her calls and messages.  This of course motivates Julia to travel to the campus to see what is going on, and in the process reintroduces us to Gabriel, who is somehow still alive.

What gets introduced is something of a Samara fan club/cult where people have gotten together to research the tape and the urban myth.  To survive watching the tape, Gabriel is supplying tails, basically someone else to show the video to and pass the curse onto them.  I couldn’t help but feel this was an idea lifted from It Follows, but as they say, imitation is the greatest form of flattery.  Julia discovers that Holt is on the death clock, and to save him and give them time to figure the video out, she watches the video, but there is a catch: the video she watches is different, and this takes her and her boyfriend into an adventure to discover what the video is trying to tell them.

There are some really cool ideas going on here. I really dig the idea of the VHS tape now being a video file you can share online.  The way they use modern technology to uncover things gets pretty cool, but when you stop and think about what this vengeance killing spirit is doing, well, it doesn’t make a lick of sense.  The film comes with a twist (don’t worry, I’m being vague, and you won’t know what I mean till after you see the film) and it just simply makes no sense and throws off the mythology of the already established films. I think it’s fair to say I absolutely hated this direction they took.  But to go further about how things make no sense, when Julia is given a new mark (we see this in the trailer), when it gets explained I simply wanted to smack my head.  Why would Samara do this?

I was able to predict what would immediately follow, but they are few and far between.

Rings is presented in its original aspect ratio of 1.85:1. The 1080p image is arrived at with an AVC MPEG-4 codec at an average 35-40 mbps. This high-definition image presentation is quite a disappointment. The image is rather soft and doesn’t provide very much sharpness. Black levels are crucial here, but they often let you down. Backgrounds are usually fuzzy with an almost amateurish level of focus. There was tremendous potential for great textures here with the creature and water effects. None of this is the fault of the transfer as much as it is the cinematography of the source material.

The DTS-HD Master Audio 7.1 is a much more impressive affair. There’s a nice wide sound field here that actually delivers some of the creepiness that the image promises. There are nice water and squish effects that are pretty impressive. Dialog is clear and well-placed. The subs do a solid job, particularly on the requisite jump scares.

Terror Comes Full Circle: (12:37) Cast and crew begin by sharing their experiences and reactions to the original American version of the film. There are plenty of clips from that film to be found here. It evolves into a typical behind-the-scenes feature with plenty of production footage.

Resurrecting The Dead – Bringing Samara Back: (9:19) We get a long look at the 7-hour makeup process along with a lot from actress Bonnie Morgan, who also played the creature in the second Ring film. She’s a contortionist who created the iconic spider-crawl from that movie.

Scary Scenes: (6:35) The cast reveal their picks for the scariest scenes in the movie.

It’s frustrating. The film throws a lot of good ideas at the audience but doesn’t seem to stop and think about how this will benefit the story.  Oddly enough, the film just felt dated; this felt like it belongs in the horror class of Scream, Urban Legend, and Final Destination despite how much they attempted to give a modern look and feel to it.  I believe fans of the franchise will be divided on this one. You’ll have some who won’t care about the changes to the mythology and just enjoy the film. As for the fans who can go back and say they even have a copy of the original J-horror Ringu, well, I feel you’ll be a little disappointed.

Brent Lorentson is a horror writer and film critic based out of Tampa, Florida. With a BA in Digital Film, he co-wrote and co-directed Scavenger Hunt. His short stories have appeared in various horror anthologies. In 2019 his short script Fertile Blood will be a part of the anthology horror film Slumber Party. He is currently working on his first novel A Dark and Secret Place set to be released in late 2019. Favorite Films: Taxi Driver, Fight Club, I Saw the Devil, The Wild Bunch, Dawn of the Dead, A Clockwork Orange, Pulp Fiction, Heathers, The Monster Squad, and High Fidelity.
Streets of San Francisco: The Complete Series Tuesday Round Up: May 9, 2017