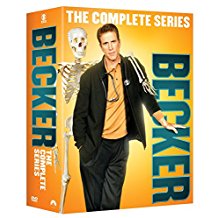 Who says no one likes a guy who’s negative all he time? Becker has got to be one of the most cynical, grumpy, and negative characters to grace our sit-com screens. He’s a guy you probably love to hate, and he’s also hilarious. Ted Danson spent over a decade behind the bar at Cheers and could have easily called it a career. You know, stop while you’re ahead. Instead he climbed right back into the television saddle and reemerged as Dr. Becker. This time he played a medical doctor who hates everything and everyone around him. Refusing to display that little bit of a heart we all know he has, Becker spends most of his life complaining about everything. Never before has it been so much fun to watch a guy moan and groan for twenty minutes at a time. Fortunately for him, Becker is truly a dedicated doctor, and while he’s likely to complain about it the whole time, he’ll go to any extreme to help a patient.

The secret to Becker’s genius is characters. Like Cheers before it, Becker is populated with wonderfully distinctive characters played by actors carefully cast for the roles. To start with there’s his office nurse, Margaret, played skillfully by Hattie Winston. Margaret runs things for Becker in his doctor’s office. She’s pretty much his mother and the brains behind the outfit. She’s one of those straight-talking ladies who don’t take any guff, and that means not even from Becker. The office assistant is Linda, played by Saw star Shawnee Smith. Linda’s used to getting by on her looks, which is fortunate because she naive and a little short on the intelligence front. How she got the job and holds it is anyone’s guess, but her blundering makes for some classic comedy. Becker spends much of his off time at a Café owned by Reggie. Reggie is portrayed by Star Trek: Deep Space Nine’s resident Trill, Terry Farrell. There’s a hint of a romantic interest here. Reggie is more interested talking about her own pitiful social life than serving her customers. Jake, played by Alex Desert, is blind, and interestingly enough runs a newsstand out of Reggie’s Café. He’s pretty much Becker’s best friend and often foil. A frequent patron of the Café is sleaze Bob, played by Saverio Guerra. He’s got the hots for Reggie and just about any other woman who meets his criteria (breathing) even though he’s married to an unseen wife. Bob always refers to himself in the third person and is clearly the most entertaining support character on the show. He was a recurring character up to year three where he was finally upgraded to regular. I can’t imagine the Becker universe without him.

The first season didn’t waste any time. We get to know these characters on the fly. From the first episode we know how dedicated Becker is as a doctor. In the second, Take These Pills And Shove It, Becker goes to extraordinary measures to convince a patient of the severity of his condition. The problem is the patient is too cynical and believes that Becker is just trying to make a buck from him. Sound like anyone you know?  In Man Plans, God Laughs, Linda is left in charge of the office. Becker utters one of his most classic lines: “I’m trying to like people more; it’s just so hard to weed through the stupid ones.” Boy, can I relate to City Lights. I am terribly light sensitive, so I know how he feels when a broken street light keeps flickering, causing Becker to lose sleep. His attempts to get the city to fix the light would be rip-roaring funny, if it weren’t so accurate. Becker’s words get him in hot water when a local columnist starts to print Becker’s observations in his column. That’s P.C. World, and anyone sick to death of political correctness needs to check that one out. Becker is just looking for some quiet time in Scriptus Interruptus after he’s chosen to write a medical journal article. In Becker The Elder, Dick Van Dyke stars as Becker’s father. Of course Becker hates him, but Dad charms all of his friends. Drive They Said is a crossover delight. Becker drives all of his friends around town for various appointments, only to end up in an accident. Meanwhile at his office are Doug Heffernan from The King Of Queens, Ray Barone from Everybody Loves Raymond, and Hilton Lucas from Cosby. Finally when Becker is having an unusual Lucky Day, he just can’t leave well enough alone. This is a very strong inaugural season for any series and a promise of much more to come.

The following five seasons provide just as many laughs. Becker might actually regret saving a woman’s life in Point Of Contact, when she begins to stalk him in gratitude. Becker gets shot when he ends up in the middle of a parking space argument in Stumble In The Bronx. Becker’s gunshot injury might be life threatening… to everyone around him, as he recuperates over the next few episodes. Santa is dead, at least the one in Becker’s waiting room is in the extra-funny Santa On Ice. When Becker decides to start doing more healthy things, his friends think he’s dying in The Rumor. In All The Rage, Becker is sentenced to anger management classes. That’s also the classic episode where Linda invites Bob to live with her when he’s kicked out of his own place. Becker’s latest flame turns out to be a hooker in the season two finale, Panic On The 86th.

The show ran for six seasons from 1998 to 2004. That came out to 129 episodes, and they are all here on 17 discs. Extras are rather limited to some cast interviews and blooper/sizzle reels.

Danson would show his versatility by going into dramatic roles after his stint on Becker. Of course, his run on CSI would demonstrate just how good the actor could be with or without the laughs. This is a chance to relive a series that has been overshadowed by his Cheers days and his more recent serious years. It deserves a bit more attention, and this complete series set is just your ticket.

Becker was a somewhat refreshing series when it arrived and one of the few I watched with any regularity at that time in my household. Certainly everything about the show is lowbrow, but it is almost always good for some serious laughs. Becker himself would likely describe it as “open mic at the trailer park”.

Gino Sassani is a member of the Southeastern Film Critic's Association (SEFCA). He is a film and television critic based in Tampa, Florida. He's also the Senior Editor here at Upcomingdiscs. Gino started reviewing films in the early 1990's as a segment of his local television show Focus. He's an award-winning recording artist for Omega Records. Gino is currently working on his 8th album Merchants & Mercenaries. Gino took over Upcomingdiscs Dec 1, 2008. He works out of a home theater he calls The Reel World. Favorite films: The Godfather, The Godfather Part II, The Body Snatcher (Val Lewton film with Karloff and Lugosi, not the pod people film), Unforgiven, Gladiator, The Lion King, Jaws, Son Of Frankenstein, The Good, The Bad And The Ugly, and Monsters, Inc.
Numb3rs: The Complete Series Major Crimes: The Complete Fifth Season