The Vampire Diaries: The Complete Eighth and Final Season (Blu-ray) 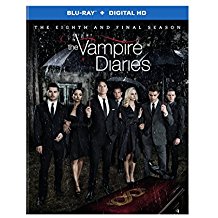 “Weird, messy, complicated, sad, wonderful, amazing, and above all, epic.”

It’s time to say goodbye to Mystic Falls. It’s time to say goodbye to Damon, Stefan, Bonnie, Caroline, and all of those fan-favorite “ships” that have passed in some rather bloody nights. After eight years The Vampire Diaries is getting the stake and fading off into the sunset. Eight years is pretty respectable when you consider that the series has been on the cancellation bubble since its fourth year. Somehow it managed to survive long enough to go out on its own terms and leave behind a strong enough legacy to assure its survival for years to come in syndication. While The Originals continues we are likely to see some of these characters, if only in guest spots along the way. There’s also rumors of yet another spinoff. It’s safe to say we haven’t quite seen the last of the show’s surviving characters, or even the ones who didn’t survive. For now it lives on in the Warner Brothers Blu-ray release of The Vampire Diaries Final Season release.

What is Mystic Falls? Who the heck are Damon and Elena, you ask? Bonnie? You’ve got questions. We’ve got answers, but not here. You’ve heard me say this before, and it’s become more and more true of television shows these days. If you don’t know what I’m talking about, you’re just not ready for the final season of The Vampire Diaries. But you are in luck. You can check out my reviews for the previous seasons here: Vampire Diaries Reviews. Then you can pick them up and start a mega-marathon session. Once you’re up to speed, join us back here for the next thrilling installment.

The final season is also a short season. There are only 16 episodes to bring in a new “big bad” and also tie up as many of these character arcs as possible. Unfortunately for many fans, it means killing off many of the characters. That’s one way to make quick work of their story, and this final season resorts to that option too often, in my opinion. It’s not like they didn’t see this coming for nearly four years. I think that Julie Plec had plenty of time to resolve these stories without taking the easy way out. The solution she arrives at for the brothers will likely be the subject of debate for years to come. I have to say I liked it.

“These were the marvelous singers, whose voice would make a man forget all else. And at least they would steal your life away.”

Once again we need a villain who wants to destroy or take over the world. In this case the show reaches back into Greek mythology and uses the Homer (no, we’re not talking Simpson) story of the sirens from The Odyssey. It’s what Damon and Enzo discover inside of the vault, and both become mind slaves to its awakening. They must feed it evil souls, which sends them on a journey to ask folks what the worst thing they ever did might happen to be, under compulsion, of course. Meanwhile Stefan and the crew are trying to find them. Alaric has taken over the Armory with student interns, for crying out loud. One of the most interesting is Georgie Dowling, played by the enchanting Allison Scagliotti. Most genre fans know her from Warehouse 13. I expect we’ll see her again…and very soon. Caroline is raising the magical twins with the help of a mysterious nanny named Seline, played by Kristen Gutoskie. The trilogy of new women players is rounded out by Nathalie Kelley, who plays Sybil, the siren with a compelling voice.

It’s also nice to see Matt return with more to do in these final episodes. His family plays an important role, and he manages to take over the Mystic Falls sheriff’s office once again. His family has been guardians of a mystical bell since 1792. This one doesn’t have a crack in it, but it has the power to bring hellfire down on the town and those around it. It is also used to create a bit of a reused plot device of opening a door to hell that allows some escapes. It’s a cheap plot device to allow us to revisit some of the old baddies for a while. But this season didn’t have time to play these games.

The bell also serves to bring over the “real” super-bad of the season in the form of Cade, who is apparently the Devil himself, and he’s been just using the other elements for his own evil plot. The season provides a seesaw plot of the brothers working for whomever to seal a deal to protect someone else. Plec thinks the idea is a good one. How do I know? Because she decides to use it over and over in this season. Cade as played by Wole Parks has some good presence, but honestly, I would have stuck with the women.

We get to go inside of the characters’ minds, and that’s where we get to see some other familiar faces from the show’s past. Of course, we have these cameos to pay off the fans one more time before the season ends. It’s a bit of a side trip, but I understand the need to do it.

Last Days Of Being A Vampire: (14:46) Hang out on the set in the show’s final hours. Cast and crew talk about saying goodbye, and we see many of the actors’ series wrap moments.

Finally, the season has to end with the return of Nina Dobrev. I’ve always said she was the weak link in the show. Yeah, she needed to be there for the finale, but she continued to be weak. The real emotional final beat is the last scene with the brothers. The Vampire Diaries was never about Elena. It was always about the brothers, and it was always best when the writers kept that in mind. It’s here that the show began and here that it appropriately ends. But it’s not really over. The Originals has also been on the bubble for a year or more. There are conventions, fan fiction, and possible spinoffs to come. “Let’s just say the game’s not over yet.”

Gino Sassani is a member of the Southeastern Film Critic's Association (SEFCA). He is a film and television critic based in Tampa, Florida. He's also the Senior Editor here at Upcomingdiscs. Gino started reviewing films in the early 1990's as a segment of his local television show Focus. He's an award-winning recording artist for Omega Records. Gino is currently working on his 8th album Merchants & Mercenaries. Gino took over Upcomingdiscs Dec 1, 2008. He works out of a home theater he calls The Reel World. Favorite films: The Godfather, The Godfather Part II, The Body Snatcher (Val Lewton film with Karloff and Lugosi, not the pod people film), Unforgiven, Gladiator, The Lion King, Jaws, Son Of Frankenstein, The Good, The Bad And The Ugly, and Monsters, Inc.
The Wedding Party The Young Pope (Blu-ray)