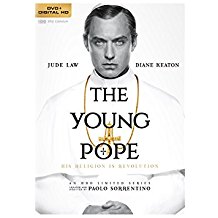 “Have you ever seen two priests wearing tracksuits?”

The highest praise I can offer for The Young Pope — the staggeringly extravagant and deeply strange co-production between Sky Atlantic, Canal+, and HBO — is that I can guarantee you will see something you have never seen before. (A pair of priests in tracksuits is the least of it.) The show is bold in both its style and storytelling, although it only unequivocally succeeds in one of those two areas. Given all the Vatican-centric politics and power plays, it’s easy to see why this show was dubbed “House of Cardinals.”

Jude Law stars as Lenny Belardo, who becomes the first American pope and takes the name Pius XIII. Turns out the people who schemed to get Lenny elected — most notably, Cardinal Secretary of State Angelo Voiello (Silvio Orlando) — had idea how unlucky the number 13 would be for them.

“The young are always more extreme than the old.”

Despite being a young pope in a modern world, Lenny quickly reveals his decidedly old-school plans for the future of the Catholic Church. In addition to a zero-tolerance stance on issues like abortion, common law marriages, and homosexuality, Lenny rejects the idea that the Church should appeal to the masses. (He “deletes” the word compromise during a spellbinding speech to the cardinals in the Fifth Episode.) To help him carry out his vision, Lenny brings in Sister Mary (Diane Keaton), the nun who raised him and closest friend Andrew Dussolier (Scott Shepherd) after Lenny’s parents dropped him off at an orphanage as a child. That early abandonment is one of the reasons Lenny says he loves God more than he loves people. And despite being consistently presented as a saintly figure, this is also a pope who repeatedly wrestles with his own belief in God. But does that make him more or less worthy of the papacy?

“We love God because it is so painful to love other men and women.”

The driving forces behind faith and doubt are just two of the issues explored on this series. The Young Pope is created by Paolo Sorrentino, the Italian filmmaker who won a Best Foreign Language Oscar for 2013’s The Great Beauty. Sorrentino also directed every episode along with either writing or co-writing each installment, so it is safe to say everything we see on screen reflects his singular vision.

“We don’t lack for imagination around here.”

Whereas Lenny has oppressively rigid ideas about the direction the modern Catholic Church should take, Sorrentino brings a bracing and stunningly loose sensibility to what is historically a pretty rigid institution. And it’s not just sublime, absurdist touches like the recurring visual gag of nuns playing basketball/soccer or using “Sexy and I Know It” for a montage of Lenny getting to address the cardinals. (It’s also worth mentioning that the very first episode opens with the new pope crawling out from under a mountain of babies…so, yeah.) The Young Pope boasts a dazzling visual style that painstakingly re-creates segments of the Vatican while simultaneously leaning into the otherworldly (and anachronistic) nature of such a sacred place.

“We shall generate hyperbole.”

The House of Cards comparison is a good one, and actually a point in favor of The Young Pope since Vatican City is a less obvious setting for politics and power plays than Washington, D.C. Both shows somewhat suffer from the fact that their lead characters don’t really have worthy adversaries. (For a minute, it looked like the Italian Prime Minister played by Stefano Accorsi might fill that void in Pope.) The biggest difference is that while Frank Underwood had to claw and connive his way to power on Cards, Lenny starts out on top. Of course, Cards had multiple seasons to play with, while Pope only had 10 episodes to tell Lenny’s story, but it still saps an element of drama from the proceedings.

Law is excellent and commands every scene as the handsome and charismatic pope. My other favorite Law performances (The Talented Mr. Ripley, Gattaca) also tweak or twist the actor’s good looks and suave persona. Here, Law’s Cheshire Cat grin masks what is a truly irritable and vindictive pope. In short, he’s playing a thoroughly flawed and human character who is required by his position to be closer to godliness than the rest of us…and the actor completely pulls it off that dichotomy.

Keaton is very good, if somewhat underused, as Lenny’s surrogate mother, while James Cromwell is appropriately bitter as Cardinal Spencer, the man who was bypassed for the papacy in favor of Lenny…and father figure to the younger man. My favorite supporting performance is Orlando’s slimy, funny, suck-up work as Cardinal Voiello. The character is originally presented as an overmatched schemer, but the show also displays Voiello’s compassionate side along with his genuine commitment to doing what is best for the Catholic Church. (He believed a more progressive pope was the answer.)

The other members of the international cast are all solid — Ludivine Sagnier as the woman who connects with the pope and desperately wants a baby; Javier Camara as Monsignor Gutierrez, who is tasked with handling an important case in the U.S.; Cecile de France, who really pops as the marketing head for the Holy See — but each ultimately take a backseat to Lenny’s arc, particularly the pope’s childhood abandonment issues.

The Young Pope is presented in an aspect ratio of 1.78:1. The 1080p image is arrived at with an AVC MPEG-4 codec at an average of 27 mbps. The series is consistently bathed in fiery reds and deep blacks — the preferred colors of the cardinals in the Vatican — along with the resplendent whites on virtually everything Law wears as the titular character (including that tracksuit). Sorrentino often favors a beatific, intentionally-overexposed image during certain outdoor sequences, lending them a dreamlike quality. However, every interior shot of the Vatican is characterized by mind-blowing and extraordinary detail (costume, set design). Meanwhile, the flashback sequences depicting Lenny’s childhood have an effective, desaturated appearance that clearly delineates the two time periods. In short, Sorrentino brings a grand cinematic sweep to his first foray into series television…and it makes for a completely stunning visual experience.

The DTS-HD Master Audio 5.1 track is almost as good as the exemplary visual presentation. Although the subs aren’t pressed into action too often, they provide a useful sense of scope during any sequence where the Holy Father addresses a raucous crowd. They also thump impressively whenever Sorrentino cranks up the electronic music on the soundtrack (which we know Pope Pius XIII favors). Just like its visual counterpart, this track features fun stylistic flourishes, such as alternating between muffled and clear dialogue during a clever sequence at the start of the Fourth Episode. Surround activity isn’t quite as aggressive as the visual tricks this show pulls off, but the rear channels still provide steady and impactful support. Definitely a track worthy of the show’s scope and ambition.

Inside the Episodes: (14:24) HBO offers these featurettes for many of its shows, although The Young Pope lumps two episodes into each “Inside the Episode” segments. Creator/director Paolo Sorrentino and executive producer Lorenzo Mieli mostly just rehash the events of each episode and very quickly note some of the story’s themes. Unfortunately, these segments are simply too short — fewer than two minutes for each episode — to offer anything substantial or worthwhile, although Sorrentino does reveal he wanted to leave it up to the audience to decide if Lenny was actually a saint. Available on all three discs.

An Invitation to the Set: (3:07) Not nearly as exciting as the title makes it sound, given how stunning the sets on this show are. Instead, this is a pretty conventional “Making of” look at the series, featuring cast and crew comments along with some peeks at the filming of the show. Available on Disc 3.

The Making of The Young Pope: (11:26) Now, *this* is the sort of behind-the-scenes featurette I was looking for. In addition to comments from Law, Sorrentino and the rest of the cast and crew, we get a look at the creation of the lavish costumes/jewelry, the outrageously massive and detailed sets, and some insight into filming in Rome. Easily the best special feature of the bunch…and I still wish it had been longer. Available on Disc 3.

The Young Pope features all 10 episodes on three discs. Although this was originally billed as a limited series, Sorrentino has announced plans for a follow-up called The New Pope.

While it’s hard to imagine this show without Law at the moment, I’m excited to see what Sorrentino has up his sleeve with this series. The Young Pope is likely to knock you off-balance in the same way the title character consistently zigged when both his confidants and rivals expected him to zag. It’s certainly not comfort TV…but considering there has never been more original programming on the air, I appreciate any show that takes bold, audacious swings and connects off with such remarkable style.