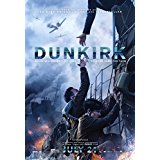 When Christopher Nolan has a new release, it’s an event to get excited about. There are few directors I can say this about. Sure, there are directors that I like, but still there are few who manage to capture what makes going to the cinema an experience. Dunkirk is his latest cinematic opus. Despite it being his shortest film, with the exception of The Following; this is the first time he has shot a film entirely in IMAX form. What’s the big deal? Well, aside from the picture being twice the size of the regular format, what he does with these cameras is deliver a beautifully striking picture of destruction and survival.  There’s a lot of buzz going around with this film, and already it’s being looked at as the first real Oscar contender of the year.  Is the film worth the hype?  Is it really Nolan’s best picture?

The film has three stories going on at one time; we have the soldiers who we are following as they are attempting to flee the beach.  We have a father, played by Mark Rylance, who along with his sons uses his yacht to sail to Dunkirk to rescue as many soldiers as they can. Then there is a pilot, played by Tom Hardy, who is one of three pilots who are attempting to provide protection for the ships departing Dunkirk.

Hardy, as the spitfire pilot, is very much another character where we are rooting for them, but it would have been nice to know a little more about them.  Granted his actions throughout the film will have you engaged with his character, but I just wanted a little more.

As for the true spectacle of the film, the massive amount of destruction and constant peril we witness on screen — that is what works here.  The film is simply unrelenting when it comes to the struggle these characters are faced with.  The moment a character escapes one torturous situation they seem to be flung into yet another.  There will be some who may find the experience of the film a bit hard to watch if not exhausting to endure.  The film clocks in short of two hours, and from start to finish it will have you gripping your seat as you watch, hoping that by some miracle these men will all manage to survive.

Brent Lorentson is a horror writer and film critic based out of Tampa, Florida. With a BA in Digital Film, he co-wrote and co-directed Scavenger Hunt. His short stories have appeared in various horror anthologies. In 2019 his short script Fertile Blood will be a part of the anthology horror film Slumber Party. He is currently working on his first novel A Dark and Secret Place set to be released in late 2019. Favorite Films: Taxi Driver, Fight Club, I Saw the Devil, The Wild Bunch, Dawn of the Dead, A Clockwork Orange, Pulp Fiction, Heathers, The Monster Squad, and High Fidelity.
Contest: Win The Fate of the Furious On Blu-ray From Universal Studios Tuesday Round Up: July 25, 2017