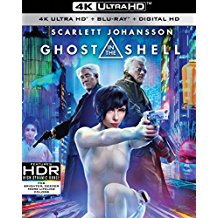 Looks like the unofficial theme of this week’s Tuesday Round Up is girl power! Scarlett Johansson looks good in any situation, but Paramount was generous enough to present her in dazzling 4K with this week’s release of Ghost in the Shell, a live-action adaptation of the Japanese manga/anime classic. HBO says farewell to Girls: The Final Season, while Warner Bros. bids an honest goodbye to Pretty Little Liars: The Final Season. Warner also remembered to send along the Rosario Dawson/Katherine Heigl thriller Unforgettable. Meanwhile, Lionsgate/Vestron Series momentarily crashes this girls party with the Warlock Collection on Blu-ray.

Luckily, the end of the week gets us back on brand with the release of the Charlize Theron action romp Atomic Blonde. Now it’s time for the customary reminder before signing off for the week (and for July): if you’re shopping for anything on Amazon and you do it through one of our links, it’ll help keep the lights on here at UpcomingDiscs. See ya next week!