Contest: Win The Fate of the Furious On Blu-ray From Universal Studios 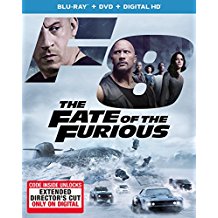 Hot cars and plenty of explosive action. If that sounds like your idea of a good time our good friends over at Universal Studios have just the thing. They’ve given us a copy of The Fate Of The Furious on Blu-ray to give to one lucky Upcomingdiscs reader. It’s family against one of their own in this eighth entry in the Fast And The Furious franchise. Dwayne “The Rock” Johnson, Vin Diesel, Jason Statham, Kurt Russell, Scott Eastwood, Michelle Rodriguez and Charlize Theron want to bring the party over to your house.

Gino Sassani is a member of the Southeastern Film Critic's Association (SEFCA). He is a film and television critic based in Tampa, Florida. He's also the Senior Editor here at Upcomingdiscs. Gino started reviewing films in the early 1990's as a segment of his local television show Focus. He's an award-winning recording artist for Omega Records. Gino is currently working on his 8th album Merchants & Mercenaries. Gino took over Upcomingdiscs Dec 1, 2008. He works out of a home theater he calls The Reel World. Favorite films: The Godfather, The Godfather Part II, The Body Snatcher (Val Lewton film with Karloff and Lugosi, not the pod people film), Unforgiven, Gladiator, The Lion King, Jaws, Son Of Frankenstein, The Good, The Bad And The Ugly, and Monsters, Inc.
Time-Life Brings Back The Good Ole Days Dunkirk