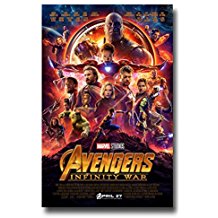 Whenever a filmmaker is doing a middle film in a trilogy, or merely a film that’s intended to be a companion film in a series, they often talk about attempting to capture The Empire Strikes Back. For years it’s been the standard-bearer for anyone trying to end a blockbuster with a cliffhanger knowing it might be years before the ending is resolved for the audience. That’s harder to do today than it was in the 1980’s. I often say that the only thing wrong with instant gratification is that it simply takes too darn long. The Avengers: Infinity War is exactly that kind of film. It ends with huge elements left up in the air, but at least we’ll only have to wait a year for its resolution. After watching how Anthony and Joe Russo have handled this nearly impossible task, I think the bar has now shifted. In Empire Strikes Back lexicon, let’s just say the Russos just pulled out a huge chunk of carbonite, and future filmmakers will be using this as an example of how to pull of that herculean task in the future. The Avengers: Infinity War is finally here, and it pretty much lives up to all of my expectations. Now my expectations are going to need a bigger boat.

The film’s story allows for a lot of discovery along the way, and I’m not going to offer many details here. If you’re looking for spoilers, I’m sure there are plenty of places you can go for those. I will tell you that stingers are important and have consequences in the MCU. If you stayed for the stingers in the recent Thor film, you will be rewarded as Infinity Wars begins. The movie starts as almost a direct sequel to that film and the stinger that bridges the films. The action ramps up immediately, and I will say that it’s not just stingers that have consequences. Consequences for the MCU and its many characters begins immediately and rather shockingly. Of course, it’s no secret that the star villain of the piece is Thanos, played through voice and motion capture by Josh Brolin. He’s sporting a shiny golden gauntlet with six spaces to hold the six infinity stones that have been a part of this long film run almost since its inception. By now we know what these various stones are and where they can be found, so it doesn’t take Thanos long to track them down one by one. It’s the job of the various Avengers to keep him from obtaining all of the stones, because Thanos wants to eliminate half of all life in the universe in his misguided notion of saving it.

The Avengers are never really all together in the movie. In recent movies they have been scattered throughout the universe on their own adventures. While they never get a chance to all come together for the fight, there are quite a few combinations of heroes, each with their own part of the Infinity Stone puzzle to protect. These missions take us to some iconic locations in the Marvel universe that we haven’t seen before on the screen. Earthbound heroes attempt to do their part here, and much of that story unsurprisingly takes place in Wakanda, a world we only recently explored in The Black Panther. If you’ve seen the trailer, you know that nearly every character from a Marvel film shows up, if only briefly, in the story. Any that haven’t yet arrived will be present in the second film, which was shot pretty much along with this one. That means we won’t have to wait 2-3 years for the resolution. It will all be completed in just a year from now in May of 2019.

While I won’t talk about the missions and adventures these small groups of Avengers embark upon, I will say that some of the combinations are clever and smartly played out. Teaming Thor with the Guardians of the Galaxy turns out to be priceless, as does the time spent between Tony Stark and Dr. Strange with a little Peter Parker/Spiderman thrown in for good measure. It’s obvious that a lot of thought went into the combinations, and this film doesn’t have that potential “thrown together” feeling that could have so easily turned this all into an expensive farce. I truly get the logic behind the teams, and the result is a maximum of chemistry and wonderful character moments. The emotional range of this film took me by surprise. There are heartbreaking moments hand in hand with inspired comedy. The movie is by far the darkest of anything you’ve seen yet, but the Russo Brothers manage to balance it all in a way that Zack Snyder and his friends at DC still haven’t discovered how to do. What makes that situation worse when you compare this to Justice League is how easy the Marvel people make this look. Somehow the complicated recipe of tones just seems all too natural.

The visual effects of the film go beyond anything you’ve encountered in a comic film. It’s not just explosions and great displays of power. It’s a ton of different places and atmospheres that make the nearly three hours fly by. There’s no time to be complacent or to get used to a specific thing or place. You’re literally whisked away every few moments to someplace new and exciting. I guess I’m trying to say that after 10 years, this stuff never seems to get old.

The greatest treasure you will encounter here is that Infinity War demonstrates just how diverse the MCU actually is by this time. As you encounter each set of characters, you genuinely feel like you’re in their movie for a time. Nowhere is that more true than in the introduction of the Guardians of the Galaxy. That is an incredibly hard thing to do and make feel at all cohesive. It’s like you’re watching several different films with very different themes and tones, and yet it all works as a single unit. Is it a busy film? Absofreakinglutely! If the film has a major flaw, it’s just how ambitious it all is. There are perhaps too many things going on at the same time, and it all demands more of your attention than you might have been prepared to give. There are too many characters here to truly serve them all, and I’m sure there are folks who will feel that certain characters were cheated to make way for too much of another. I honestly didn’t feel that way, but it’s inevitable that there are fans who will. What I can promise you is that all of the characters here get at least a moment that is all their own. It’s great to see how Tony Stark and Steve Rogers particularly have evolved over the years since their Civil War. They are both instantly familiar, but they have changed so much over the years that they are far from the characters they were in their own introductions. The changes are comfortable, and it’s really like hanging out with old friends you might not have seen in a while. These are not f/x avatars, but feeling and changing people. And it’s still those character moments that steal the show even amid so much eye candy. Banner and Hulk get the best of their screen moments ever. This film explores that inner conflict between the two characters like only the comics did so far. Even after 10 years, there’s still a lot to learn about these characters.

Finally, I went into this film mostly worried about Thanos. CG-created bad guys are a crapshoot. In the hands of a pioneer motion-capture artist like Andy Serkis, there can be a world of difference. He’s not doing this, but give Josh Brolin and the f/x team a lot of credit for giving Thanos a wonderfully emotive performance. In the comics he was a truly iconic big bad, and that translated here better than I could have ever hoped. He’s believable, and he’s real. That makes his threat so much bigger and more meaningful, and like all really good bad guys, he thinks he’s the ultimate good guy.

Stay for the single stinger at the end of the credits. It is that beacon of hope that the film needs to carry us until next May. That’s if you pay attention and your Marvel iconography is up to code. If it is, you have reason to cheer even during the MCU’s darkest hour. We’ve been promised that it will all change with these two films. Believe it. The MCU will never be anywhere near the same again after these two films. Not everyone is going to make it. If you consider that a spoiler, you haven’t been paying attention. There’s a lot to love and maybe just a little to hate here. But it will be one hell of an experience. All I have left to say is, “Come and get some.”

Gino Sassani is a member of the Southeastern Film Critic's Association (SEFCA). He is a film and television critic based in Tampa, Florida. He's also the Senior Editor here at Upcomingdiscs. Gino started reviewing films in the early 1990's as a segment of his local television show Focus. He's an award-winning recording artist for Omega Records. Gino is currently working on his 8th album Merchants & Mercenaries. Gino took over Upcomingdiscs Dec 1, 2008. He works out of a home theater he calls The Reel World. Favorite films: The Godfather, The Godfather Part II, The Body Snatcher (Val Lewton film with Karloff and Lugosi, not the pod people film), Unforgiven, Gladiator, The Lion King, Jaws, Son Of Frankenstein, The Good, The Bad And The Ugly, and Monsters, Inc.
The Post (UHD Blu-ray) (4K) Backstabbing for Beginners (Blu-Ray)