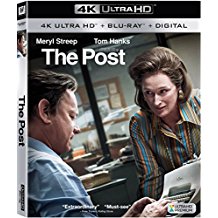 Several movies have been released over the past three decades that defend the press or show the importance of the media to inform the public.  This is one of them that for the most part does reveal the inner sanctum of one newspaper as it deals with exposing the government for wrong decisions leading to the death of thousands in the Vietnam War. While the script does reveal the sadness of human life losses that could have been avoided, unfortunately the film uses it to glorify newspapers using old news.

A platoon starts taking heavy fire in a wooded area, and the body bags start to fill at a high rate.  It’s the Vietnam War in 1966, and Assistant Secretary of Defense Daniel Ellsberg (Matthew Rhys) has just returned from a bloodbath after an ambush by the Viet Cong. Inserted as a military strategist under the Pentagon’s Assistant Secretary of Defense for International Security Affairs John McNaughton, he’s observing the war firsthand.

On Air Force One flying back to the United States, Ellsberg is asked to meet with Secretary of Defense Robert McNamara (Bruce Greenwood) in the forward compartment. When he approaches McNamara, he’s discussing the war situation with Robert Komer (David Beach). Komer is organizing the Civil Operations and Revolutionary Development Support program for Vietnam. McNamara turns to Ellsberg and asks him what he feels about the war and if things are better or worse. Ellsberg replies that things are the same, to which McNamara replies that then things have gotten worse.

When Ellsberg hears the opposite from McNamara at a press conference, he goes back to his office at the Pentagon and pulls classified reports from his files. So begins a dangerous war of nerves as Ellsberg leaks the information to the press. Known as the Pentagon Papers, the disclosure is that the war could have never happened and should have ended six years earlier with the U.S. pulling out of Vietnam. The film opens a can of worms that includes President Harry S. Truman, President Dwight D. Eisenhower, and President John F. Kennedy, finally being resolved by President Richard Nixon.

That’s the real meat of the movie, and it happens in the first ten minutes.  The film then turns to more of a glorification of the Washington Post. Yes, there is a point that the publications were putting their businesses on the line as the federal government forbade the newspapers from publishing classified documents.  Along with a boring look into the business end of the Washington Post, that’s what the rest of the movie is about.

As far as the acting goes, both Tom Hanks and Meryl Streep do their normal best as the Editor and Publisher of the Washington Post.  It’s 1971, and under pressure Managing Editor Ben Bradlee (Hanks) and Owner Kay Graham (Streep) are backed into a corner when the New York Times runs a story involving the Pentagon Papers. They want a piece of the action and worm their way into one of the biggest news stories of the twentieth century. If the Washington Post could get a copy of the government classified papers, it would change the outlook of their newspaper’s bottom line.

The newspaper business is not all glitz, glamour, and games, and the film does drop a few lines on their shady tactics. In one scene Editor Bradlee gets a tip that a reporter at the NYT may be up to something important.  He asks a Post intern to hop a train and go to the New York Times. He’s not to tell them who he works for, but to contact one of their reporters Neil Sheehan (Justin Swain) and find out what he’s working on.  The Post intern asks him if it’s legal to do this, and Bradlee with a smile responds, “Well, what is it you think we do here for a living, kid?”

The Post is presented in an aspect ratio of 1.85:1. The ultra-high-definition 2160p  image is arrived at by an HEVC codec with an average bitrate of 65 mbps. The detail of the film’s production design is where the true payoff of this ultra-high-definition image presentation can be found. The sharpness allows you to read pages of prop newspapers to discover that they are complete reproductions down to the article texts. Usually there’s gibberish, but not here, and you’ll be able to read it some without even pausing. Colors are often muted. The newsroom is an almost monochromatic throwback to the period, while it’s the costumes that allow for a splash of color here and there. It’s texture over vivid colors that take advantage of the format. Spielberg shot on 35mm film, so we also have the advantage of a true native 4K source. Black levels are average, stifled somewhat by the intentional period mood.

The DTS-HD Master Audio 7.1 presentation is there primarily to serve the extensive dialog. There is a rather unique effect present in this particular audio presentation. It’s the use of surrounds, which often go from absolute silence to a busy surround environment. It’s almost as if you suddenly notice it go on at certain moments. The busy newsroom is the most obvious example of this effect. Surrounds jump at you abruptly when a character walks from a quiet office to the main area of the newsroom where the era’s typewriters clatter with an emotion almost their own. You get this to a lesser extent on city streets. Dialog, of course, is the center of it all and enjoys nice placement and quality.

The extras are all on the Blu-ray copy of the film. I have heard some folks call this unfortunate or complain. Understand that the best discs allow the film to use the ENTIRE bandwidth of the disc for audio and video reproduction. Trust me when I tell you that you want things to remain just this way.

Layout – Katharine Graham, Ben Bradlee – The Washington Post: (21:51) This feature plays out almost like a historical documentary. Cast and crew are joined by people who were there and family members of both Graham and Bradlee to talk about the real story here, which isn’t the Pentagon Papers, but the rise of these characters and the paper itself.

Editorial – The Cast And Characters Of The Post: (15:56) Spielberg talks about the benefit of having access to principals and family members in telling this story. You also get profiles on the characters and actors who play them. Plenty of insight from the cast here.

The Style Section – Re-Creating An Era: (17:02) This is a nice look at the production design, from real paper reproductions to the massive printing presses. Cast and crew talk about stepping into a time machine and visiting Washington in 1971.

Stop The Presses – Filming The Post: (25:34) Much of the material has already been covered, so this feature focuses heavily on Spielberg, who appears to be in every frame. You get the mutual love-fest kind of participation here.

Arts And Entertainment – Music For The Post: (6:45) John Williams has worked with Spielberg for 44 years, and this feature looks at their working relationship and mutual trust scoring this film.

Not to use a pun, but some news media have been saying that the Washington Post is taking credit for what the New York Times did.  It’s a moot point considering the movie centers on one of the newspapers and their contribution to uncovering the facts behind the needless loss of American soldiers in the Vietnam War. An interesting film that recalls a negative era of U.S. military history.

John Delia has been on all sides of the movie business from publicity, writing for publications and on line blogs, script writing, to film making. Writer, critic, film editor he has worked as a film critic on this second go around for 14 years. He earned his Bachelor’s degree at the college of Journalism and Communications at the University of Florida in Gainesville, Florida. John is an active member of the Southeastern Film Critics Association (SEFCA) . Favorite Films: Lord of the Rings/Hobbit trilogies, The Godfather trilogy, the Indiana Jones trilogy (I didn't like the 4th), The Avengers and for TV it's Game of Thrones. As for animation it's a tie between anything Pixar and everything Hayao Miyazaki.
Tuesday Round Up: April 24, 2018 The Avengers: Infinity War