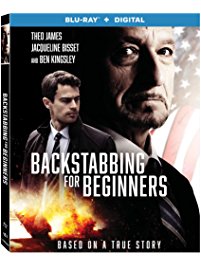 Like probably most folk out there in the real world, I learned everything I know about foreign diplomats from television and film. They dress in expensive suits, usually have a drinking or smoking problem, and harbor some immense secret that could bring about the fall of a whole country or even the world. They don’t have friends or associates, instead they have pawns that they move around a theoretical chess board for influence and money. Finally, they would sell out their own grandmother if it meant a little more information at the bargaining table. Today, I review Backstabbing for Beginners, a movie that deals with UN Diplomats and the country of Iraq. Somehow, I don’t think my opinion is going to change.

The New York skyline, September 2003. We are at the Wall Street Journal building and Michael Sullivan (played by Theo James) has a story to tell. We fade to black and then see an Iraqi propaganda piece before arriving at the United Nations Building in October of 2002. Michael has been called in for an interview, actually the fourth time he’s tried to find work as a diplomat.

The interviewers ask him a bunch of questions and do remember his dad who was also a diplomat. Unfortunately, they also remember the father met his end in the line of duty. As with most job interviews, they say they will be in touch and Michael goes home to his family. Trevor (played by Rossif Sutherland) and Lily (played by Rachel Wilson) tell him he will get the job because its in his blood.

Meanwhile, Pasha (played by Ben Kingsley), a head diplomat is reviewing the candidates for the position. He lands upon the picture and resume of Michael Sullivan and decides that he will do. Soon, Michael learns that he has landed the position of Special Assistant to the Under Secretary General. Specifically, he will be working on the Oil for Food program. The Oil for Food program relates to the sale of Iraqi Oil to provide basic necessities such as food and prescription drugs to the poor citizens of Iraq.

So, in a sense Michael has landed his dream job. Upon his first day at arriving at the United Nations for work, he is asked to summarize the program for the following day and give Pasha everything he needs to present to the United Nations for their review. Later on that night while grocery shopping, Michael is stopped by a man named Justin Cutter (played by Aidan Devine) who is looking to Michael to be the eyes and ears of what’s going on inside. He leaves his card.

The next day, Michael presents his summary to Pasha while pointing out that there does appear to be kickbacks and corruption throughout the program. Pasha promptly shreds that part of the document and tells him that he needs to play by the rules. The document needs to show the greater good of the program not its downfalls which other diplomats will capitalize on and shut down the program.

Then its off to Baghdad for Michael and Pasha as they meet with Madame Dupre (played by Jacqueline Bisset) who is determined to expose the corruption and shut down the program. As soon as Michael gets off the plane, he starts to see the corruption which includes things such as expired pills and certain parts of the country not getting the food that they desperately need. This is also when he gets introduced to a lady named Nashim (played by Belçim Bilgin). But with danger at all angles and his life and job at risk, can Michael expose the corruption or will he just become another pawn that will be moved around at will?

Of course, the rest of the story involves Michael deciding what to do with this information around him. But since the first frame is him showing up at the Wall Street Journal, we already know how it ends. (It’s not like he showed up at the doorstep because his subscription to the newspaper was running out) Anyway, I also noticed that the casting of this film was quite decent. We had Ben Kingsley and Jacqueline Bisset who brought the class and demeanor to the film to put it in the right mood. Theo James, I had enjoyed from the Underworld series and Belçim Bilgin seems to be a fine and upcoming actress. In addition, the rest of the cast was an assortment of those who had filmed these type of movies before.

That alone should have made for a great movie. But what we got was really standard CIA/Diplomat/Foreign Relations type of film. Everything operates in a shade of gray. Everybody is going to backstab each other to some degree. You have to work within the system kid! Excuse me while I take a drag off my cigarette and sip some scotch. The point is (without cursing too much), this movie’s fault is not within the actors and actresses but in the writing where doesn’t hold any real surprises. The action (I assume because of the low budget) is minimal and it has no bite.

The film is shown in a 2.40:1 Widescreen picture. This film was shot in Morocco, not in Iraq where it would have been way too dangerous. However, one of the achievements of this film is that you would never know the difference. Outside shots are fantastic, even at night where you do get a feel of the environment around you. Colors feel authentic and flesh tones are top notch as you get drawn into the culture of the area. Inside scenes are still very good, but feel a little sparse and not convoluted enough given the landscape.

English audio is provided in DTS-HD Master Audio 5.1. I would put the sound as above average. Dialog is nice and crisp, and the lone explosion did resonate pretty loudly and shake my sub for a few seconds. But the good moments end quickly and then the rest of the time, your audio experience is in the front three speakers. For a foreign diplomat thriller, I was hoping to be drawn more in by my ears to the environment. Subtitles are provided in English SDH and Spanish.

Automatic Trailers : Lady Bird, The Florida Project, The Disaster Artist, The Killing of a Sacred Deer, and The Vanishing of Sydney Hall.

The Truth Behind Backstabbing for Beginners 8:12: 6 Years ago (well more like 9 years ago now), Michael Soussan wrote the book Backstabbing for Beginners: My Crash Course in International Diplomacy. One would hope that this featurette went more into that. Instead what we get is director Per Fly talking about the movie for 8 minutes with the usual assortment of clips thrown in. He explains how he believes everybody operates in shades of grey. He lists inspirations for the movie such as Syriana and the Constant Gardner. Per (or is that Mr. Fly?) goes into the casting and how they finally settled on Morocco/Casablanca.

Note: Included in the package is an UV Digital Code (not compatible with Movies Anywhere since Lionsgate is not part of that program). Redeemable through Vudu and other UV Vendors.

The major complaint as with any film that’s based on a book is how close it follows the source material. This film is very very loosely based on the book, aka the true story. It’s meant to be an entertainment piece. It goes from start to finish with a few predictable twists and turns with some action and even a little romance. Ben Kingsley holds up the film by cursing as much as he can and remains the only true highlight.

The disc package features some nice video of Morocco and above average audio which includes some nice gunshots and an explosion. Unfortunately there is only one extra and a smattering of trailers to enjoy after you are done with the movie. It might be best served to go seek out the book which can be had for under $10 used on Amazon for what the experience was really like to be a foreign diplomat. I would recommend this film as a rental for couples without kids, maybe after you are forced to watch Notebook for the 14th time. Enjoy.

Michael Durr has been reviewing movies for the better part of fifteen years now. He primarily enjoys thrillers, sci-fi, animation and even a little courtroom drama. His favorite films include Escape from New York, the Goonies and anything with Alyssa Milano. When he’s not praising Kurt Russell as the greatest actor of our time or scratching his head over a David Lynch flick, he’s spending time at home in Texas with his lovely wife, Lori and his amazing son. How they put up with him is a mystery, but even Basil Rathbone doesn’t have the time to solve that one.
The Avengers: Infinity War Den of Thieves (Blu-ray)