Pirates of the Caribbean – The Curse of the Black Pearl

Posted in: Disc Reviews by Archive Authors on December 11th, 2003

Based on a ride at Disneyland, you probably would not have expected much except for the fact that you have Johnny Depp and Geoffrey Rush cast as the leads. The Black Pearl is a mysterious pirate ship half old-wives-tale half ghost story. Geoffery Rush plays Captain Barbossa the captain of the Black Pearl he sails the seas in search of every last piece of cursed Aztec gold to try and free himself and his mates. Johnny Depp plays the roguish Captain Jack Sparrow (the acting for this part was based on Keith Richards) on…e captain of the Black Pearl and trying to find his ship and get it back. Add to the mix Keira Knightley as the kidnapped daughter of a governor and Orlando Bloom as the son of a long lost pirate and you are ready for a rousing good time on the high seas. The story is pretty straight forward, the acting is great and the film looks fantastic all adding up to one of the best popcorn flicks in a long time. 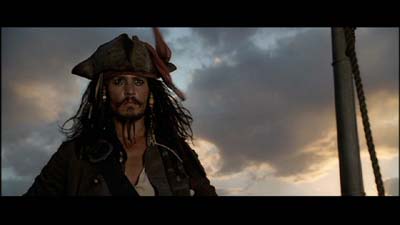 You just know when you flip a case over to read the specs and it says THX certified, DTS and Dolby Digital and produced by Jerry Bruckheimer that the audio is going to rock. The rears are used very heavily and to great effect, especially during the battle scenes on the Black Pearl. Swords and skeletons swirl around you with pin point imaging and full sound. During one of the sea battles scenes we have two ships firing canons at each other from either side of the screen, bass pounds with every canon blast and bullets seem to almost whiz over head. Voices are clear and intelligible, which is good as we try and decipher Cap’n Jacks drunken’ accent, this disc sounds flat out awesome. 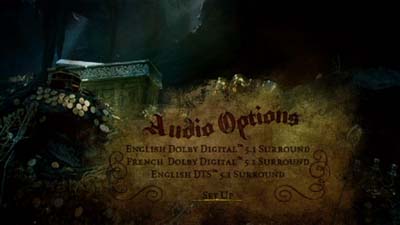 Like the audio the 2.35:1 transfer of this film is flawless. With lots of dark night scenes that show off good rich blacks and great shadow detail to bright punchy daylight scenes, this disc looks as good as it sounds. The sailing scenes show off the rich deep blue of the Caribbean ocean and the bright colors of Captain Jack’s crew. There is no film debris or grit and no noticeable edge enhancement. The work of CGI involving the cursed crew of the Black Pearl looks very good as well and only looks slightly off in a couple of small shots. Overall though this is without a doubt one of the best looking discs this year. 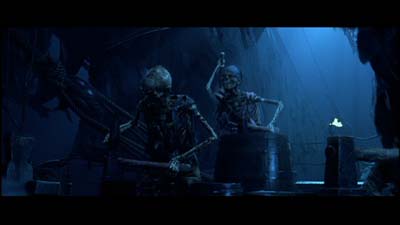 The two disc set of this film is packed full of extras and makes this one of the best values for a DVD this year. Disc One starts out with three separate audio commentaries, first with director Gore Verbinksi and lead Johnny Depp, next with producer Jerry Bruckheimer, actress Kiera Knightley and Jack Davenport (one of the pirates), and lastly with Ted Elliot, Terry Rossio, Stuart Beattie and Jay Wolpert (the writers). The best of these commentaries is Johnny Depp and Gore Verbinski as we listen to Johnny talk about the inspiration behind his character. Next for disc one we have two DVD-Rom extras, the first of these allows you to watch the film and follow along with the script, very cool. You can also watch the film as you follow along with the storyboards, this has been done before but is very well executed here. 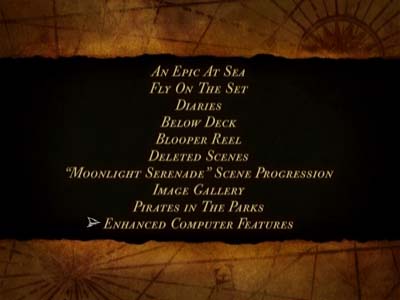 Disc Two breaks down into seven different areas, the first of which is An Epic at Sea where we look at The Actors, The Locations, Production Design, The Ships, Make-up and Wardrobe, Stunts and Swords, Visual Effects and The Premiere. Probably the best part of these extras is seeing just how big of a production this film really was, whether it be the amount of work that went into building the ships or finding the locations and the issues with looking after a film crew out on the ocean.

The next section features three video diaries the first is from Producer Jerry Bruckheimer that also includes some of the photographers that he took on the set. Next is Jack Davenport (he plays one of the pirates) with an inside video diary which is pretty cool. Lastly we follow the journey of the one real ship that was used in the film as it sails from Los Angeles down to the Caribbean islands.

Continuing with the video diary idea we have the Fly on the Set section which follows the production through five different parts of the production and is simply random footage without commentary. The different sections are the Town Attack, Blacksmith Shop, Tortuba, The Cave and Jack’s Hanging.

Next up is the Blooper Reel (some pretty funny stuff here) and 19 Deleted and alternate scenes. The blooper reel is pretty good I found the deleted scenes get a little tiresome as there are obvious reasons they are not in the film.

Moving onto the Moonlight Serenade: Scene Progression where we get to watch how a scene with fairly heavy amounts of CGI is put together.

The last three sections are all interactive content the first of which is entitled Below Deck: An Interactive History of Pirates. While exploring a pirate ship you can watch short clips with historians about pirate lore and legend and discover what life on a pirate ship was really like. Then we have a number of Photo Galleries that takes us from Inspiration and Conception art all the way to publicity with photos and storyboards. Lastly there is a featurette on the history of The Pirates of the Caribbean Ride where we see the inspiration behind the ride and discover just how revolutionary it was for its time, it is also very interesting to see how the film ties in certain scenes from the ride.

Last but not least we have the DVD-Rom extras for disc two, these come in four parts. The first of which is the Moonlight Becomes Ye:Effects gallery where you can turn a photo of yourself our you loved ones into cursed pirates. Then we have an interactive Quicktime VR tour of the ride from Disneyland. Next up is a second featurette on the history of the ride and lastly a photo gallery of the production art and the attraction itself.

This disc film is loaded with awesome extras that we entertain for hours and is one of the first discs I can think up where the DVD-Rom content is worthwhile.

The menus are all scored and animated as are the transitions from one menu to another. The case for the film is the 2 disc Amray keepcase with a protective sleeve for the whole package that looks fantastic.

This is a great film packed with everything you could want to see, it has action and adventure, comedy and romance. Add in what is arguably the best extras package for a film this year and I don’t know how you can resist being an owner. Oh, I almost forgot about the reference quality transfer and an audio track that will rock the house and this is a must own.

Beast From 20,000 Fathoms Grabbed By The Ghoulies (Xbox)