Posted in: Disc Reviews by Archive Authors on September 1st, 2004 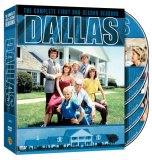 Fans of The O.C., Melrose Place and even 90210 should take note. The original is back. That’s right, the 80’s favorite Dallas is making a comeback on DVD. This new five disc set features the complete first and second seasons of the show that made America (and even much of the world) stand up and ask the all-important question, “Who shot J.R.?”

A mysterious grin crept across my face when I saw that I would be reviewing this title. Would it be as good now as it was then? Was all of…the original hype justified? Would Patrick Duffy still have a bad haircut? The answer to all of these questions is an unequivocal “yes”! No other show has succeeded in capturing the lifestyles of the rural millionaire better than Dallas. This is a program that has played as important of a role in shaping America’s view of a modern Texas as George Stevens’ Giant did so many years earlier.

Fittingly, this boxed set is nothing short of Texas sized. These double-sided discs contain 29 commercial-free episodes. That’s a little over 23 hours of oil baron content, not including the extras. This is an excellent way to introduce new fans to the show, or to re-live the action for those long time fans. This is a set that would make J.R. proud.

Unfortunately, for all of the campy fun that this show brings, the technical aspects of the discs just don’t live up to my expectations. It is quite understandable that the audio would be a Mono mix, since that was the original format of the show. However, it is disappointing that the audio is so flat and tinny. I was hoping that some re-mastering would be done to clean up these tracks, but that doesn’t appear to be the case. The dialog is mostly clear, but the music and sound effects are severely underwhelming. There is no punch to the bland track, and what few bass tones do exist are muffled ones. This show doesn’t sound any better on my home theater than it did coming from my family’s mono console television speaker so many years ago.

If the audio is bad, the video is worse. All manner of blemishes are present in these shows, including dust, scratches, and whole chunks of film missing from the source material. Another annoying problem is the existence of some severe flicker that shows up from time to time. Some scenes appear to be lit by strobe, especially when there are lighter colors on the screen. Colors also streak on occasion.

Speaking of colors… there aren’t any. I mean, the show is in color, but the colors are faded and washed out. I am sure this will become less and less of a problem in later seasons, but these early ones are extremely bland, with the popular brown tones of the day overwhelming the screen.

I will say, however, that as bad as the picture is, it does add a certain nostalgic charm to the program. I would greatly prefer a re-mastered transfer, but it really takes me back to see how bad the quality was on broadcast television in the late 70’s and early 80’s. The show is a bit camp and a bit quality. This transfer mirrors that spirit.

Often times, DVD sets such as this one come with no extras whatsoever, so the inclusion of any special features at all is worth mentioning. The back of the box states that the collection comes with cast and crew commentary on select episodes. While this is true, be forewarned that by “select episodes”, they mean three. These are not groundbreaking tracks, but they aren’t snooze-fests, either. In fact, they turned out to be just as I expected them to be. Cast Members Larry Hagman and Charlene Tilton spend most of their time wistfully reminiscing about the good old days of working on the show, while show creator David Jacobs provides more of the technical information about the productions.

Also included is a 44-minute Dallas Reunion Special that was produced by Soapnet. As far as pre-existing extras go, this one is really not that bad. Unfortunately, the show is set up in a “Live with Regis and Kelly” format, complete with unnecessary barstools and two brain-dead hosts. The cast is interesting, though, and if you can get past the horrible hosts, there is some decent content here.

If you were a fan of this show during its initial run, you can pick this up with ease. It is just as fun now as it was then. However, be forewarned that the picture and the sound quality haven’t gotten any better over the years. If you are looking for improvements in those areas, you will be sorely mistaken. Buy for my money, when it comes to evening soap opera-style dramas, you simply can’t beat Dallas.