Posted in: Disc Reviews by Archive Authors on June 21st, 2005

Only could Matt Stone and Trey Parker, the (gulp) geniuses behind South Park, could come up such a wildly crazy (and funny) film such as Team America: World Police. What is so wild about this film you ask? Well, the actors are marionette puppets, every other word is an f-sharp, and almost every big Hollywood actor is portrayed negatively. And what is wrong with this? Absolutely nothing. This film will not be for everyone, but for the loyal fans of South Park, this film is pure bliss. Not o…ly do you get the vulgarity that Parker & Stone are known for, you get it stepped up 10 notches. Who would have thought that puppets could be so entertaining?

There are so many funny, off-the-wall elements/scenes that are brought to light in this film, but here my favorites…

This disc sports a very impressive 2.35:1 anamorphic widescreen transfer. The colors are vibrant and as natural as marionette will allow. The contrast is quite sharp, with good black levels, but a few overly contrasted reds were noticed. There are very few mild grain issues, but not enough to really complain about or distract from the image. As for digital artifacts, this disc comes across clean and impressive.

The Dolby Digital 5.1 audio track provided with this disc is on par with the video transfer. The action sequences are nice and loud, with good power from the front channels, and active use of the surrounds for effects. The soundstage is full, involving the listener marionette in the viewing experience. The dialog is clean, the LFE is powerful at times, and the sound separation is good. This is not the best sounding audio track , but it sure is good for this film.

This disc is crammed with a number of extras. There are four main featurettes that do a good job of showing how the film was created…

There are also a number of smaller extras that are included on this disc. There is a Team America: An Introduction (5:05), a short (4:48) Miniature Pyrotechnics feature that shows Joe Viskocil blow stuff up, a design featurette (5:07) entitled Up Close with Kim Jong Il, dry run tests entitled Dressing Room Test (2:02) & Puppet Test (4:08), 10 Deleted/Extended Scenes & Outtakes, Animated Storyboards (12:30), and lastly, a collection of Trailers.

Will this DVD offend some viewers? The answer is a resounding yes. Will most viewers get a kick out of this over-the-top film? This answer is also a resounding yes. While not for everyone, Team America – World Police is a wild and raunchy ride that will please the fan base of Matt Stone and trey Parker. This disc provides good quality audio and video, and includes a good amount of supplemental material to keep you busy for a while. 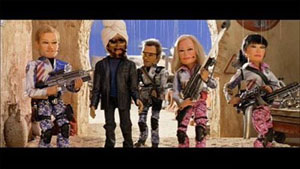 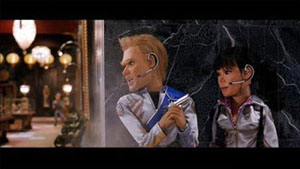 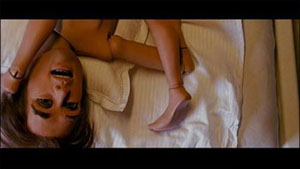