Posted in: Dare to Play the Game, News and Opinions by Michael Durr on April 16th, 2008

Does Free Play Mmo’s Work?, The Crue on Rockband, and Developing Gaming Skills? – Welcome to the column that developed many childhood skills like reading, riting, and rithemthic but not until they were fifteen known as Dare to Play the Game.

Welcome to another edition of Dare to Play the Game. 36 & 19. That’s all I should have to post at this point. You know how I roll. My main, the Troll Rogue spent most of the week in Thousand Needles, mining until his little blue hands turned purple (or would that be black, I’m not sure). . He’s well into Mithril now and a mining skill over 200. Blacksmithing is kinda steady, hitting the 190 range. The Dwarf Priest, well he received some what of a blow this weekend trying to help others in Dead Mines. Grouped with 4 others and I did a great job of healing up until the last boss, Edwin Van Cleef. I was aggrohealing all over the place it seemed and not able to get any good communication going (I blame myself as much as I blame others). So needless to say, we died…a lot. Three times until we got it right. Probably didn’t help it was 1 in the morning either. I got jack from the instance except for the experience both numerical and practical. Hopefully, I can improve my skills in future endeavors.

Min Kim, Nexon America’s director of game operations, sat down with Gamasutra to talk about the free to play model, Nexon’s expansion to the 360 and the DS. On the issue of people dismissing the business model:


I don’t want to discount people, but I don’t think they’re doing all the right research, because I see all the misconceptions that people have about what our business is. If they’re going to ask the right questions, we could probably tell them.

Or if they would just go in and experience our games. A lot of people talk about it like, “Hey, this can’t work,” or “It doesn’t have the right balance,” and then when I ask them questions like, “Have you played it or seen it?” they’re like, “No, but it’s like this!” and I’m like… (laughs)


I think the misunderstandings and dismissals are a fact of life in regards to the free to play model, with Kim arguing that people don’t really understand what it takes to make it work. It’s an interesting interview on a gaming model that is becoming more and more popular (and plenty of other stuff besides).

The free to play model sounds counter-intuitive to every capitalist out there. What, I’m not supposed to make money off of this? But in reality, it can work. Sure, it takes some secure financial backing; because you are going to lose some money at first. Free doesn’t mean it magically covers your expenses. However, the theory is that the games start to gain popularity and then from that popularity….people and sponsors start catching on. When those two elements catch on, what does that mean? Money! From advertising to getting people to want to see better versions of what they already experienced. But it’s a little thing called faith which keeps people from doing it. Good freeware (Open Office comes to mind) and Shareware also has similar concepts. If somebody would wake up, consoles could also have this, albeit in small doses and it might just work too.

Can’t let the competition get one up on you! After Def Leppard announced last week that one of their new songs will be debuting in Guitar Hero III, Mötley Crüe have today been wheeled out by the Rock Band camp, with news that their latest single, “Saints of Los Angeles”, will be premiering not on the radio or TV but as a piece of Rock Band DLC. I’m trying to get excited over this, but really, wheeling out new stuff from these decaying old bands really doesn’t do it for me. I want “Kickstart my Heart”, not some new, inevitably-rubbish song.

Cool and smart concept. Motley Crue’s audience (not just me and that guy playing air guitar in the Guitar Rock 80’s compilation cd commercials) probably are quite familiar with Rockband. We even buy DLC songs every once in a while. This gets the song out in the open to more of their general audience than some random cd in a store. Then they release the CD and they get better sales. Makes a lot of sense. I hold onto some small hope that besides Saints, they also release more MC material like “Dr Feelgood”, “Same Ol Situation”, “Girls, Girls, Girls”, “Shout at the Devil”, “Primal Scream”, etc. Actually they could release the whole Dr Feelgood album and it would be a purchase for me day one. The best part of the Saints single is the 80 point pricetag. Schwing!, I will be downloading this later in the week. (Hopefully I can actually learn to sing it as well)

Brandon Erickson at Gamecritics puts forth an interesting question. Is there a “critical period” in children for learning video game skills, the same as there is for language? It doesn’t preclude the learning of languages, or the innate hand-eye coordination specific to video games, later in life, but it may explain why younger kids who grow up using controllers second nature will, depending on the game, always whip the ass of an adult who learned on that stupid Colecovision phone-looking thing.

Using Super Smash Bros. Brawl as an example, Brandon tells us his brother, with little current gaming experience, utterly thrashed him. On a more complex game like Call of Duty 4, Brandon had the upper hand.


This makes me wonder if gaming skill operates similarly to language acquisition. Maybe my brother’s early-life exposure to previous Smash Bros. games gives him a built-in advantage that my practice will never overcome. It could be that after age 12 our brains can’t instinctively master certain gameplay styles that we weren’t previously exposed to, hence my suckiness at newer fighting games. I’m not saying older people can’t master new gameplay styles, but rather that there might be a developmental cutoff after which achieving such mastery becomes much harder.


That’s a pretty good question, and I’m disappointed I didn’t think of it first. So I’m linking to it. I’d like to think this hypothesis could be supported by child development experts, if only to level the competitive imbalance with my father, who is 58 and can still kick my ass in driveway hoops. (Thanks for teaching me a jump shot during that “critical period,” Pops.)

I agree with this article whole heartedly. Gaming skills are much like foreign languages. When you are younger, you are more open to learning things. Somewhere around 18-22, our mind shuts off from learning. Not completely, but things take much harder hold to set in. My skill in gaming is rpgs and sports. There hasn’t been a wrestling or a baseball game I can’t beat and most rpgs before the PS2 became big were beat in a mere week or so. I suck at first person shooters. I admit it. I’ll play Rainbow Six or Halo or insert FPS of the moment here, but I struggle at it; consistently. I keep trying and sometimes I’ll come away with a minor victory of sorts. Why is this though? I didn’t touch my first FPS until I was already in college. Wolfeinstein 3d. Followed by Blake Stone, Doom, Duke Nukem 3d, Quake, Heretic and so forth. I’m not bad at those, but the next wave of FPS games (started with the first Halo I reckon and beyond), I missed for a reason I forget right now. Probably the whole career thing and lack of money. So as a result, little time means my butt gets fragged on a regular basis. Though I can still suplex most of your candy asses through a table on any given day of the week. 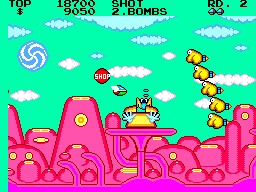 More classic sega master gameplay. Makes my little heart warm up in joy. You have a ship named Opa-Opa and you shoot all of these cute little spaceships in an attempt to protect the planet(no real story). Weapon upgrades are retrieved with money and a red balloon with the word “Shop” on it. It is a classic horizontal shooter but the color array of pastels and fantasy style set it apart from other similar shooters of the era. For shooter fans, worth the purchase and cheap Wii points expenditure. 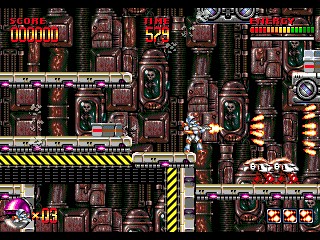 Well we had Super Turrican a few weeks ago, I guess we needed yet another Turrican game to come out. Did I mention I have the original Turrican for Genesis on my auction pile? Just wanted to point that out (taking all offers including other games, books, cds and promises to meet Morgan Webb). More Dark Forces have assembled and guess what you have to beat them once again. (You would think they would hire a task force to take care of the dark forces). The graphics are slightly improved but in all reality, it’s the same Turrican experience you have come to enjoy. If you got the Super and liked it, then this is probably right up your alley.

I went retro this week, you heard me right. I busted out the Super Nintendo. I just wasn’t feeling it with my 360 this week (outside of a few rounds of Texas Hold ‘Em). I went through my collection to see what I needed to play and noticed a few things missing. One, I don’t own a copy of Zelda: Link to the Past. Two, I don’t own a copy of Super Metroid. I solved the first one. I received it last night. Inserted the cartridge and complete bliss. I played it for maybe 15 minutes (I had to get prepared for a trip today), but I know I will go back to it pretty soon. I also bought Legend of the Mystical Ninja off Ebay. I would say that by the end of April, I will have at least bought Super Metroid. I already have a few titles, the Super Mario All-Stars, Donkey Kong Country, Killer Instinct, Lufia, and a few others I can’t think of right now that are relevant. I don’t have any plans to get the Final Fantasy carts, mainly cause they are too expensive when I have all of them redone of the first Playstation anyway. Even though I seem like a collector sometimes, I really am at the soul, a player. I’m not trying to get a complete with manual copy of Zelda: Link to the Past. Sure I want the cart in good condition and a working battery, but I want to savor the game and do what was meant to be done with it, play it. Play it on an old 27 inch tv and listen to the 16 bit sounds. Not collecting dust in a drawer or bin like some heirloom forgotten by time. Break out an old console this week, NES, SNES, Genesis, heck the Commodre 64 if you got one. Play your favorite game or one you’ve only heard about. Enjoy kiddoes, I’ll be back next week.

Michael Durr has been reviewing movies for the better part of fifteen years now. He primarily enjoys thrillers, sci-fi, animation and even a little courtroom drama. His favorite films include Escape from New York, the Goonies and anything with Alyssa Milano. When he’s not praising Kurt Russell as the greatest actor of our time or scratching his head over a David Lynch flick, he’s spending time at home in Texas with his lovely wife, Lori and his amazing son. How they put up with him is a mystery, but even Basil Rathbone doesn’t have the time to solve that one.
Conspiracy Feel the Noise