Posted in: Dare to Play the Game, News and Opinions by Michael Durr on January 7th, 2009

Most Played over Xbox Live, Lego Rock Band & Illinois Senate hates alcohol? – Welcome to the column that would be rich if it had a nickel for every bad gaming idea to be made this year known as Dare to Play the Game.

I am currently not playing Fable II, I know you are in shock. So since my time in WoW is limited on purpose; what exactly am I playing? Believe it or not, Lego Star Wars CS and Burnout Revenge. Not Paradise, the older one. The one before they opened it up and tried making it a sandbox game. By the way, achievements are hard as heck in Burnout Revenge. But I did get a couple since I picked it back up. I still have the same problem with the game though. I can never gold star any of the Burning Laps. Races, Road Rage, Traffic Attacks, Crashes, Eliminators, & Grand Prix are not that big of a deal. But any of the so called Burning Laps or Preview Races where I’m trying to finish in a certain time, I’m just not cutting it. Even on the Harmless Ranking.

The majority of my time is spent in Lego Star Wars though. I still have had more fun with Lego Batman (in large part since Sarah played it with me) but it is holding my interest. The first episode is complete and an assortment of characters have been bought. The two best so far? Darth Maul & Indiana Jones. The character I hate using the most but actually way useful? Jar Jar. I do find the sheer number of characters available to be the most impressive thing about this game so far. This game will be in my console for a long time to come though I’ve already been watching auctions for Lego Indiana Jones. I sometimes wonder how old I really am.

Lists like this fascinate me. Mainly because I am one of those stat geeks who are obsessed with numbers on subjects that interest me. Top of the list: Baseball and Video Game stats. Anyhow, the first 4 of the full game list come as no surprise. I do find it interesting that Guitar Hero 3 beat out Rock Band by a few places. However, there is no Guitar Hero World Tour in sight. Fable II had a respectable showing as did Battlefield: Bad Company. Heck, the demo for BF did better than the full game. Most likely cause it was free. I find it funny that both Star Wars Force Unleashed and Mirror’s Edge demos were on the list but the full games were not. Both were a result of heavy anticipation and not delivering enough in the end product. Mirror’s Edge also probably led to an increase in the sales of Excedrin. Sixteen for Rainbow Six Vegas 2 is a little disappointing since the first one did much better business. Count for # played out of top 20? 7.

The top 20 Xbox Live Arcade holds for me a little more interest. Certain props goes to Castle Crashers which remains probably the #1 XBLA title that I do not own but want to. Some old entries sticking in the top 20 like Worms, Uno and UMK 3 are most welcome. I’m not sure how Geometry Wars 2 got #2 but I know it has its fans. Here is my question. How does Castle Crashers finish #1 and Uno #5 but in the previous list, Uno is #16 and Castle Crashers is #17? Am I missing something? Or does this list also take into consideration trial copies? Trials tried out of top 20? 14. Full purchases out of top 20? 7.

The final list is the Xbox titles that won’t go away list. The staying power of some of these is amazing and it is nice to see these still being counted even if the original consoles will soon only be found on Ebay. (Gamestop will stop taking Xbox consoles in early February). Halo 2 will still get plays ten years from now as will CounterStrike. I wonder if the Fable:LC + Fable count equals Halo 2. Probably not. Surprises are plentiful here with Conker getting quite a high rating. Also, what is with all of the Star Wars? Four spots in the top eleven. Games owned out of top 20? 7. Wait, so I’ve played 7 of the top 20 Xbox 360, own 7 of the top 20 XBLA, and own 7 of the top 20 Xbox originals? Kinda of a cool stat in of itself.

A “source” has told VG247 that Traveller’s Tales’ next LEGO game won’t be Star Wars. Won’t be Indiana Jones, either. Won’t be Robocop, won’t be Predator, won’t be Halo. It’ll be LEGO Rock Band.

Seems the rumour stems from an interview on Britain’s Radio One last night, in which TT swore a new LEGO game would be out this year. Despite earlier indications their next game would be a LEGO Harry Potter, VG’s source – who claims to be “100 percent correct” – has instead made the Rock Band call.

Seems like an absolute waste of the LEGO name, not to mention a pointless overcrowding of the Rock Band “genre”, but hey, crazier, stupider things have happened in this business.

At first, like most I thought this was a stupid idea. Then I thought about it for ten more minutes, it’s an even worse idea. However, in those ten minutes I realized what Traveller’s Tale is really doing. Okay, it is more like hope. They are floating an idea out there and once they see everybody is putting up a stink about it, they will kill it with a quickness. I’m just hoping they aren’t that senseless. Lego Harry Potter would be guaranteed money. Put me down for a copy. Also a Lego DC Universe would be a winner in my book. Actually I could probably come up with a 100 other things I would rather see in Lego before they even thought of Rock Band. Heck, Lego Boogie Nights would more of a money maker. You might laugh but for the rest of the night you will be thinking about Dirk Diggler’s most noticeable feature as a Lego piece.

Alcopops are a huge concern for fear-addled parents, because they’re sweet, alcoholic, and a gateway drug to total douche behavior. So Illinois is taking a courageous stand by banning alcopop ads from video games.

That’s right, Illinois, home of Senate seat firesales and previously abortive (and unconstitutional) efforts to regulate game content, made sure that in a raft of anti-drinking measures, no E- or T-rated game sold in the state may include any advertisement for Mike’s Hard Lemonade, Smirnoff Ice, Hooper’s Hooch, et cetera. Because it was just rampant up to now.

Video games aren’t singled out; in Illinois, you can’t market these things at live performances or concerts “where the intended audience is primarily children” either. Tough shit, Jonas Brothers!

Still, I’m wondering if this will be challenged simply because of it’s another asinine precedent, not because Mortal Kombat vs DCU needs a thirsty Sub Zero to pound a Bacardi Breezer after a fatality. On the other hand, you could look on it as Illinois keeping what would surely be a most obnoxious in-game advert out of our consoles.

Anyway, there you go. Alcopops in video games is added to the list of shit everyone should fear. But if we’re now passing laws against fictitious threats that are more retarded than sinister, then for consistency’s sake Illinois should outlaw Gargamel and Skeletor, too.

I happen to live in Texas but I thank god weekly for the fact I do not live in Illinois or Ar-kan-saw or Michigan or Alaska. I’m not a big fan of ultra cold weather. Anyhow, I really don’t understand how any Illinoisans don’t just revolt and set up a new government. They have a corrupt governor, their senator that was to replace Obama was denied entry into the Senate and they think up asinine laws such as this one. Way to go Illinois. However, now I have the feeling of wanting something I can’t have. Fatalities based around alcohol, what a glorious concept. Scorpion should be downing Goldschlagger Cinnamon Schnapps and delivering up a toasty while doing it. Sub Zero’s drink of choice? A Pina Colada. Reptile? Sour Apple Pucker. Truth is perhaps that Illinois might consider having a government that doesn’t resemble a laughing stock before they start making sweeping laws that have no impact on current culture. 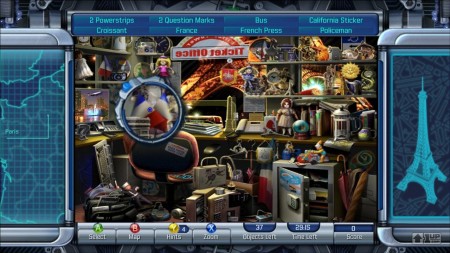 A new year and we get an odd casual title to start it off in XBLA. This is a puzzle game where players travel the world and examine ridiculously cluttered crime scenes for intricate clues to the whereabouts of Dr. Chaos. I’ve heard this one is compared to Millionheir on the DS. This will be packed with mini-games and have 4-player online co-op for those who want to assemble their own little CSI unit. This could be a fun adventure for those who are interested in the genre. Does anybody else miss the days of Carmen Sandiego? I’m probably the only one who watched the game show and the cartoon show. 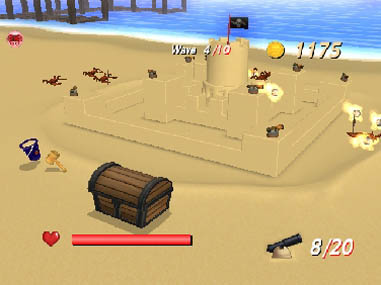 To be brief, I expect better from Konami. This game lets you build elaborate sand castles. But that’s not all, you can also enter into a battle with invading crabs in Crab Battle mode. The sand castle must be built properly to withstand such an attack. Thankfully you have cannons at your disposal. *snore* You can also go along the beach to find more treasures to decorate the sand castle with. Question…what is the supposed age group for 90% of WiiWare games? 3-5? Thank goodness for VC. 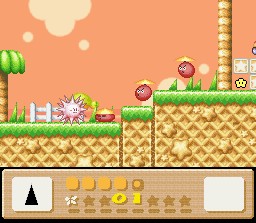 This is Kirby, you know the drill. He must again save the day when King Dedede causes trouble. There are new levels & new enemies. So that means only one thing, Kirby must swallow them and gain their new special attacks. He can also unite with some of his animal friends to get super special attacks. Chances are if you liked 1 and 2, you’ll go for three as well.

WoW time. 60/58/43/32/18. The only thing that was done this week was taking my hunter to Thousand Needles where I leveled a couple of times easily. I think I’m at a point with WoW where I’m just playing it to pass time. This isn’t a terrible thing but when you are paying for two accounts at $15 a month, it does leave your mind to wonder what else could be done with that money. I certainly don’t want to delete the characters but perhaps taking a few months off wouldn’t be a bad idea. There are plenty of 360, PS2, and Xbox games in my library for me to try out if nothing else. I will always be a gamer, no matter what. Heck, my hands could be cut off and I would be still searching for a way to hold a controller. However, my choice of gaming does shift and I sense that shift is coming back to the console. That or I could always pick back up Guild Wars again, that is if I could remember my password. Have fun kiddoes no matter what game you pick up.

Michael Durr has been reviewing movies for the better part of fifteen years now. He primarily enjoys thrillers, sci-fi, animation and even a little courtroom drama. His favorite films include Escape from New York, the Goonies and anything with Alyssa Milano. When he’s not praising Kurt Russell as the greatest actor of our time or scratching his head over a David Lynch flick, he’s spending time at home in Texas with his lovely wife, Lori and his amazing son. How they put up with him is a mystery, but even Basil Rathbone doesn’t have the time to solve that one.
Ghost Town (Blu-ray) Ring of Death