Posted in: Disc Reviews by Michael Durr on January 7th, 2009

Every director has a style. Sometimes it can be a deliberate style, sometimes it can be more subtle. I received the movie Ring of Death and was a little worried since I had my fill of bad prison movies. After watching the movie, it seemed familiar but I couldn’t place why. The director’s name on the back was Bradford May. To most people, that probably does not ring a bell. To me, it was a different story: he was the director of Darkman 2 and Darkman 3. Then everything from that point became clear.

Burke Wyatt (played by Johnny Messner) is your average out of work cop. He has a loving but somewhat distrustful wife in Mary Wyatt (played by Charlotte Ross) and a son that he doesn’t get to hang out with enough in Tommy Wyatt (played by Uriah Shelton). However, Burke’s life is about to change when his former partner Steve James (played by Derek Webster) offers him an undercover gig to investigate a string of prison murders at the Cainesville State prison. The reward is simple: a large trust fund for his son and a full time job for Burke at the FBI.

The real story is that the Warden Golan (played by Stacy Keach)is holding an illegal fighting ring inside the prison and showing it off to spectators and bidders on the internet with help from an entrepreneur named Wheaton (played by Sam McMurray). The main attraction is a man simply called “The President” (played by Lester “Rasta” Speight) who fights for the sheer pleasure of usually killing his opponents. After Burke is set up so that he can enter the prison as an inmate, he starts to realize the world he has entered has only one set of rules: the Warden’s. Can he get the evidence the FBI needs and can Burke Wyatt survive against the brutal odds of “the cage”?

The last time I reviewed a prison movie, the results were let’s just say not pretty. It was a train wreck from start to finish and my head hurt, a lot. Things were happily different with Ring of Death. The hero of the story played by Johnny Messner is a bad ass, plain and simple. He isn’t weak and he has confidence oozing out of him. You know what he is going to do and there are no questions about the situation. The supporting actors and actresses also handle their roles adequately. Stacey Keach does a fantastic job of putting himself over as the absolutely psychotic Warden. Sam McMurray does a good job as Wheaton who gets the envious job of walking around a mansion for half the movie filled with naked women. How do you get an acting gig like that?

By the way, you heard me right. Naked women in a prison movie. Take note all of you prison movie directors who feel compelled to show two guys where one is crying and the other is grunting like he belongs in hardcore porn. Nobody wants to see that. Thankfully, Ring of Death provides absolutely none of this. There are awesome fights, lots of blood and women who are extremely easy on the eyes. My only two complaints with this movie is that first it seems almost too simple for Burke to walk in there and take charge. He comes in, hardly gets roughed up and the ending is never in question. The second is that while Charlotte Ross does a good job as Mary, she needed to be a stronger woman. This might have been the writing’s fault, but she constantly appears throughout the film as very weak and frail. Mary should have been angrier than heck when her husband went to jail, either at him (most logical choice) or at his former partner. Instead, she seems to accept most things and simply goes to the next scene.

Video
The film is presented in 1.78:1 Anamorphic Widescreen. Made for DVD obviously but the production value is actually pretty decent. Colors look good for the whole picture though I have one simple question. What the heck is with Stacey Keach’s eye? I guess that is supposed to simulate a glass eye but it just looks funky. The budget is low but it doesn’t stop this picture from looking like quality.

Audio
The audio is provided in 5.1 English Dolby Digital and is the pretty standard audio mix. Dialog is clear and the action sequences are for the most part pretty loud but not going to alarm the neighbors all that much. No subtitles, but I was able to hear everything as it was intended.

Final Thoughts
Ring of Death is the very definition of a popcorn flic. The good guys comes in, kicks some butt, gets out and nobody watching gets hurt. Heck, you even get some good female flesh to look at from time to time. Sure the acting isn’t going to win any awards but who cares, its fun! Bradford May did a wonderful job here and I could actually recognize his work from his prior outings in the Darkman sequels. Okay, so I am probably the only one who actually liked the Darkman sequels. The disc is decent with good video and audio. The only real disappointment is the lack of extras. I would have killed for a director & Stacey Keach commentary. Heck, throw in Sam McMurray and it would have been golden. As such, I do recommend this disc to those who aren’t too serious in their movie selection as they will find it to be some light-hearted fun. Enjoy. 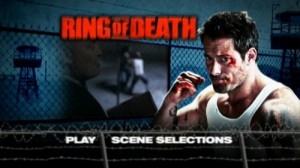 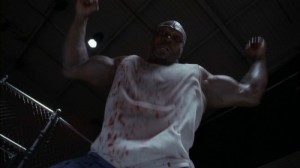 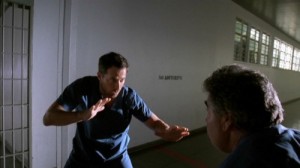 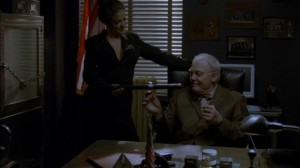 Michael Durr has been reviewing movies for the better part of fifteen years now. He primarily enjoys thrillers, sci-fi, animation and even a little courtroom drama. His favorite films include Escape from New York, the Goonies and anything with Alyssa Milano. When he’s not praising Kurt Russell as the greatest actor of our time or scratching his head over a David Lynch flick, he’s spending time at home in Texas with his lovely wife, Lori and his amazing son. How they put up with him is a mystery, but even Basil Rathbone doesn’t have the time to solve that one.
Dare to Play the Game Comedy Central Roast of Bob Saget: Uncensored