Posted in: Brain Blasters by David Annandale on February 7th, 2009 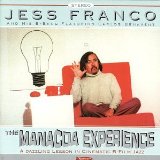 This past weekend, the Goya Awards were handed out. These are Spain’s equivalent to the Oscars. And during those awards, there was a moment that, for followers of mainstream film, must surely portend the End of Days, but which for fans of psychotronic or paracinema is tantamount to the Raputre itself: the lifetime achievement award was presented to Jess Franco.

Check out the YouTube video. There are no subtitles, but a longer version of the clip montage is available as “The Life and Times of Jess Franco,” and it has (somewhat dodgy) subs. Some of the highlights of the Goya footage are as follows. As the montage rolls, the audience is being told:

“During General Franco’s dictatorship in Spain…
… this young actor and filmmaker…
… dared to face up to the strict rules…
… the compulsory religion and the narrow thoughts.
And do you know how?
Running away and shooting abroad!”

Subsequent titles boast: “Six films with Christopher Lee,” “30 years with Lina Romay,” “‘The Most Dangerous Filmmaker in the World’ – The Vatican” and “188 films.” In the interview clip, Franco says, “I don’t think I’ve made good movies. I’ve just made some movies more disgusting than others.”

After the montage, Franco declares that he is not worthy of the award, and, among other remarks, thanks Romay (standing behind him) for having put up with him for 30 years.

So there you go. Take another look at the clip. Doesn’t it make you feel all warm and fuzzy? Aren’t Franco and Romay the most touching older couple? Doesn’t it just tickle you pink to see this showbiz relationship from the people who brought you such wholesome fare as Lady Porno in contrast to the domestic catastrophes that are so regularly the case with far more mainstream celebs? And how about the image that ends the montage and then remains projected over the stage: Franco cheerfully giving one and all the finger. Then there’s the scenes from his films that have just unspooled. “Mature content” doesn’t even begin to cover it. And after that avalanche of unapologetic, committed, determined and aggressive sleaze, cue the standing ovation from the audience. This must surely be the most surreal moment I have ever seen on an awards show.

Two reflections, then. First: can anyone out there imagine such a spectacle on the Oscars? Of course not. Never mind the montage, just consider the recipient of the award. But as the Oscars deal with ever-decreasing audience numbers and cast about frantically for ways to liven up the proceedings (they are promising “surprises” this year – wake me when they happen), I cannot imagine a more surefire way of drawing attention back to the show. Though every last media watchdog would perish of a stroke should all that writhing flesh appear on-screen (and would that be a bad thing?).

Secondly: can the award be read as some kind of mainstream co-opting of the lifelong rebel? Frankly, to the extent that there is any co-opting, I would argue that it’s the other way around. That montage, ending in that middle-finger gesture, plus the mere presence of Franco on stage, is both a reminder of Spain’s repressive past, of a filmmaker who has refused every step of his career to conform (to anything), and is a stark demonstration of how some things have changed, and very much for the better.

Let me end simply. Congratulations to Jess Franco (and to Lina Romay). You’ve more than earned this recognition.

Dare to Play the Game Christopher Titus: Love Is Evol