Posted in: Disc Reviews by Michael Durr on February 23rd, 2010

They say that history is written by the winners. The winners are the ones who fought and the ones who conquered this great land of ours. In reality, history comes from all walks of life, it is unfortunate some are not able to write about it. But once in a while, you find people out there who are able to collect the ideas and tales and weave them into a book. That book will then sell many copies and influence a generation.

Howard Zinn was born in 1922 during the roaring twenties. His youth saw the Depression, the New Deal, and he even participated in World War II as a bombardier. In 1964, he accepted a position at Boston University to teach civil liberties and political science. For many years, he was asked to give advice on finding a history book that was fair and spoke the truth. He didn’t really have an answer until 1980 when he decided to write one.

In 1980, he wrote and published the first edition of A People’s History of the United States. In it he would talk about everything from the struggles of the Native Americans to the civil rights of African-Americans. The book would be a finalist for the National Book Award in 1981 and sell millions of copies. It was followed up in 2004 with a similar book named Voices of a People’s History of the United States. This book collected speeches, articles, poetry and song that reflected or influenced his writing.

One of the issues with these two books is that they are considered very voluminous. Many people desired to put them into a viewable media such as a television series and various specials. After shopping the idea around and gathering a few friends, he decided to film a special performance at the Cutler Majestic Theatre in Boston, Massachusetts. They also filmed certain portions at the Malibu Performing Arts Center in Malibu, California.

For the performance, he and his producers sought out close friends from the entertainment world to speak and dramatically read the speeches and essays from people in Zinn’s written work. People like Matt Damon, Viggo Mortensen, Morgan Freeman, Danny Glover, Jasmine Guy, Rosario Dawson, Josh Brolin, Don cheadle, Sandra Oh & Sean Penn. Matt Damon in particular serves as producer of the show and first came into contact with Zinn’s books in Good Will Hunting.

These actors and actresses read speeches and essays ranging in topics from Slavery to Women’s Rights to Civil Rights to pressing issues of today. The producers also went and found musical talents to perform songs that spoke of the history depicted. Talented artists like John Legend, Allison Moorer, Bob Dylan, P!nk, Eddie Vedder & Bruce Springsteen. For a few hours, they would bring together a history of the people, by the people and for the people.

Of course, this history is as many other histories are: completely subjective. Howard Zinn for those who don’t know is a heavy proponent of socialism. His writings and speeches reflect a heavy emphasis on minority rights and anti-war/anti-conquest ideals. He also surrounds himself with people (in particular those of the entertainment industry) that support these ideals and use their media to project these thoughts and influence others. For lack of a better term, he’s an extreme liberal.

That aside, I’m not here to discuss whether he is right or wrong, it is simply a shared view between him and the people he has chose to perform on this special. I do however find that in this attempt at a “true history of the United States”, that what he presents is completely slanted towards his teachings and the ideals he represents. Let me set something straight, I’m not saying he is speaking about lies or mistruths.

These speeches are obviously from people who lived through great strife and overcame impossible odds. But history teaches us that there are two sides to every coin. The only thing that Howard Zinn has done is taught us the other side of the coin. True history is representative of both sides and leaves the reader to form their own opinion, not be pushed in the direction we wish for them to go.

Using an example, Howard Zinn speaks out against our current conflicts against Iraq and Afghanistan. In particular, he actually goes on record and says that America used 9/11 and Pentagon attacks for the purposes of a power trip and violent revenge against these nations. That is not history. That my friends, is an opinion about what American did after the attack of 9/11. For the record, I probably would have walked out of the performance at that point.

That aside, I did enjoy some of the performances from the entertainment industry. Morgan Freeman was incredibly spirited as he recited a speech from Frederick Douglass, no wonder he’s donned that character a time or two in his work. Viggo Mortensen’s performances are worthy of mention as he seems to channel whoever’s words he is speaking at the time. Complete with applicable accent. I also enjoyed Bruce Springsteen’s performance at the credits. He is an incredible musician.

The video is presented in 1:78 anamorphic widescreen. It’s adequate for the type of performance. Colors are pretty well defined and it is what you would expect for something produced on a stage. It is fairly average and does a good job of capturing the images of the actors. There really isn’t much to talk about here and I simply couldn’t find anything positive or negative about the quality.

The audio is presented in 5.1 Dolby Digital Surround Sound (2.0 mix is also included). The performance has two parts, one is straight dialogue or performance speaking. The other is the musical sections that show up every now and then. Everything was certainly clear and the music did get a little louder than the talking parts. It is as special as the people performing: nothing less, nothing more.

Most people know that I can turn a review on its ear by using heavy doses of sarcasm and wit to get my point across. I easily could have mentioned that P!nk was better off donning a pirate hat and singing songs for Spongebob Squarepants than performing here. But I chose a straight up critical review of this dvd and did my best to expose the performance for what it is: another person’s view of the history of the United States.

Right or wrong, it is still not the truth (as many would lead you to believe, thank you Mr. Brolin), it is merely an opinion. History, as said before, is both sides of the coin. The disc is average and contains the expected extras. My recommendation is to read the Wikipedia entry for Howard Zinn and about the first 100 pages of A People’s History of the United States. Then decide for yourself how much deeper you wish to go. Maybe someday, there will be a history book that lets you form your own opinion rather than create one for you. 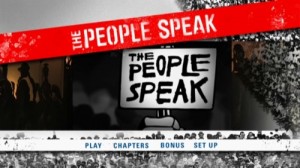 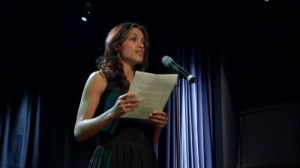 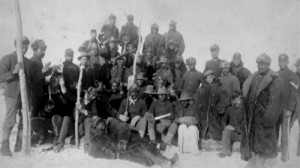 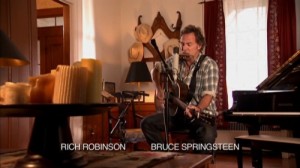 Michael Durr has been reviewing movies for the better part of fifteen years now. He primarily enjoys thrillers, sci-fi, animation and even a little courtroom drama. His favorite films include Escape from New York, the Goonies and anything with Alyssa Milano. When he’s not praising Kurt Russell as the greatest actor of our time or scratching his head over a David Lynch flick, he’s spending time at home in Texas with his lovely wife, Lori and his amazing son. How they put up with him is a mystery, but even Basil Rathbone doesn’t have the time to solve that one.
I Hate Valentine’s Day Scooby Doo: Abracadabra-Doo