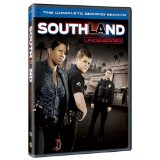 “Look sharp, act sharp, be sharp. These guys coming out of prison? They’re buff, been on drugs. You do what they teach you in the academy, you will die. Knucklehead wants to take your gun. So if it’s you or some 300-pound naked guy on PCP, you take his ass down any way you can. You ride with me, you back your badge.”

There probably isn’t a group of people who have been profiled more than the men and women serving in the LAPD. It doesn’t take a rocket scientist to figure out why. It’s a large city with an incredibly diverse population. Oh, and it doesn’t hurt any that Hollywood’s a part of this particular asphalt jungle. So we get to see a lot of L.A. or New York cops on television. Even long before Jack Webb was asking for the facts and only the facts, the cops of L.A. have had more than their fair share of screen time in film and television. With that in mind, it is awfully difficult to do anything new with the LAPD.

The first season of Southland was, unfortunately, a very brief one. There were only 7 episodes on 2 discs. But it was enough to introduce you to the characters and get you looking for more. Officer John Cooper (Cudlitz) is a veteran patrol officer. He is now working as a training officer for rookie officer Ben Sherman (McKenzie). He’s a no-nonsense officer with a reality-based philosophy of the streets. He’s not interested in Ben’s book smarts. He wants to sharpen his street skills, and he’s going to be looking for what level of commitment Ben is willing to give to the job. In his mind a cop becomes a cop because they don’t know how not to be a cop.  The focus of the show is on these guys out in the street. Other officers include Dewey (Howell). He’s an alcoholic and a hotshot who is just a hair’s breadth from getting run out of the force. His partner Officer Chickie Brown (Bareikis) is running out of patience and might just turn his behind in. The precinct also has a few detectives who get some screen time here.  Detective Adams (King) is a black female officer who cares too much about the people she’s hired to protect and serve. Unfortunately, we get too much of her tumultuous love life. She’s also taking care of her elder mother. Nate (Alejandro) and Sammy (Hatosy) are the young detective partners who still have fresh ideals and a heck of a nonstop work ethic. Joining the detectives this year is a favorite of mine from Prison Break, Amaury Nolasco playing Detective Cordero.

I thought we’d see a larger second season, but that’s not the case here. This time there were only 6 episodes on 2 discs. It also appears that sales have been disappointing for Warner. This season is not available as a mass production. It’s a DVD-R on-demand release. In some ways I find that disappointing because I thought the show was good enough to hold its own. But I’m also glad that Warner found a way to keep the show releases coming.

Each episode no longer begins with one of Cooper’s sage lessons in copology. The cases are all still pretty much straightforward. This series is less about the cases and more about the cops and the procedures. It’s not without its light moments. I’m reminded of Third Watch here, and that shouldn’t come as much of a surprise when you consider that John Wells is involved with this show as well as Third Watch.

Look. The thing’s only 6 episodes and not a lot of dough now that it’s an on-demand release. What have you got to lose here? I’ve seen enough cop dramas to have become as jaded as Elvis Presley’s underwear. It really has gotten hard to get me to stop and take notice of a new cop show. This one has, and I highly recommend it to you. It could very well be the next Shield. “Every victim has a story.”

Check out the release from Warner Direct. Bang it here to get a closer look at Warner Archive Collection

Gino Sassani is a member of the Southeastern Film Critic's Association (SEFCA). He is a film and television critic based in Tampa, Florida. He's also the Senior Editor here at Upcomingdiscs. Gino started reviewing films in the early 1990's as a segment of his local television show Focus. He's an award-winning recording artist for Omega Records. Gino is currently working on his 8th album Merchants & Mercenaries. Gino took over Upcomingdiscs Dec 1, 2008. He works out of a home theater he calls The Reel World. Favorite films: The Godfather, The Godfather Part II, The Body Snatcher (Val Lewton film with Karloff and Lugosi, not the pod people film), Unforgiven, Gladiator, The Lion King, Jaws, Son Of Frankenstein, The Good, The Bad And The Ugly, and Monsters, Inc.
Supernatural: The Complete Second Season (Blu-ray) The Glades: The Complete First Season