Posted in: Disc Reviews by Archive Authors on October 28th, 2011 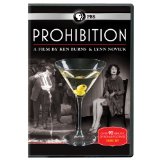 Ken Burns has achieved a rare feat in the world of filmmaking: he makes clean, concise, uncontroversial documentaries and yet has somehow become a household name, or as close as any documentarian can get in this society. It also depends, I suppose, on the ratio your household’s television is tuned in to PBS compared to, say, Spike TV. Burns has made his name making huge, sweeping films that take in gigantic aspects of American history and culture, like The Civil War, Jazz, and my personal favourite, Baseball. His latest documentary, which he co-directed with Lynn Novick, ranks right up there with his best work. Prohibition is vast, covering a huge time period in American history, contains tons of detail, and still manages to be focussed, concise, and tremendously entertaining.

The first part, A Nation of Drunkards, starts its story before the Civil War. It sets the scene by painting a picture of a nation obsessed with alcohol. Saloons are such an integral part of the landscape that huge numbers of the working class and immigrant labourers were giving up most of their pay buying liquor. Spousal and child abuse was rampant, and Temperance Unions grew out of the need to protect and shelter women and children from abuse and neglect as much (or more) than they did out of religious zealotry.

The film follows the history of these issues all the way through to the repeal of Prohibition in 1933, keeping the proceedings entertaining and enlightening throughout. The first part plays out much like Burns’ Civil War, with lots of still photos and voiceovers mixed in with talking head segments featuring historians and other authorities on the subject. But as the narrative enters the 20th century, Prohibition features more and more film footage. And not the kind of stock footage you typically find in lesser works about the period, but authentic, seemingly new material.

Prohibition clocks in at six hours, but manages to keep you invested from start to finish, and one of the ways it accomplishes this is by telling its story in a variety of different ways. We get tales of rum-runners and speakeasies, politicians and gangsters, teen hoodlums, flappers, and vicious gang wars. All through the narrative, we’re taken on fascinating little side-trips to meet colourful characters from the era, and almost everything is backed up by the amazing film footage mentioned previously. And no review of this film would be complete without mentioning the stellar work of Prohibition’s voice talent. It is narrated by Peter Coyote, but also features a large cast of actors, most notably Patricia Clarkson, Tom Hanks, Paul Giamatti, and John Lithgow.

By the time it is done, Prohibition has painted a vivid picture of a nation founded on principles of freedom and individual rights is transformed into a nation of law-breakers. How a movement that started with the best intentions was taken over by extremist groups based on hate, intolerance, and a hard-headed refusal to consider compromise. And how that movement damaged the nation that it claimed to love, almost to the point of irrevocability. This, like the best Burns documentaries, ties its subject matter in with issues that are still of major consequence to Americans. Questions are raised about the role of government, the rights of the individual, and who is and who is not a “real” American. Sound familiar?

Prohibition is presented in 16:9 Widescreen, and looks beautiful. The photos displayed are wonderfully clear and detailed, and the film clips have either been restored to a pristine condition or were somehow found in a vault somewhere and had somehow never been touched. I can’t express how impressed I am with the quality of the footage contained here.

The audio is presented in 5.1 Surround, with an optional Spanish stereo track included. Subtitle choices are English and Spanish. The film contains nothing particularly wow-worthy audio-wise, but the voice work is recorded and mixed with great clarity, and the music keeps things hopping nicely, with some great tracks selected, especially the Twenties jazz.

In the Studio with Florentine Films (7:39): An interesting featurette that chronicles the recording of much of the voice talent, and an examination of the music choices and their recording.

Bonus Scenes (27:23): A series of clips that were removed from the film, presumably to keep its time to six hours.

Interview Outtakes (57:43): Much like the bonus scenes, there is some fascinating material here, and I have to assume it was not included due to time restraints.

There is a lot of material crammed into Prohibition. By the time the film is over, it’s actually hard to believe that this much information was squeezed into a six-hour documentary. If you’re a fan of Burns or documentaries in general, purchasing this is a no-brainer. If you’re more of a casual viewer who watches the odd doc, you should probably still purchase this disc. For everyone else, switch off that MMA match you’re currently watching and at least give this thing a rental. You might surprise yourself.